A recent poll by the Jewish Electorate Institute shows that at least 25 percent of American Jews believe Israel is an apartheid state. So why does the political class and the mainstream media continue to paint criticism of Israel as anti-Semitic? 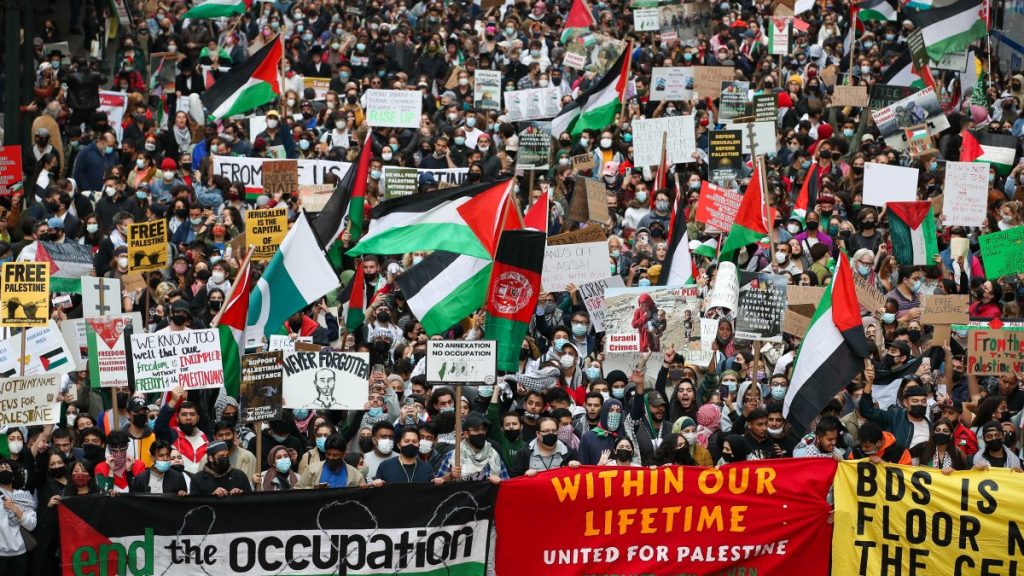 Israel’s bombing of Gaza and repression of Palestinian protesters in the West Bank and East Jerusalem in May, which killed nearly 300 people, sparked political discussion in the United States about Israel’s legitimacy and U.S. military aid — and frenzied ruling-class defense of Israel. In the 13 years of “conflict” since 2008, Israel has killed approximately 6,000 Palestinians to strengthen its colonial rule, whereas acts of resistance and retaliation by Hamas and other Palestinian organizations have killed fewer than 300 Israelis in the same period. In 2018, the Israeli army shot 183 unarmed protesters dead simply for trying to cross the Gaza border fence. Israel has annexed East Jerusalem. The settlements in the West Bank are slow-motion annexation. Israel’s most recent bombing campaign, which it characterized as “self-defense,” killed 67 Palestinian children.

In July the board of U.S. ice cream company Ben and Jerry’s announced that it will allow its contract with its Israeli partner company to lapse next year in order to sell its ice cream in the 1948 borders of Israel but not in the West Bank and East Jerusalem. (Boycott, Divestment, and Sanctions [BDS] activists have for years boycotted Ben and Jerry’s and demanded that it divest from business in the West Bank.) This was met with a backlash by essentially all Israeli politicians and by U.S. Republicans and Democrats denying that Israel oppresses Palestinians. The American political establishments call even limited boycotts of Israel forms of aggression and anti-Semitism. The Wall Street Journal and later the New York Times ran op-eds deriding the idea of boycotting Israel.

New Israeli prime minister Neftali Bennet made a personal call to the CEO of the Unilever mega-corporation that owns Ben and Jerry’s to threaten legal consequences. Israeli ambassador to the United States, Gilad Erdan, sent letters to 35 governors requesting they use recent state laws against BDS targeting Israel to cancel “commercial dealings” with Ben and Jerry’s, and officials in New York, Texas, Florida, Illinois, and New Jersey announced that they would consider divesting state employee pension funds from Unilever stock.

Erdan dared to accuse the board of Ben and Jerry’s of “anti-Semitic practices.” Israel jumps to slander and dismiss even the most tepid bourgeois liberal critics, including former company heads Ben Cohen and Jerry Greenfield who in a New York Times op-ed called themselves “Jewish supporters of the state of Israel” who want Israel to stay in what they call its “democratic borders” — borders actually created by conquest and ethnic cleansing — and indicated that they oppose the BDS movement and Palestinian exiles’ Right of Return.

There is a low-level conflict between the Ben and Jerry’s board, which preaches socially progressive capitalism, and Unilever. The huge Euro-American food and personal care products corporation bought Ben and Jerry’s in 2000 but allowed the company board to maintain social policy autonomy under a special contract clause. Unilever’s CEO responded to the Ben and Jerry’s settlement divestment: “Unilever remains fully committed to our business in Israel.”

The U.S. establishment arrogantly rejects the most limited recognition of Palestinian humanity. However, a large sector of American Jews have begun to oppose Israel. In July the pro-Democratic-Party Jewish Electorate Institute (JEI) published a survey of 800 American Jews who are registered to vote. 25 percent of participants agreed with the statement, “Israel is an apartheid state,” including 38 percent of those 18 to 39 years old.

The argument promoted by the U.S. and European governments that “delegitimization” of Israel is anti-Semitic is bullshit. There is now a big gap between U.S. imperialism and the views of many ordinary American Jews. Capitalist politicians dismiss, lie about, and censor the reasons for international solidarity with Palestinians. The cognitive dissonance suggests how Palestinian solidarity could land blows against the U.S. state. But we can only build the internationalist Left on solid ground and become stronger if our politics expose and fight the bourgeoisie, telling the truth and criticizing all the capitalist politicians, rather than hoping to make deals through the imperialist Democratic Party.

While the U.S. media covered the Ben and Jerry’s affair continuously, usually without mentioning Israeli war crimes, the New York Times did not report at all on the JEI poll. The Washington Post covered it in a deceptive article titled “Jews Like Biden,” highlighting the fact that a large majority of American Jewish voters continue to prefer Democrats over Republicans but totally omitting results about criticism of Israel. This was censorship: Ha’aretz and the Times of Israel had both republished an article highlighting the massive number of American Jews accusing Israel of apartheid.

Very young people and those not registered to vote are likely even more anti-Zionist than those included in the JEI survey. One fifth of the poll respondents directly supported apartheid by saying they would like Israel to annex the West Bank without giving Israeli citizenship or the vote to its Palestinian residents. But another fifth of the respondents favored a the creation of “one state that is neither Jewish nor Palestinian” in all of Palestine. JEI respondents were polarized between these two groups, with 60 percent in the middle supporting the “two state solution” verbally promoted by the United States before former president Donald Trump, which is impossible today because of Israeli policy, most obviously the settlements.

The Democratic Party is totally committed to continuing military aid for Israeli colonialism. In May, four (Jewish) Democratic House members, Dean Phillips, Josh Gottheimer, Elaine Luria, and Kathy Manning, wrote a letter accusing Alexandra Ocasio-Cortez, Rashida Tlaib, and Ilhan Omar of anti-Semitism for saying Israel was committing apartheid and terrorism. There is no way to fight Israel from inside the Democratic Party. Even though Ilhan Omar said, “Israeli airstrikes killing civilians in Gaza is an act of terrorism,” she recently voted yes on H.R. 4373, a bill which includes $3.3 billion of U.S. military funding to Israel, in addition to weapons for the brutally repressive Egyptian and Colombian governments. Jamaal Bowman, a DSA member and endorsee recently elected to the House, also voted yes on H.R. 4373.

After the May “ceasefire,” Bernie Sanders went on CBS, and when the host argued that calling Israel an “apartheid state” contributes to anti-Semitism, he replied, “I think we should tone down the rhetoric.” While calling, ineffectually, for a temporary halt to U.S. arms supplies to Israel, Sanders blamed the conflict first on Hamas and second on the “right-wing government” of Benjamin Netanyahu in Israel. Sanders’s argument that Israel as a state and a social system is not fundamentally racist, that oppressive Israeli actions stem from now ex-prime-minister Benjamin Netanyahu, and that the U.S. government ought to “lead the way to a peaceful future” in Palestine are deceptive. Three weeks later Netanyahu was replaced by a new coalition government, which has not in any way taken the Israeli boot off Palestinians’ throats.

In the United States today we see embers of radicalism among sectors of workers and youth. But supposedly progressive political leaders within the Democratic Party offer neither matches nor fans. Rather, they step on the embers to put them out.

We Must Demand a Democratic, Secular Palestine

The path to Palestinian liberation is the dissolution of the state of Israel, and its replacement with a democratic, secular Palestine in which Jews and Arabs can live together and the rights of all ethnic groups are respected. This territory would include all of what is currently the state of “Israel,” along with Gaza — which the Zionists today control as a fenced-in, jet-patrolled ghetto — and the West Bank. In other words, we must demand Palestine from the river to the sea.

To be democratic, such a state must have no privileges and no powers set aside for Jews over Palestinians. All of the State of Israel’s military and police forces would have to be completely broken up and abolished. The 6 million Palestinian exiles and those expelled an displaced within Palestine, for example in Gaza, must have the absolute right to return to any and all land and homes that they or their grandparents were forced out of, with access to jobs, compensation, etc. All segregated institutions and services used by Israel have to be taken over or dissolved. All educational institutions would have to be made accessible without discrimination and used for national liberation purposes.