10 Points to Understand the Gasolinazo Protests in Mexico 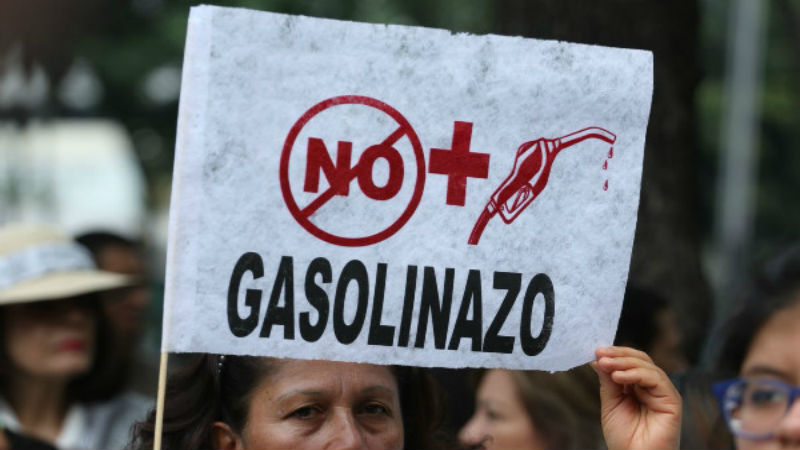 Since January 2, dozens of thousands of people have mobilized against the “gasolinazo” and against the Peña Nieto administration. Tensions are high in Mexico as people await the Trump inauguration and there is a deep level of anger towards the government, not only due to the gasolinazo, but due to the history of government repression and Peña Nieto’s meeting with Trump.

According to several analysts, the decision to increase gas prices is the worst mistake that Peña Nieto’s discredited government has made so far. Since the first day of this year, gas prices have increased by 14.4% for Magna gas, 20.1% for Premium and 16.5% for diesel. The current inflated prices will only increase after until February 3.

This is yet another step in ending state control in the oil industry, which began with the nationalization of oil in 1938. Since then, steps have been taken to privatize the industry. The Mexican government has long subsidized gas prices to control against fluctuations. In order to attract privatize investors to Mexican oil, the Peña Nieto administration will allow gas prices to fluctuate according to the market by the end of the year.

In this article we lay out some key elements to understanding the seemingly endless crisis of the Mexican administration.

1. Peña Nieto had stated that there would be no further increases in gas prices on January 4, 2015. However, almost immediately following this announcement, the opposite occurred., The current gasolinazo takes place after a series of progressive increases since 2015. Gas prices will continue to rise as determined by an unfettered market which has tossed the Mexican peso into chaos with the rise of the Trump administration. Last week, the peso hit a record low when the Trump administration tweeted against General Motors’ plan to open a plant in Mexico.

2. Throughout Peña Nieto’s administration, there has been a 32% increase in Magna gas prices; 38.1% in Premium gas and almost 37% in the price of diesel. In 2017, the minimum wage was 80.04 pesos and the average maximum price of Magna gas was 15.99 pesos per liter. Only five liters can now be bought with one day’s worth of minimum wage, compared to 30 liters in 1979.

3. Gas prices are tied to dollar prices, which have increased continuously (the exchange rate is currently 22 Mexican pesos per dollar) since Donald Trump launched his electoral campaign against immigrants and NAFTA, threatening to walk away from the agreement. This is compounded by the risk of inflation: the rise in gas prices has already led to an increase in both electricity and market baskets , which has had a severe impact on working class families. Even before these announcements, Mexican economic growth forecasts were dismal. A mere 1.3% to 1% is projected for this year. This situation is aggravated by the immense foreign debt, which is currently over 50% of the country’s GDP.

4. According to a map issued by the US Energy Information Administration, benchmark gas prices on the Gulf Coast of the United States are 2.08 dollars per gallon (3.78 liters). With the current exchange rate, a liter of gas in the US is 22% cheaper than in Mexico.

5. Meanwhile, the Nieto government – with the complicity of the oil union bureaucracy led by Carlos Romero Deschamps- has continued the stripping funds from the parastatal company Petróleos Mexicanos (Pemex) and selling its facilities and oil fields for the benefit of big multinational corporations. This is the practical application of the energy reform designed by Hillary Clinton’s team when she was Secretary of State. The government and the media have proclaimed that Pemex is going through a crisis, justifying giving energy production back to private capital, reducing funding for operation and maintenance, and laying off tens of thousands of workers in order to cut production and speed up privatization.
One of the consequences of accelerated privatization is that Mexico has become an importer of fuel and has opened its market to private distribution and marketing. Companies like Oxxo-Gas and Petro-7, among others, are thus the main beneficiaries of the gasolinazo.

6. But it’s not all numbers. Peña’s administration has been hit hard by the crisis caused by the kidnapping of the 43 college students of Ayotzinapa and the Iguala massacre, which led to his fall from grace in the eyes of the media and most of the Mexican people. After Ayotzinapa, his attempt to impose educational reform was met with resistance from teachers’ colleges in several states. The response was the Nochixtlán massacre in Oaxaca in June 2016, which has gone unpunished. Teachers’ colleges received widespread support nationally and internationally, creating a movement that took to the streets against repression. In spite of the teachers’ willingness to fight, the leadership of the Coordinadora Nacional de Trabajadores de la Educación (National Teachers’ Union [CNTE]) has prioritized negotiation and dialogue with the government, and the teachers’ colleges have retreated, without achieving coordination with the entire working class.

7. After then candidate Donald Trump visited Mexico while on the campaign trail, a new chapter began in the crisis of Enrique Peña Nieto’s administration. Trump was welcomed as a head of state when he had not yet won the elections- in a show of servility that is characteristic of the Mexican political caste, always willing to kneel before whatever imperialist master happens to be in power. Today, that master is the xenophobic tycoon who based his electoral campaign on a slew of insults and threats against Mexican immigrants and is widely repudiated to the south of the Río Bravo.

8. Emerging from this context, a massive wave of protests as well as blockades of roads and gas stations blocks have taken place against the gasolinazo in all 32 Mexican states. These actions have been carried out by truck drivers, motorists, inhabitants of small towns, farmers, young people and teachers. Meanwhile, Peña Nieto’s government, the business class, multinationals and mass media focus on cases of vandalism and use it as an excuse to deploy the police force and army.

9. On Thursday, Peña Nieto went on national television to defend the gasolinazo, arguing that there was no other choice for the government. “What would you have done?” he asked. The response was overwhelming, with Twitter flooded by suggestions from everyday Mexicans who understand that the gasolinazo is not necessary, but rather a measure to force workers to pay for the economic crisis.

The Peña Nieto is increasingly alone in defending the gasolinazo, as right wing and left wing opposition parties speak out against the measure. However, many of these same political parties voted in favor of the gasolinazo when it was approved in October.

10. The people’s rejection of the gasolinazo objectively challenges the country’s subordination to the plans of US imperialism. Andrés Manuel López Obrador, national leader of the party Movimiento Regeneración Nacional (Morena) has indicated that its representatives and senators did not vote in favor of the gasolinazo. Obrador promotes the policy of “civil and peaceful resistance” – i.e. waiting for the 2018 elections to “remove the PRI from office” by voting. This prevents the current movement in streets from spreading and becoming more radicalized- a weak strategy that is powerless in confronting the situation. For our struggle to triumph, it must break the economic, political, military and diplomatic chains imposed on Mexico by the United States.