Who is behind the fires being set in the Amazon? What is happening to the people displaced because of deforestation? What consequences will this have for the environment? Here are the ten things you need to know about the fires currently consuming the Amazon basin. 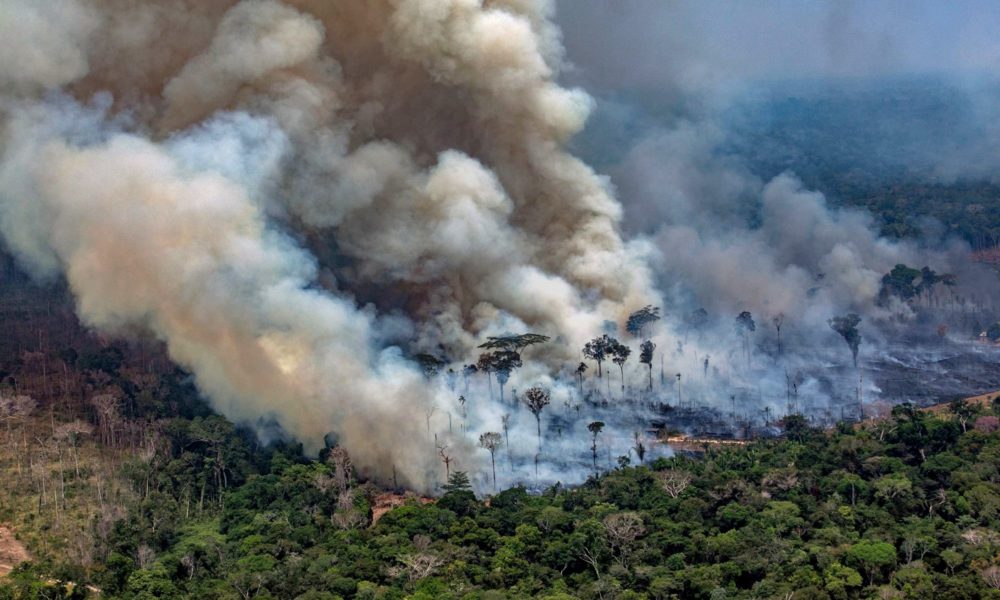 The world is watching in horror as pictures circulate of huge stretches of the Amazon rainforest in flames, but these are no ordinary wildfires. They were set on purpose to generate immense profit for a few multinational companies and the bourgeois governments that support them. Urgent action and mobilization of working people and activists around the world is necessary to put an end to the capitalist exploitation that is destroying one of the Earth’s most important ecological regions. Here’s what you need you need to know about the fires and those responsible for them:

1. Deforestation Fires Have Burned the Amazon for Decades

The peoples who inhabit the Amazon have suffered the destruction of the rainforest for decades. The Brazilian military dictatorship of 1964-1985 seized 6 million hectares of land from indigenous populations, in part to construct the immense Trans-Amazonian highway. Forest fires were used to clear the land, displace its ancestral inhabitants, and to build cattle ranches and farms. From the beginning, multinational companies such as McDonald’s were involved in this devastation, funding suppliers who destroyed and continue to destroy large swaths of the rainforest to grow products like soy in large quantities for export. The fires were so great that in 1987 they destroyed a territory equivalent to the total area of Switzerland. During the land seizures, ranchers and large landowners organized armed gangs to subjugate the communities and leaders of the resistance against the destruction of the Amazon, among them Chico Mendes, the activist and founder of the rubber workers’ union. Mendes’ life was portrayed in the 1994 film “The Burning Season,” which chronicles this period of destruction of the Amazon.

2. Fires Have Increased by 85% Under Bolsonaro’s Government

Brazilian President Jair Bolsonaro, who calls himself “Captain Chainsaw,” made an inflammatory speech against the protection of environment, no doubt in an appeal to the agricultural and livestock producers who make up a fundamental part of his support. In Congress, the power of the rural representatives is linked to agribusiness (most of them are members of the Democratic Movement of Brazil) and is a decisive force in the government. When he first came to power, Bolsonaro said very clearly to this sector: “this government is yours” and he has kept that promise. Bolsonaro’s Minister of Agriculture, Tereza Cristina, comes from this same sector. Both the president and his administration have spoken out against taking forest protection measures and have favored greater commercialization of the Amazon territory. Even Bolsonaro’s Minister of the Environment, Ricardo Salles,  defends this policy. In the last decade, the forest fires have increased steadily, and so far in 2019, there have been more than 70,000 fires. In August alone there were more than 30,000 fires.

The governments of the PT (Workers’ Party of Brazil) also favored agribusiness. For example, a series of reforms to the Forestry Law, approved by the government of Dilma Rousseff, allowed amnesty for those responsible for illegal deforestation and reduced the number of protected areas in the jungle and savannah. The ex-president authorized German mining companies to operate in the region before she was overthrown by the institutional coup d’état. In Bolivia, President Evo Morales, despite his rhetoric in favor of the rights of indigenous peoples, endorsed burning the Amazon with a law that authorizes “controlled” clearing and burning of forests in both private and community areas.

4. A Handful of Multinational Companies Are Helping to Destroy the Amazon

Bolsonaro and the agricultural bourgeoisie of Brazil are not the only ones who want to destroy the jungle for their capitalist enterprises. Important imperialist companies are behind the deforestation as well: Credit Agricole and BNP Paribas (France), financial groups like Blackrock and Capital Group (United States), and pharmaceutical companies like Johnson & Johnson also have business in the area. Other multinational companies responsible for doing business with this devastation are grain producers; Cargill, Bunge and Archer Daniels Midland (ADM) control 60% of the soybean industry in Brazil and directly benefit from the forest fires, as do agrochemical companies such as Monsanto and Bayer. France and Germany also have direct interests in mining in the region. The involvement of these companies reveals the hypocrisy of the apparent opposition to Bolsonaro’s policies by governments such as that of Emmanuel Macron in France. Imperialist capital gains millions by setting the Amazon on fire.

5. “Green Capitalism” Won’t Save the Rainforests

The Amazon has become a disputed territory for different capitalist sectors; some of them use the rhetoric of environmental protection to describe their business in the region, but all of these companies are ultimately only interested in  continuing the exploitation of commodities in the Amazon basin. They produce certified wood, regional products and eco-tourism, all of which take their toll on the environment. In addition, these “green” companies also pursue carbon credits, which allow them economic benefits if they show more environmentally friendly production processes. Corporations linked to the pharmaceutical and cosmetic businesses are demanding a “controlled” Amazon, which will allow them to patent their products and regularly use the resources provided by the forestlands. Roche, Bayer, L’Oreal, Unilever, are only a few of these types of companies. The primary materials they extract with only basic regulations guarantees them new products for a public interested in natural or “ethical” products.

6. More Than a Million Indigenous Lives Are in Danger

The nearly 350 indigenous peoples who inhabit the Amazon basin in Bolivia and Brazil are suffering the devastating consequences of deforestation. They are not only victims of smoke inhalation and burns directly caused by the forest fires, but they are also victims of the diseases spread in the area, such as influenza and measles, and of fraud by swindlers who forge documents in order to sell indigenous lands to other capitalists. The construction of dams and jungle routes also forces them to leave their homes. Some groups, such as the Awá people, are in serious danger of disappearing completely. Those who survive this displacement travel through the jungle to make a living from hunting and fishing. Many of them are subsequently pursued by mercenaries hired by landowners to protect the territory taken from the indigenous people by force. These hired killers have murdered numerous environmental activists over the years.

7. The Fires Have Disastrous Environmental Consequences

The vast amount of burned territory in the Amazon rainforest will have drastic effects on the environment. To start, the trees in the region produce 20% of the total oxygen in the atmosphere. Their destruction can rapidly accelerate global warming and increase the overall temperature of the planet.

Drought and warming will be very harsh as a result of an increase in the overall temperature of the area, generating new sources of fire in other affected territories. Another direct effect of the fires is the loss of many species of flora and fauna, the cruel consequence of which can be seen in the images of dead animals, burned alive and displaced from their habitats. In addition, carbon dioxide and other chemical compounds emitted by the fire will accelerate the greenhouse effect.

As indirect consequences of the fires, the Earth’s water balance will change: with the accumulation of greenhouse gases from burning trees, more and more energy is retained in the atmosphere. This causes a warming of the temperature of the earth, the oceans and the atmosphere, contributing to the melting of ice surfaces and the evaporation of existing bodies of water. Energetic balance will change as well: smoke particles retain solar radiation and prevent it from returning to the atmosphere, affecting the photosynthesis and inhibiting the growth of plants.

Fires will be more likely to occur because of the change in the hydrological cycle, which means a less dense and humid forest. A less humid forest provides fewer clouds to the atmosphere, resulting in less rainfall. In other words, the amount of rain could be cut in half  in São Paulo and Rio de Janeiro, two of the largest cities of Brazil.

Latin American scientists have explained that it is not possible to fully predict the effects of the fires, but they do know that the fires will undoubtedly result in a profound transformation in the soil and the environment. Climate change deniers like Trump and Bolsonaro are trying to discredit the warnings of indigenous peoples and environmental organizations, but the consequences are undeniable and increasingly dangerous.

The inhabitants of the Amazon and its surrounding cities also suffer health consequences as a result of the fires. Respiratory problems, loss of oxygen in the blood, and heart disease are increasing rapidly in the region. The dense smoke from the fires mainly affects the poorest families in the affected areas, who live in poorly ventilated houses and cannot afford to flee the fires. As the fires continue, steep decreases in air quality will directly affect working families, particularly children, who cannot afford appropriate medical care. In addition, the dryness and increased heat from the fires put homes at risk of catching on fire and families at risk of being displaced.

9. The Amazon Isn’t the Only Region Being Destroyed for Agribusiness

The magnitude of the fires in the Amazon rainforest is causing a grave crisis, but it is not the only area where nearly unregulated deforestation is being used to generate billions of dollars in profits. Other forests are at serious risk, such as the Siberian forest, where 2.5 million hectares have already been destroyed. The same is true in vast regions of Southeast Asia, where 71% of the region’s characteristic wetlands were lost to free up land for the lucrative palm oil industry, used for food and cosmetics.

10. Demonstrations Around the World Are Calling for the Protection of the Amazon

Throughout Latin America and around the world, there have been several important demonstrations that have denounced the Amazon fires and the part that governments and corporations have played in destroying this region. The youth movement that organizes the #FridaysForFuture, as well as thousands of other people around the world, protested outside of Brazilian embassies to demand urgent measures against these devastating fires. Hundreds of thousands of people across the world are expected to participate in the Global Climate Strikes in September. Many agree that the governments and capitalist businesses involved in the region are responsible. A collective response from the working class and youth, indigenous peoples, and peasants affected by this terrible destruction is the only way to end the extermination of entire peoples and the devastation of the environment.