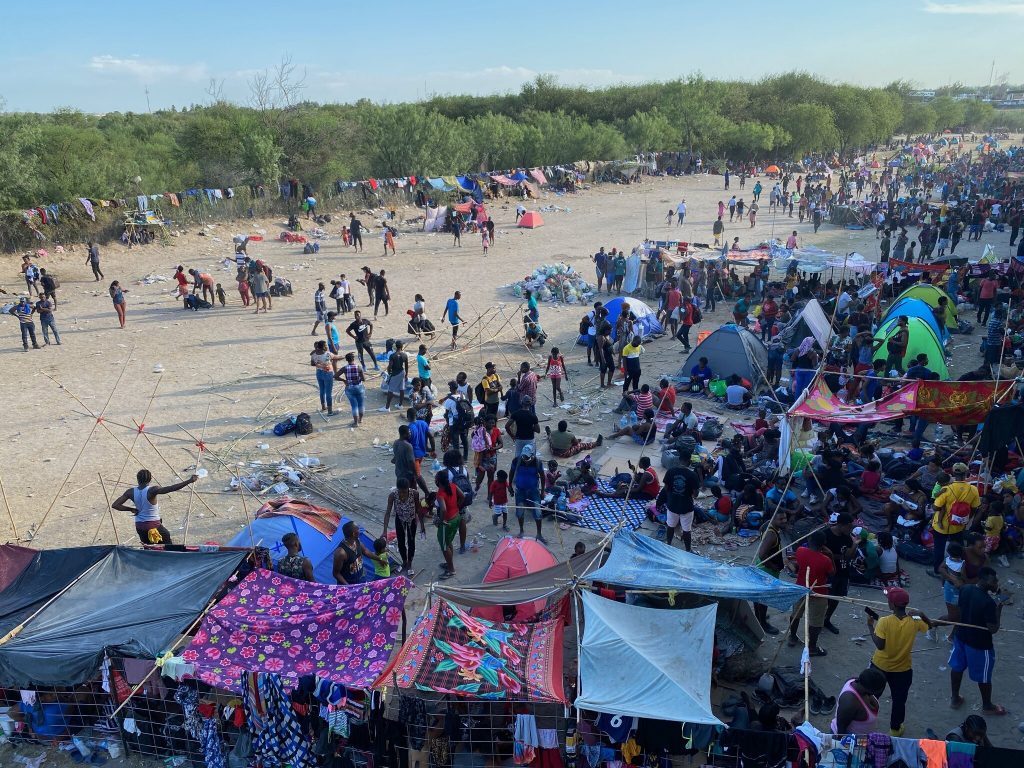 A huge humanitarian crisis has unfolded at the border crossing from Ciudad Acuña, Mexico, into Del Rio, Texas. As of early last evening, there were about 10,500 migrants in a makeshift camp under the Del Rio International Bridge — an increase of 3,300 just over the course of the day. They are trying to survive in the shade under dangerous, squalid conditions, with hardly any food or water.

The New York Times describes “dense crowds sleeping on dirt or milling about in triple-digit heat amid conditions of deteriorating sanitation.” The Del Rio mayor called it a shantytown. Reuters describes “hundreds of migrants wading through the Rio Grande river back into Mexico to stock up on essentials they say they are not receiving on the American side.”

These migrants are overwhelmingly from Haiti, but also include some Venezuelans, Nicaraguans, and others, all fleeing unbearable conditions in their home countries. The Haitians in particular have most recently had to endure natural disasters and the assassination of the country’s president, which has precipitated a new round of brutal violene in the poorest country in the Western Hemisphere.

There is only one response: Let them all in!

Restrictive immigration is a tool of capitalism. Each and every day, the murderous results of closed borders reveal that nothing is more important to a system based on exploitation than increasing the rate of that exploitation. That’s why capitalist states limit the free movement of the great majority of people — the working class — between countries. A demand to let all migrants in is a start to undoing divisions deliberately sown by our class enemy to serve the bosses.

Likewise, there is only one direction to point the finger of blame for the current conditions of these migrants: U.S. imperialism, today embodied in the Biden administration. Since Biden’s inauguration, the overcrowded concentration camps for migrants remain open and child detention continues. All of this — and the situation in Del Rio — could be resolved if Biden and the Democrats wanted it to be. The horror is on them.

As a candidate for president, Joe Biden promised to “secure our values as a nation of immigrants.” Reviewing a position paper released by the Biden–Harris campaign in the context of today’s crisis at the Del Rio port of entry reveals the emptiness of that promise. “It is a moral failing and a national shame when a father and his baby daughter drown seeking our shores,” the document begins. It proceeds to spell out a long list of things Biden would do in his first 100 days. But while the Biden administration has rolled back some of the most egregious programs of the Trump administration, the document was mostly lies. Biden and the Democratic majority in Congress has failed to take decisive steps to avoid these crises — just as the Democratic Party refused to do so when it last held both the executive and legislative branches of government during the Obama presidency.

U.S. imperialism’s responsibility goes back generations. Haitians have no recourse but to leave their own country because it has been beaten down into squalor over the centuries, under successive imperialisms, as punishment for a successful revolt by self-liberated enslaved people that began in 1791 and ended in 1804. That revolution established the first Black republic in the world. In the 20th century, U.S. imperialism became Haiti’s primary subjugator and repressor through direct intervention, propping up brutal dictatorships, and rapacious theft of the country’s natural resources.

The Del Rio situation promises only to worsen. “Both migrants and Mexican officials said many more people are expected in coming days,” writes Reuters, reporting that some told reporters “they had chosen to cross here because the river is shallow and they felt there was comparatively less cartel activity.”

On the Mexican side of the border, migrants are also terribly repressed by the government of Andrés Manuel López Obrador (AMLO), Mexico’s president.

For those already in Del Rio, it is a daily existence spent largely jostling for shade under the bridge. Most have not been fed, despite the U.S. Border Patrol claiming in a statement that it has increased staffing to facilitate “safe, humane, and orderly” processing of the migrants and that it is providing “drinking water, towels, and portable toilets.” Social media reports show little evidence of these steps, which are far from enough.

Migrants at the U.S border are fleeing poverty and violence in their home countries, and we must show our active solidarity. It’s time for a new movement in defense of their rights, just like the one that erupted immediately after Trump’s “Muslim ban” went into effect — when people streamed to airports across the country to protest. Such a movement must be one we organize as a class, with no reliance on the Democratic Party politicians who consistently betray the very migrant rights for which they claim to stand.

A united front of working-class organizations, human rights organizations, unions, and the Left can be built around a straightforward demand: For Open Borders! Let Them All In!