Nurses in Asheville, North Carolina won a big victory today: they voted to unionize, overwhelmingly, after many months of delay by the bosses and the government. It’s a victory for the entire working class, and particularly important in the South, where unionization levels are the lowest in the United States. 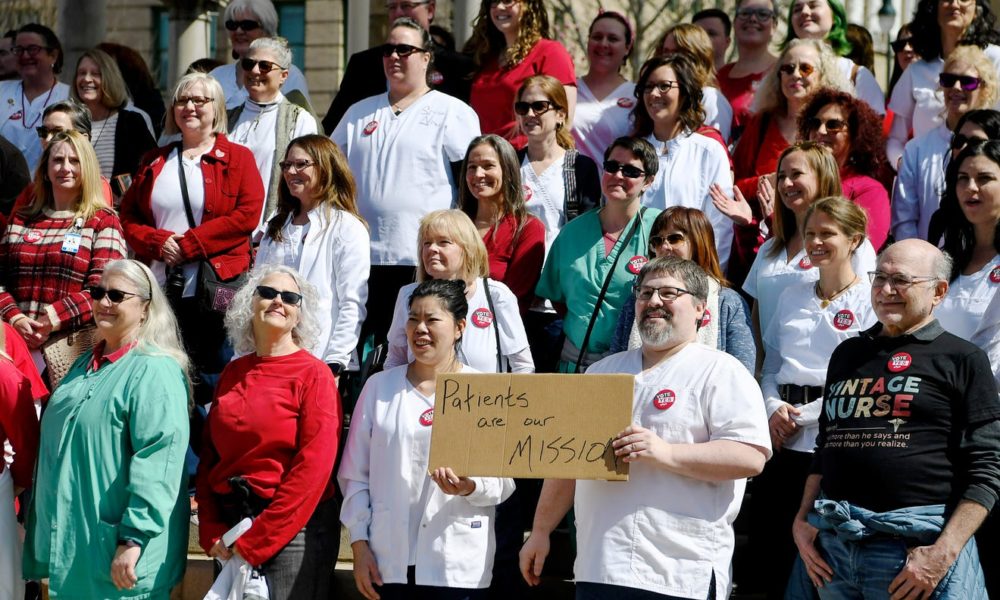 National Nurses United (NNU) — indeed, the entire labor movement — won a huge victory today in Asheville, North Carolina. Results of a union certification election were announced early this morning, and some 1,800 nurses at Mission Hospital will now be represented by the union. It comes at a moment of growing union combativity after decades of decline and complacency. And for healthcare workers fighting on the front lines against the coronavirus pandemic, it is especially significant.

Could this be an augur of things to come? Organizing the organized is of central importance in the fightback against the bosses, and especially in the midst of the deepening economic downturn that the capitalists aim to put on the backs of the working class.

Mission Hospital is owned by HCA Healthcare, the largest hospital corporation in the United States. It’s the company once run by Senator Rick Scott of Florida, who as CEO presided over the largest Medicare fraud in U.S. history — HCA pleaded guilty in 2000 and paid $1.7 billion in fines. More recently, HCA has been receiving money from the government — our money — in the form of nearly $1.5 billion in pandemic-related CARES Act grants, with much more likely to come.

Installing a nurses union in an HCA hospital is a big deal. Fewer than 40 of the company’s 184 hospitals have any unions at all. Unions don’t just benefit nurses but are also a boon to the healthcare system as a whole. In addition to helping secure and protect better wages, benefits, and working conditions for the nurses themselves, the existence of a nurses’ union  routinely leads to greater productivity, better training, less turnover, and nurses staying at the hospital longer — all of which benefit patients.1

HCA acquired Mission Hospital in February 2019 in a corporate takeover of what had been a community hospital. Nurses and the community noted a rapid decline in patient care conditions in the next few months, and the nurses began their drive for union representation. The hospital is the only acute care facility in the area.

HCA pulled out all the stops to keep the nurses’ union out. The company went above and beyond the usual hiring of $400-an-hour union-busting law firms and consultants to sway the vote through intimidation and other means — including meetings inside the hospital nurses were required to attend. HCA used the pandemic itself to undermine the union election. When nurses filed with the National Labor Relations Board (NLRB) in March, the company petitioned the NLRB to delay the vote because of coronavirus.

The Trump administration was complicit, having revised NLRB rules to make such “pandemic delays” petitions permissible from the bosses. Nurses had to wait months to vote instead of just a few weeks, and management took advantage of the extra time to up the efforts to squash the organizing effort. But in the end, it failed: Mission nurses voted overwhelmingly, 965 to 411, in favor of the union — a 70 percent landslide.

The importance of union breakthroughs in the South cannot be overstated. It is the least-unionized part of the United States — a legacy that exists for complex reasons that include so-called “right-to-work” laws that destroy the collective power of bargaining units when unions do win certification elections, along with the collusion of the church and state in the country’s most conservative region to paint unionization as somehow “anti-American” and “socialist.” South Carolina and North Carolina have the lowest unionization rates in the United States, at 2.2 and 2.3 percent of the workforce, respectively. By comparison, Hawaii and New York, the most unionized states, stand at 23.5 and 21.0 percent, respectively.2

Nurses at Mission, said the NNU, “endured months of delay before the election was held in a state with the second lowest unionization rate in the country. They confronted a regulatory climate hostile to unions and workers’ rights passed down by corporate interests and the Trump administration. They also faced the added challenge of conducting a huge union organizing campaign in the midst of the most dangerous pandemic in a century.”

The Mission Hospital nurses and their union persevered, at a critical moment for the labor movement and the working class as a whole. They are an example to all of us of the fighting spirit that needs to be imbued in the unions right now, to build a strong, independent, class-based fightback against the bosses.

Lesley Bruce, a Mission RN, put it well in the NNU press release. “We’re all thrilled that we’ve finally won. … This victory means we can use our collective voice to advocate for patient safety and safer staffing. I can’t wait to see what improvement we’ll win together.”