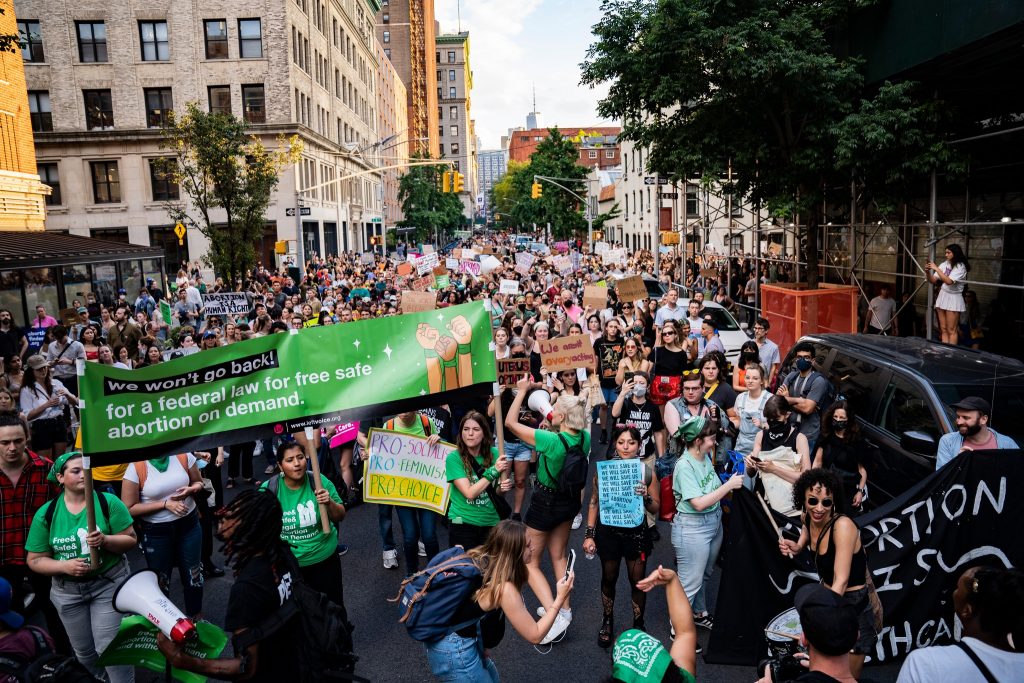 The day that nine unelected Supreme Court Justices — a gang of misogynists, religious fanatics, ultra right-wing racists, and the staunchest defenders of capital — decided to overturn the right to an abortion, tens of thousands in New York City flooded the streets to voice their rage.

Over 20,000 people gathered in Washington Square Park and marched to Times Square and Bryant Park, past Democratic Party officials’ offices, GOP offices, and St. Patrick’s Cathedral, chanting “not the Church, not the state, people must decide our fate.” Block after block of protesters brought traffic to a halt on both sides of the street on a busy Friday night in Manhattan. Truck drivers making their nightly deliveries honked horns in support and people leaned out of cars to raise a fist in solidarity as protesters marched through the lines of traffic.

The march, which took the streets without the “permission” of NYPD and the city, was marshaled by activists forged in the Black Lives Matter movement and other struggles. “We keep us safe!” the crowd chanted, knowing that the police do not. The march was dotted with green, an echo of the marea verde that won the right to an abortion in Argentina and decriminalized it in Colombia and Mexico and across Latin America. At least a dozen protesters were arrested by the NYPD as the march ended in Bryant Park, after staging a sit-in at one of New York City’s busiest intersections.

The protest was convened by Left Voice and other organizations as part of a coalition of socialist groups, activists, and unions — including several of the new Starbucks unions shaking up the labor movement across the country. The strong participation of workers’ organizations in this fight was a clear statement that we have a critical part to play in any movement for abortion rights; that the fight for reproductive justice and against all attacks by the state requires the organized response of labor — the workers who can grind the economy to a halt. In the wake of the leaked decision, this coalition decided that whatever day the decision dropped, we would take to the streets to defy the abortion ban now taking effect in many states the country and defend the universal right to an abortion.

The coalition organized around two principles: the need for safe, free, and legal abortion on demand, and the need to build an independent mass movement in the streets and in our workplaces to fight for that right — one that has no faith in the empty promises offered by the Democratic Party or any capitalist party to protect abortion rights. Unlike so many other abortion rights protests, no Democratic Party politicians spoke and no one pointed to elections as the solution.

The march began with a rally in Washington Square Park, where socialist groups, activists, and rank-and-file union members gave speeches to a packed crowd.

The resounding theme was a rallying cry to all those looking for next steps, who are not content to just wait until November like the Democrats tell us. People who know that this fight and the futures of hundreds of millions of people across the United States are in our hands. How do we build the movement we need to finally win the right to free, safe, and legal abortion on demand? Jimena Vergara, a UPS worker and member of Left Voice spoke on the need to organize in our workplaces and communities and unite the struggles of a new generation of union activists and all those who fight against exploitation and oppression:

The Democrats are not our friends in this fight. Our friends are the workers at Starbucks, at Apple, at Amazon, at Chipotle, at Traders Joe’s, who are fighting Jeff Bezos and other billionaires to unionize. Our friends in this fight are the Black, Latino, Palestinian, and immigrant communities all over New York and this country who are organizing in their neighbhorhoods for affordable housing, against police brutality, and so much more. We want a mass movement, independent of the Democratic Party made up of unions, workers, community organizations, students, feminists, and everyone who feels a sense of rage at this attack on our bodily autonomy. Just Imagine if we could strike for reproductive rights? Wouldn’t it be beautiful? Shouldn’t we make the slogan that we always chant real: if we don’t get it, shut it down!

As the march ended in Bryant Park, rank-and-file union members and activists returned to this theme, giving speeches about what comes next and how we can harness the power clearly demonstrated in this march to continue the struggle. Over a thousand people sitting in the park chanted: “Strike, Strike, for abortion rights.” This rallying call must be taken up across New York City and the United States by all workers organizations — from the largest unions to the combative new unions cropping up each day — and by all activist groups and community organizations to make it a reality. With that power, we can build a movement that can enshrine in law the right to free, legal, and safe abortion on demand.

The fact that the SCOTUS decision overturning Roe v. Wade came out despite the overwhelming support for abortion access across the country showed us that we can’t wait for the Democrats or the big non-profits to save us from the attacks of the Right. The tens of thousands of people who marched in New York City on Friday show that we don’t need to. We can fight for abortion rights and reproductive justice and so much more. Now it’s time to build that fight.

Join Bread and Roses, a new socialist feminist organization fighting to put an end to the exploitation and oppression of this sexist, racist, imperialist capitalist system.