On January 26 in New Delhi, thousands of farmers disrupted Modi’s Republic Day military parade and occupied the Red Fort to protest three laws that would hurt farmers and increase privatization and capitalist profits. 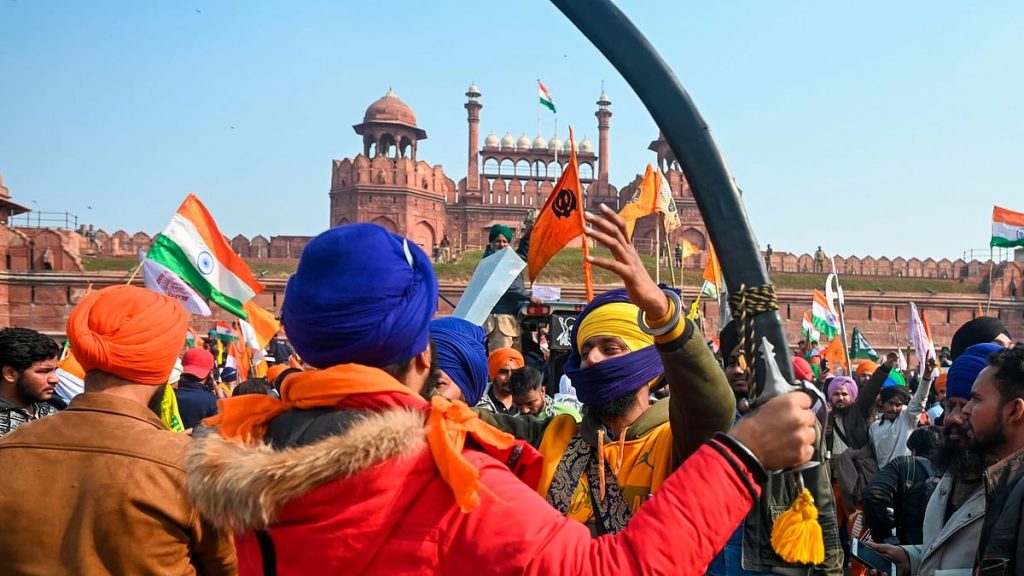 Though there have been headlines covering the farmers’ protests in India for the past couple of weeks, they gained even more traction after Rihanna and Greta Thunberg garnered backlash on Twitter from Indian public officials for raising awareness about the protests. On January 26 in New Delhi, thousands of protesting farmers used their tractors to pull apart barricades to disrupt Modi’s Republic Day military parade. More than 200,000 tractors arrived to protest, far above the 5,000 tractor cap allowed by the protest permit, with many young people coming in from neighboring states. Volunteers primarily from Haryana and Punjab provided food, water, and other supplies, and many student groups came to support protesting farmers as well. Many of these farmers had been camping out for months at the New Delhi border to protest the pro-corporate agricultural laws passed by the Bharatiya Janata Party (BJP)-led government.

Police tried to block roads with large trucks, buses, and shipping containers to try to stop the farmers; however, the protesters broke through, determined to reach the capital. They were met with police deploying tear gas and water cannons, carrying assault rifles, and brutally charging the crowds with batons. At the Ghazipur border between Delhi and Uttar Pradesh alone, police used tear gas and batons against approximately 2,000 protesters. Some of the most violent repression occurred around a former headquarters of the police force as protesters tried to break a final barrier to get to the city center. One hundred and twenty two people have been arrested, hundreds were maimed, and one protester, Navreet Singh Hundal, was killed by the police, although the police tried to dispute the evidence, claiming that he died when his tractor was overturned.

Protesters also occupied the historic Red Fort and flew a Nishan Sahib flag, the Sikh triangular flag flown outside of most Gurdwaras. The flag bears the khanda, a symbol of the Sikh faith. Many of the protesting farmers are Punjabi Sikh and have been historically oppressed by the Hindu nationalist state, of which the BJP is just one iteration.

In attempts to quell the actions, police have built concrete barricades, spread concertina wire, and hammered long metal spikes at the sites along Delhi’s outskirts. At the Singhu border where many protesters are camping, iron rods have been hooked between two rows of cement barriers on a part of the main highway, and a large number of police have been stationed there to restrict protesters’ movement, essentially trying to hold them hostage. In spite of the repression, protests are still happening on a nationwide scale, as well as internationally in solidarity with the farmers. At a press conference, farmers announced that they were planning a nationwide agitation and road blockage, also known as a chakka jam, on February 6 for three hours to protest not only the anti-farmer laws but also the Internet suspension, road barricades, and proposed budget that reduces the allocation to the agriculture sector.

What Are the Anti-Farmer Laws?

After Indian independence and the end of direct British colonization, a government-backed system of assured prices encouraged farmers in Punjab and Haryana that had larger plots of land to grow rice. Punjab and Haryana produce 50 percent of India’s surplus of rice and wheat despite comprising only three percent of its land area. Rice production in these states helped establish the Public Distribution System, a government food distribution program, taking surplus grain and distributing it at subsidized prices. The three laws passed by the Modi government in September 2020 allow farmers to sell their produce directly to private buyers instead of at the state-regulated marketplace, to enter into legal contracts with companies before planning their harvest, and to hoard grains until prices improve — all of which increase privatization and capitalist profits. The farmers are certain that if the new laws are implemented, smaller private traders will be replaced by larger corporations, drastically reducing their ability to negotiate fair prices for their products. Additionally, farmers have asserted that the new laws would make it easier for corporations to exploit agricultural workers and help big companies drive down prices, especially if there is a large supply in the market. After nine rounds of negotiations with the farmers’ unions, the right-wing Hindu nationalist BJP is trying to squash the protests by proffering an 18 month freeze on the proposed laws and some amendments; however, the farmers are resolute and are fighting for a complete repeal.

The Supreme Court formed a four-member committee of experts to listen to farmers and make recommendations to try to reach a “fair, equitable, and just solution to problems.” Agriculture is the primary source of income for 58 percent of India’s population, and farmers have been fighting for years to increase the minimum prices for their products. Farmers are a huge voting bloc, so the Court is trying to appease both corporations and farmers, despite their opposing financial interests. Especially in light of the farmers’ militancy and continued actions, the Supreme Court is trying to assuage fears with a suspension and encourage farmers’ unions to negotiate with them. However, farmers refuse to take the bait because they know that these suspensions will merely buy the ruling government time without making any real changes and neutralize the momentum that they have been building through the protests. Suspension would not offer any guarantees that the laws that stand to hurt their livelihoods would be repealed before they come into effect, and delaying the institution of the laws would be recast as a win for the movement despite not having anything to do with their actual demands.

In response to media coverage of the protests, the Delhi Police shut down internet access for Delhi residents, affecting 52 million mobile phone subscribers, ostensibly for “public safety.” Haryana also suspended mobile internet services in most of the state until February 1. Mobile shutdowns have been instituted frequently to disrupt protest movements such as during the CAA protests, and in the case of the Kashmir internet shutdown, which began in August 2019 and continues to this day, to silence entire populations. BJP-supporting social media influencers tried to falsely portray protesting farmers as Khalistani separatists, referring to a Sikh separatist movement in Punjab from the 70s and 80s, to depict them as enemies of the state. Television anchors on right-wing state-backed news channels furthered these false allegations, additionally accusing protesting farmers of being Pakistani spies, members of the opposition Congress party, and/or communists. The BJP government also reportedly sent a legal notice to Twitter that led to the blocking of several accounts linked to the farmers’ protest, demonstrating the extent of surveillance and censorship. Members of the Punjab Congress alleged that the BJP sent goons disguised as “locals” to attack farmers, and that journalists exposing this were also being targeted. At least eight Indian journalists and an opposition Congress member of parliament have been charged with sedition, criminal conspiracy, and promoting enmity for covering the protests. The police have also filed charges of rioting, attempted murder, and criminal conspiracy against at least 37 well-known farmers’ union leaders and activists, demonstrating the extent to which they are trying to crack down on protesters.

In contrast to the farmers’ militancy, Samyukt Kisan Morcha, the group of farm unions organizing the protests, condemned protesters’ violent tactics. A march on the parliament initially scheduled for February 1 was postponed in light of the events at the Republic Day protest. However, the farmers still are determined to repeal all of the three laws with whatever it takes, despite union misleadership. At the Landhri toll plaza on Hisar-Sirsa national highway, thousands of farmers vowed to “wage a long battle.” Farmers have blocked various highways to protest the internet suspensions in parts of the country. A well-organized network of volunteers from Haryana and Punjab have sent critical supplies such as rice, wheat flour, sugar, vegetables, blankets, clothes, etc. to protesters weekly. Community kitchens, makeshift medical camps, and even schools have been set up to support protesting farmers and their families. When asked how long the communities would continue to support striking farmers, volunteer Narmal Singh said that they were prepared until 2024.

The current protests by farmers have been one of the most powerful movements against the oppressive Modi-led BJP regime, and workers from across India and all over the globe have expressed their solidarity. Postponing the institution of laws that will ultimately help capitalists and hurt farmers who have already been struggling for decades is not a concession. To continue escalating pressure and win reforms, not only for farmers but also for other oppressed groups, it is imperative that other critical sectors of the working class such as electricity, railway, steel, construction, and healthcare workers ally with them. A worker and peasant-led indefinite general strike would bring the production and services that keep India running to a grinding halt, directly threatening the capitalists. Such a threat could pave the way to not only increased compensation for farmers but also more sustainable agricultural practices, resources to combat the coronavirus crisis, stimulus payments, and an end to state-led surveillance and repression of political dissidents and religious minorities.