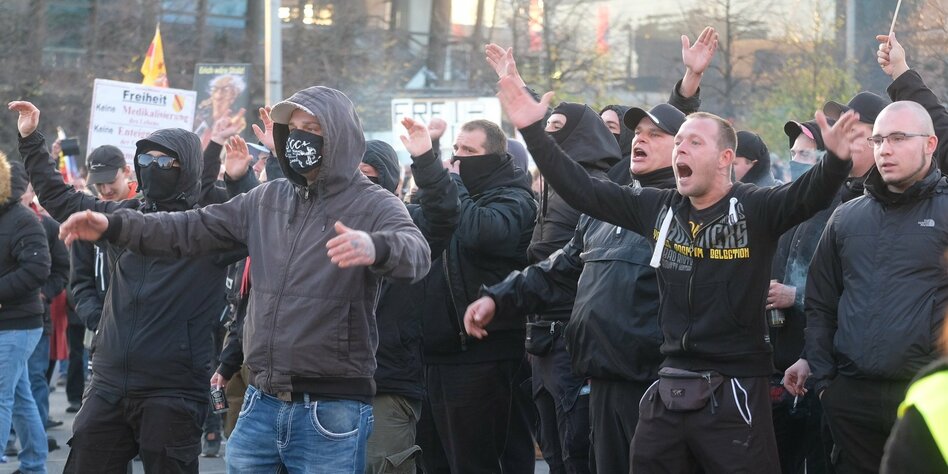 At the moment in Berlin, I am not allowed to meet two people from two other households outside for a walk. And radical measures are clearly needed: the city had 1,554 new infections yesterday.

But while most people live with serious restrictions, 30,000 opponents of masks and public health measures were allowed to gather in the Saxon city of Leipzig, just 150km to our south. Besides the usual mix of conspiracy theorists, esoteric “healers” and plenty of seniors worried about “the children,” there were more than 500 neo-nazis and hooligans. Udo Voigt, the former head of the neo-Nazi party NPD, was there, alongside well-known fascists from across the right-wing spectrum.

This demonstration of Querdenker, which can be translated either as “unconventional thinker” or “covidiots”, included fans of Donald Trump and the German Reich. The police counted at least 20,000 people at this potential superspreader event — an independent research group said it was more like 45,000.

The city had prohibited the demonstration at the Augustusplatz in the city centre, as there was no space for so many people to maintain social distancing, and told the organisers to go to the parking lot of the convention centre outside the city. But on Saturday morning, the Higher Administrative Court in Bautzen decided they could demonstrate downtown after all.

When the police announce a demonstration has been dissolved, there is usually about three seconds until they begin to attack people with batons and water cannons. But here, they held back.

And what happened? As thousands of people arrived at Augustusplatz, they had no masks and no distancing. By the early afternoon, the police declared that the demonstration was being dissolved for violating public health rules. And then… they did nothing.

As someone who has been to a thousand or so left-wing demonstrations, I have never seen anything like this. When the police announce a demonstration has been dissolved, there is usually about three seconds until they begin to attack people with batons and water cannons. But here, they held back. As the Leipzig police chief told ND:

We have to consider that our means are proportional, and the use of force was not appropriate for us here. We cannot fight a pandemic with police means, but only with the reason of the people.

After a few hours, the Nazis broke through the police lines and the whole demonstration moved onto the “ring,” the street around the old city. This was symbolically very important, as it was the location where the Monday demonstrations took place in 1989, marking the beginning of the end of the East German regime. Today’s Corona denialists see themselves as the heroes of a fight against a similar “health dictatorship” — a “DDR 2.0.” This was, as the taz called it, a triumph of the Corona denialists.

Police accompanied the illegal, infectious demonstration, but made no attempt to stop them. My union counted 38 incidents of impairing the work of journalists (including nine by police). They called it a “completely new dimension of violence.”

There were about 300 left-wing counter-demonstrators. When they returned to Connewitz, the city’s left-wing barrio, they were again attacked by police.

Now why would a court allow this? The Bautzen judges have not yet published their ruling. Critics noticed something in the Sächsische Verwaltungsblätter, whose editors include the judge Matthias Dehoust, who signed the ruling on Saturday. This publication wrote: “The disease COVID-19 is not much worse than the common flu.” The article added that “the probability of a fatal outcome is low” and that people who have the virus “likely suffer no serious long-term effects.”

So are Saxony’s judges not just reading, but actively spreading denialist ideas? I can’t stop helping to think about how Germany’s justice system after 1945 was built up by Nazi judges. And even by German standards, Saxon is considered a right-wing swamp.

That’s the only way I can think of the rulings one reads about. In Dresden, the other big Saxon city, a xenophobic Pegida demonstration took place on Monday. This was the anniversary of the pogroms on November 9, 1938 (the so-called “Night of the Broken Glass”). The city cancelled a memorial meeting due to the pandemic. But a right-wing demonstration was allowed to take place — even featuring Andreas Kalbitz, who was expelled from the right-wing party AfD because of his earlier connections to openly Nazi groups.

I know lots of Germans are looking at the United States and feeling smug about the 70 million people who voted for Donald Trump. The other side of the Atlantic might be a few steps ahead when it comes to the breakdown of bourgeois society, but the same forces are present here. And the police, who appear to be full of Nazis, are not stopping these tendencies. Instead, it’s opposite: they are helping them along.