350 at the Revolutionary Internationalist Summer Academy in Southern France

The European groups of the Trotskyist Fraction—Fourth International brought more than 350 people to France for the second Revolutionary Internationalist Summer Academy. In attendance were groups from France, the Spanish State, Germany, Italy, and other countries. They discussed the main events of the class struggle, political theory, strategy, and the challenges of the revolutionary left in Europe. 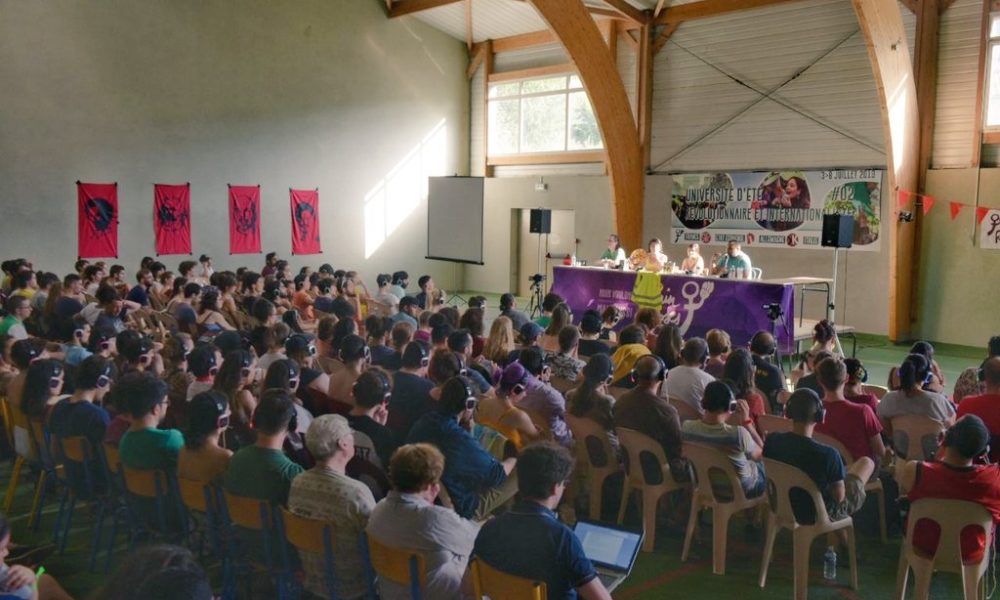 The second Internationalist Summer Academy was held from July 3 to 8 in France. The event was organized by Révolution Permanente from France, IzquierdaDiario.es from the Spanish State, Klasse Gegen Klasse from Germany and La Voce Della Lotte from Italy. These are all members of the international network that also includes Left Voice.

In an idyllic landscape in the south of France, dozens of workshops, panels and debates were held over the course of four days. They dealt with socialist feminism, the class struggle, the environmental crisis, the history of revolutions, the workers’ movement, Marxism, and socialist strategy. There was also time for assemblies of workers from different countries, meetings of the youth delegations, cultural activities, swimming in the river, sports, discussions and parties under the stars.

“It has been a great experience to discuss with so many comrades,” said a young woman from Madrid before making her way back. “I leave here even more convinced of joining this revolutionary project to transform society, which has only precarious jobs to offer to the majority of young people. As was said in several plenary meetings, we want to transform everything, because our lives are worth more than their profits.”

The class struggle was a major theme in all the debates, with moving stories and insights from many of its protagonists: From the yellow vests who shook France these last couple of months to the young Algerians who shared the lessons of the great mass uprisings in their country and Sudan. Also attending were the warriors from Onet, migrant workers who led a major strike in the train stations of Paris; a large delegation of “cheminots” (railroad workers) from France who carried out a historic strike; as well as precarious workers of Deliveroo and Telepizza from the Spanish State. They were joined by the “Kellys” who clean hotels in Barcelona, organizers of rank-and-file trade unions in Italy, and public transport workers and university employees from Germany. There were youth who took to the streets in massive demonstrations against climate change and hundreds of comrades from Pan y Rosas (Bread and Roses) who participate in the international women’s movement in different parts of Europe.

On the first day, several workshops were held that addressed the struggle against racism, patriarchy and capitalism; intersectional feminism; a socialist strategy to overthrow capitalism; Trotsky’s thinking; and the historical lessons on the Spanish revolution. Also discussed was the important experience of the Workers Left Front (FIT) and the Party of Socialist Workers (PTS) in Argentina.

In the afternoon there was a big meeting about the new wave of the international women’s movement. The panel included Verónica Landa from Pan y Rosas in Spain; Loli, a railway worker and militant of Du Pain et des Roses in France; Scilla from Il Pane e le Rose in Italy; Lily from Brot und Rosen in Germany; and Andrea D’Atri, founder of Pan y Rosas in Argentina.

On the second day, there were interesting workshops about the debate on feminism and prostitution, on Catalonia’s Independence and on the Cuban Revolution.

The central debate that day was about the experience of the yellow vests in France. Juan Chingo, author of the book “Gilets jaunes. Le soulèvement” (Yellow vests. The rebellion) and editor of Révolution Permanente, offered some conclusions on this important phenomenon, whose main feature is the disruptive intervention by peripheral sectors of the workers’ movement, with a new subjectivity and radical elements that haven’t been seen in decades. He pointed out the movement’s strengths and also its limitations, highlighting the responsibility of the trade union bureaucracies and the French left in sustaining the wall between the combative yellow vests and the organized workers’ movement. The lessons of these first battles made for a very lively discussion with the participation of dozens of yellow vests present at the Summer Academy.

On Saturday, we were able to enjoy a presentation by François Verges, a feminist intellectual from the former French colony of Réunion, who spoke about anti-colonial feminism. There were also workshops dedicated to left-wing populism, the European Union and the revolutionary program.

In the afternoon, two important meetings of workers and youth from the different countries were held.

Saturday’s highlight was the internationalist rally which concentrated the ideas that ran through the whole Academy.

Yunus, a young Turkish comrade, student leader in Germany, and militant of the Revolutionäre Internationalistische Organisation (RIO), opened the rally with a very powerful speech denouncing German imperialism and the idea of “green capitalism.” Giacomo Turci, from Italy’s Frazione Internazionalista Rivoluzionaria (FIR), attacked the homophobic, misogynistic and xenophobic policies of the extreme-right Salvini government, which at the same time maintains the economic policies of neoliberalism.

The Algerian militant Abdenour Maouche moved the audience with a description of the uprising of the Algerian people on the 57th anniversary of Algeria’s independence from French imperialism.

During the rally, there was also a touching but forceful speech by Imen, a friend of Zineb Redouane, who was killed by the police when a tear gas grenade hit her head during a yellow vest demonstration in Marseille. Imen read a letter written by Zineb’s daughter, greeting the rally and demanding Justice for Zineb.

The audience applauded a video message sent by two leaders of the Party of Socialist Workers (PTS) from Argentina: Nicolás del Caño, a member of congress and presidential candidate for the Workers Left Front (FIT), and Christian Castillo, who is running for governor in the province of Buenos Aires. In their message, they reaffirmed the need to build an international organization for socialist revolution.

Another important intervention came from Lucía Nistal, a member of the Revolutionary Workers Current (CRT) in the Spanish State, who called for the construction of a revolutionary left as a real alternative to reformist parties like Podemos and Syriza, which adapt themselves to capitalist regimes.

The rally concluded with a contribution by Daniela Cobet of the Revolutionary Communist Current (CCR) in the New Anticapitalist Party (NPA) of France, who discussed the political situation and the class struggle in France, emphasizing the need to build a big international revolutionary organization. “It is not only a question of fighting,” she said, “but also of preparing ourselves to triumph.” Cobet called on everyone present to join “this struggle for the revolution and for socialism, hand in hand with the working class.”

Saturday ended with a screening of a moving film about the Onet strikers made by the members of Révolution Permanente.

On Sunday there was time for workshops about a socialist program against climate change, precarious jobs and workplace illnesses, the debate about Feminism for the 99% and socialist feminism, and a lecture on the French Revolution.

An emotional closing plenary allowed for the exchange of first impressions and reflections on a great internationalist and revolutionary event. As the delegations began to prepare to return to their countries and cities, everyone celebrated the militant climate of enthusiasm, comradeship, and fraternization.

Another young woman from the Spanish State summed it up well: “I now understand that internationalism is a concrete experience. These days we all spoke different languages, but with one voice. We are united by the struggle for socialist revolution and for building an international revolutionary party. That’s why we can understand each other so well.”

First published in Spanish on IzquierdaDiario.es on July 8.