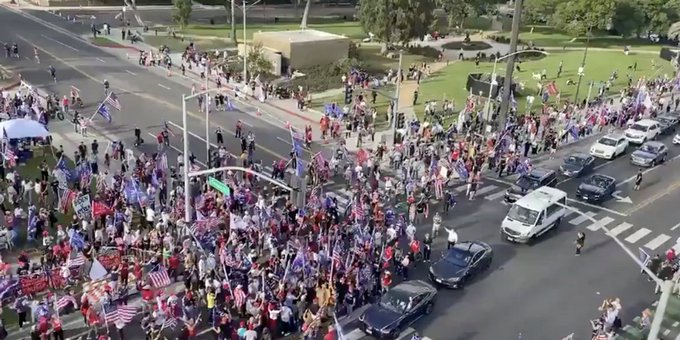 On Sunday, in Southern California, a caravan of Trump supporters attempted to intimidate voters going to the polls and even blocked their entry to the polling station. There were about 4,000 people in the caravan, which drove for 60 miles, bumper to bumper in a show of strength. It ended in front of a polling station.

“The supporters paraded for 60 miles through Riverside County on Sunday afternoon before gathering at the city’s (Ronald Reagan) Sports Park,” The Independent’s Stuti Mishra reports. “However, the crowd and their vehicles also ended up obstructing the access to the site, which included a voting center.”

The police were called, but upon arrival did not make any arrests. It’s hard to imagine a Black Lives Matter protest coming anywhere near a polling station without being violently suppressed by the cops. In fact, a group of voters led by a pastor, which had children as young as 5 in their ranks, was pepper sprayed by the police on Friday.

In the last few days before the election, Trump supporters across the United States have been attempting to show their strength while intimidating voters. This comes after a summer of confrontations between the massive Black Lives Matter movement and an armed fringe of right wing vigilantes.

Over the weekend, Trump rallies blocked traffic in multiple states, including a massive Trump caravan blocking traffic on the Garden State Parkway in New Jersey. Of course, the police protected these protests — a far cry from the repression experienced all summer by those defending Black lives.

This ultra-right wing cannot be defeated at the ballot box — after all, both Trump and Biden claim to want to increase police funding and protect “law and order.” We can, however, defeat them as we did in the Charlottesville protests— with our strength in the streets, drowning them out with our numbers. We can defeat an attempt by Trump to steal the elections by mobilizing the working class, by striking to make sure the votes are counted.

These ultra-reactionary protests are alarming, and they aren’t going to go away, no matter which racist capitalist wins the presidency. But there are more of us than them, and we are stronger if we organize.