40,000 People Flood the Streets of Paris in Solidarity with George Floyd

In Paris, tens of thousands of people participated in a demonstration in solidarity with George Floyd. Taking up the same slogans as protesters in the United States, demonstrators defied restrictions on large gatherings to denounce police brutality at the hands of the French state. This show of global unity sends protesters in the U.S. a clear message: they are not alone. 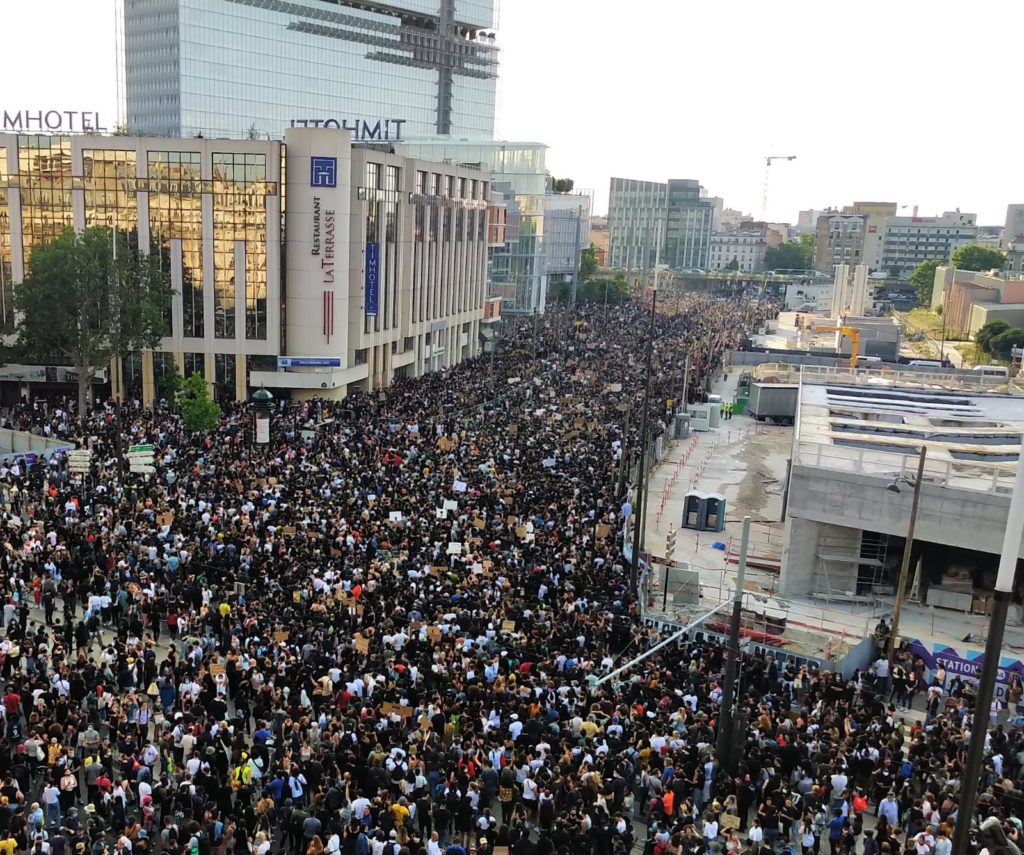 On June 2, more than 40,000 people flocked to a rally in Paris in solidarity with the anti-racist uprising taking place across the United States and to protest France’s own despicable record of racist police brutality. The demonstration defied a nationwide ban on protests and gatherings instituted by Emmanuel Macron’s government to stop the spread of coronavirus but that has been used to quell the dissent of France’s historic general strike earlier this year. As with the curfews declared in many U.S. cities, the French state is implementing severe repression to control opposition and repress protesters; however, protesters turned out in huge numbers to stand up against police brutality and France’s long history of racist and imperialist violence.

The demonstration was organized by the “Truth for Adama” collective, a group that demands justice for the death of a young Black man, Adama Traoré, who was murdered in police custody in 2016 on his 24th birthday. While the protest was called in solidarity with protests in the United States over the murder of George Floyd and other Black lives taken by the police, it took on greater significance in light of new evidence in the Traoré case that proves he was killed by beatings he received from police while in custody. For years, misleading medical reports have been used to exonerate the murderous police officers. The people in the streets this week demand the prosecution of Traoré’s killers, who have been protected by the state for too long.

But Tuesday’s protest — the largest since the country’s lockdown measures began — is also an outpouring of outrage in response to the police repression meted out daily against Black people and immigrants across France during the quarantine, especially those living in working-class neighborhoods who already face gutted healthcare services and high mortality rates from Covid-19. Just last month, protests broke out in a working-class neighborhood outside Paris against the police killing of a motorcyclist who was hit with a police vehicle. The police used the lockdown restrictions as justification for an intensely violent response in which they beat outnumbered protesters.

A post shared by Révolution Permanente (@revolutionpermanente.fr) on Jun 2, 2020 at 12:30pm PDT

Hours before the June 2 demonstration, the head of police in Paris reinforced the lockdown order, declaring the protest illegal and deploying riot police across the city. Despite this attempt to discourage the mobilization, tens of thousands of people gathered outside of Paris’s main courthouse to hear Traoré’s sister, Assa Traoré, who called for justice for George Floyd and her brother. Surrounded by fists raised in solidarity, Assa connected the struggles against racism in France and the United States.

Young people, activists, and contingents from France’s unions took to the streets in a display of international rage, highlighting for all the world to see that capitalism’s racism is global and that working and oppressed people will not tolerate racist injustice any longer. With young people of color at the frontlines, protesters held signs that echoed those of protesters in the United States.

“I want to breathe!”
“Our lives matter!”
“Racism suffocates us!”

Shortly after the rally began, as cop cars burned in the streets and marchers chanted “No justice, no peace!” French riot police descended on the protests in full force with tear gas and batons, making mass arrests. As police rushed the crowds to disperse them, several protesters reported they were tear gassed as they took refuge in a subway entrance.

The repression, however, could not stem the anger and determination of the demonstrators, who fought back against the police. As firefighters put out flames in one section of the city, protesters took a knee and raised their fists in solidarity with the anti-racist struggle around the world and against the history of racism that France’s “liberal” government tries to deny. As one demonstrator, Florian, told Révolution Permanente, “Our lives don’t count … crimes go unpunished. They shoot at us like rabbits. It’s been going on for too long.”

These events in Paris show that governments around the world will do whatever it takes to suppress the now global movement against police brutality and racism. Lockdowns and curfews instituted by the state are nothing but tools of repression to target protesters, especially people of color. But beyond this, the Paris demonstration shows that we are not alone. The amazing demonstration of French solidarity with the Black Lives Matter protests in the United States proves once again that the anti-racist struggle is international. Across the world, people are waking up to the fact that police violence is not an accumulation of individual incidents. It’s not a few bad cops. It’s a central pillar of an inherently racist system that stretches across the world — and from France to the United States, the whole thing has to go.