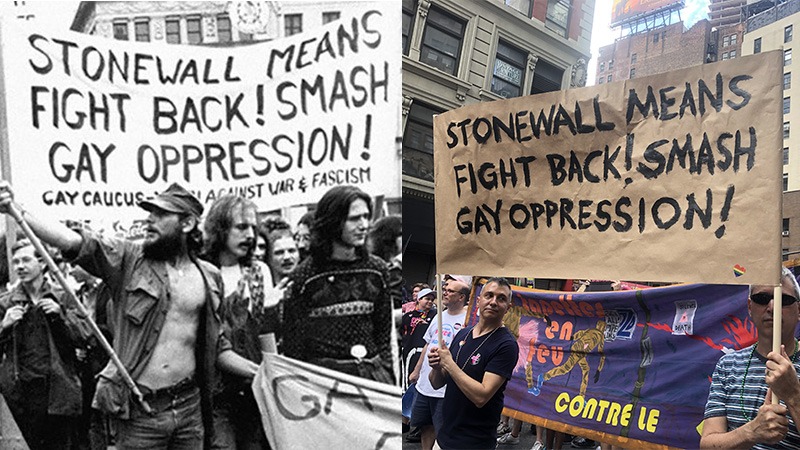 While the floats for the 2019 World Pride Parade were still being set up in midtown Manhattan, an estimated 8,000 people gathered around the Stonewall National Monument to participate in the Queer Liberation March, organized by the Reclaim Pride Coalition. The World Pride Parade includes floats by the most heinous and exploitative corporations painted in rainbow flags. The Queer Liberation March is clearly different: no cops, no corporations, just the fight for queer liberation. The initial marchers stepped off at 9:30am, later stopping at Bryant Park at 11:00am for a moment of silence and picking up marchers who could not attend the early start time. It is estimated that a total of 45,000 people participated. 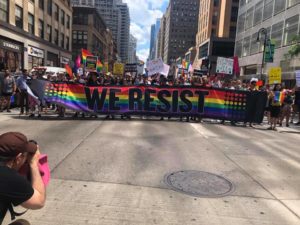 According to the Reclaim Pride Coalition’s website, “The Queer Liberation March is a people’s political march—no corporate floats, and no police in our march…We honor the powerful legacy of the Stonewall Rebellion by highlighting the most marginalized members of our community, as we commit to addressing the ongoing struggles that we face.” It is a celebration, but also a protest.

This was a fitting year for the queer liberation march, as it marks the 50th anniversary of the Stonewall Uprising. A constant theme in signs and in chants during the march was “Queers don’t deny it, Stonewall was a riot.”

As one marcher declared, “This march fights against the appropriation of what Pride and what Stonewall stands for.  Stonewall was a riot, let by queer people of color, led by trans women of color. Our liberation won’t have corporate sponsors or police escorts, it will be a fight against cops and corporations.” 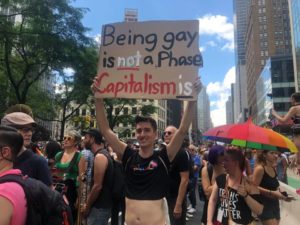 The marchers carried signs criticizing imperialism, the police, transphobia, racism, ICE, and capitalism. Many carried signs in support of specific people like Chelsea Manning and the several Black trans women who have been murdered this year, as well as the women who died in ICE custody. Protesters chanted against Trump, as well as against the racist NYPD and called for the abolition of ICE. Others waved Palestinian flags.  Many carried signs and banners against the prison industrial complex, highlighting the death of Layleen Polanco, a trans woman who died in solitary confinement at Rikers Island in June. Act Up NY performed a die in to highlight the 17 HIV positive people who have died in ICE detention centers due to neglect and lack of medical care.

The very structure of the Queer Liberation March and how it differed from the World Pride Parade demonstrates the capitalist corruption of the Pride parade. People who chose to attend World Pride found space along the sidewalks from which to stand and watch the parade go by. They were separated from the floats and celebrities by police barricades and police themselves. In order to participate in the parade, prospective participants had to register months in advance as part of an organization’s a 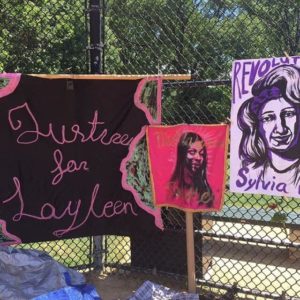 At the Queer Liberation March, anyone could join the march at any time, or step away at any time if they needed to rest, hydrate, eat or take a break. There was no registration fee or any rules beyond what was allowed within the march’s permits, safety recommendations and the general guidance of the event’s mission statement. Everyone was free to express themselves in the way that they chose. There were no barriers to participation—as it should be.

A few days before the march Reclaim Pride organizer Colin Ashley said, “The biggest problem [with World Pride] is an overall pinkwashing that produces cultural amnesia…The official Pride parade erases our own history of fighting back and it teaches people that their oppressors, like the cops and the corporations, are their friends.”

Without a doubt, the Queer Liberation march was a strong and bold statement, 45,000 people strong, that marches to reclaim the radical roots of the queer movement. 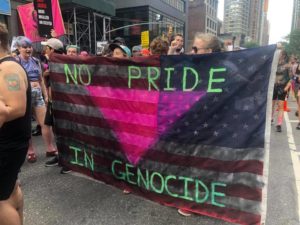