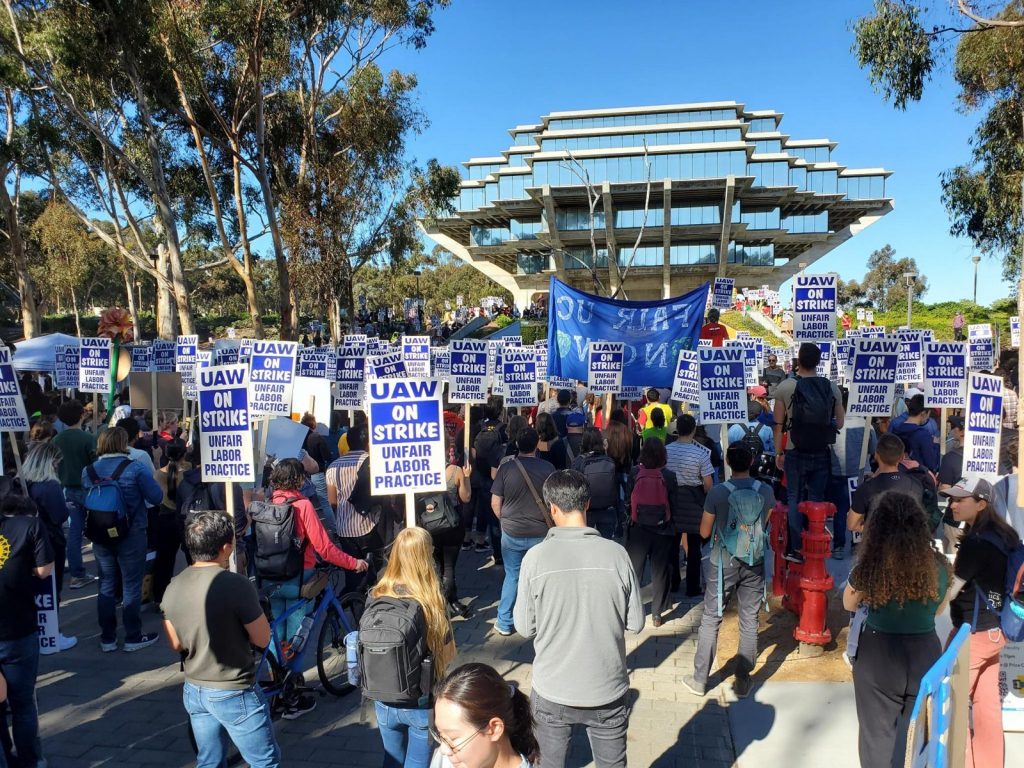 On Monday morning, 48,000 education workers, graduate students, postdocs, academic researchers, and teaching assistants represented by the UAW across the University of California system went on strike. This comes after over a year of failed negotiations during which the UAW filed almost 30 unfair labor practice complaints against the University. This historic strike is both the first time postdocs have gone on strike in U.S. history and the biggest strike in California in 10 years. Workers are in a strong position with large turnout across campuses. The strike has been further strengthened by a solidarity strike sanction for Teamsters-organized to UC campuses, and permission for construction workers to not cross picket lines for developments on campus.

At the UC San Diego campus, hundreds of workers joined the picket lines where the energy was forceful and defiant. The UC administration had attempted to negotiate until the 11th hour to prevent the strike, but their offers didn’t match worker demands. Academic workers in the UC system are fighting for a fair contract, with broad demands anchored by pay increases that account for inflation.

Across the state, 90 percent of graduate workers and over 60 percent of postdocs are rent burdened. Last year, UCSD increased rents in student housing by up to 85 percent, meaning some students put as much as 75 percent of their income toward housing. Additionally, in a state with very little public transit — and as tackling climate change becomes more urgent — access to reliable transportation and greater investment in cycling infrastructure is a central demand for the union. The union is also demanding longer minimum appointment durations for workers such as postdocs and academic researchers who are often kept in precarious employment and unable to push back against abusive labor practices due to these short contracts.

These dire conditions for education workers and the unwillingness of UC to pay them is a result of neoliberal austerity policies which cut funding for education and forced the universities to rely on tuition and private investment. In fact, public funding for universities is at a historic low. Thus, striking for better material conditions is important but without structural change, workers will eventually find themselves squeezed again. As the fighting spirit of labor builds across the country, demands must expand beyond economic demands to political change.

UC workers are not alone in their fight for better living conditions. With strike authorizations at Temple University, The New School, and negotiations brewing at University of Michigan, eyes are on the UC strike. What happens here will set a precedent for campus worker struggles across the country.