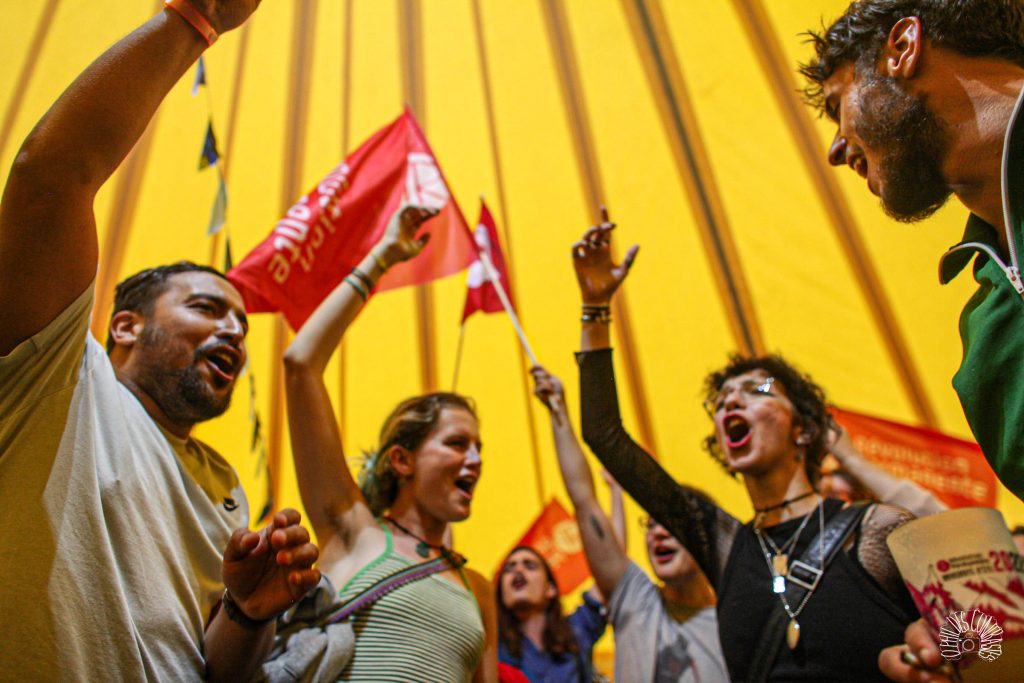 With Mont Blanc, the highest peak in Western Europe, towering in the background, almost 500 people gathered in the foothills of the French Alps for the Summer University of Révolution Permanente. The sister site of Left Voice in France is in the process of building a new revolutionary organization in France. This event was an opportunity to discuss the tasks of revolutionaries in a new period of crises, wars, and revolutions.

From August 24-29, discussions and debates took place from morning until night under a big circus tent. Workers from some of the most important struggles of recent years in France — including from the aerospace industry, public transport, hospitals, cleaning services, and oil refineries — were at the camp to discuss their experiences. The Summer University opened with a panel discussion on the new generation of workers confronting the neoliberal attacks of French president Emmanuel Macron. Workshops served to connect these struggles with the anti-racist or LGTQI+ movements.

Delegations from Germany, Italy, the Spanish State, Switzerland, Argentina, and Korea joined the event. There were even more people on a waiting list, but with an ongoing drought in France, the small mountain town could not accommodate all those who wished to take part.

Just over a year ago, supporters of Révolution Permanente were excluded from the New Anticapitalist Party (NPA), where they had been members for more than a decade. But far from being demoralized, they declared their intention to found a new revolutionary organization. As part of this process, they ran the Trotskyist railway worker Anasse Kazib for president. While Kazib was ultimately kept off the ballot via undemocratic rules, the campaign helped give a voice to new generations of workers and activists, and thus laid the groundwork for a revival of the far Left. As Kazib said at the camp: “It is about hope. With the presidential campaign, we showed that it is possible to organize collectively and to achieve a world free of exploitation and oppression — a world that is worth fighting for.”

Much of France’s once powerful far Left has aligned itself with the social chauvinist politician Jean-Luc Melénchon, whose aim is to reform the French imperialist state. But the Révolution Permanente summer camp showed that there is an alternative to reformism: millions of workers and young people in France are looking for an alternative to the rotten Fifth Republic. This event was a small step in the process of gathering forces for a new revolutionary organization, one that can combine the energies of new generations of workers with those of immigrants and queer people fighting against oppression.

This was not the only summer camp organized by the European groups that make up the Trotskyist Fraction this summer. In early August, 120 people attended the summer camp of Klasse Gegen Klasse, our sister site in Germany (see this report in German). In July, IzquierdaDiario.es in the Spanish State held two summer schools: one in Madrid with 80 people (report in Spanish) and another in Barcelona with 60 people (report in Catalán).