Over 55,000 Los Angeles County workers, the membership of SEIU Local 721, have voted to strike. But this is just the beginning. Workers must make ambitious demands and continue to withhold their labor to keep the people of LA County safe. The labor movement must support and defend a strike. 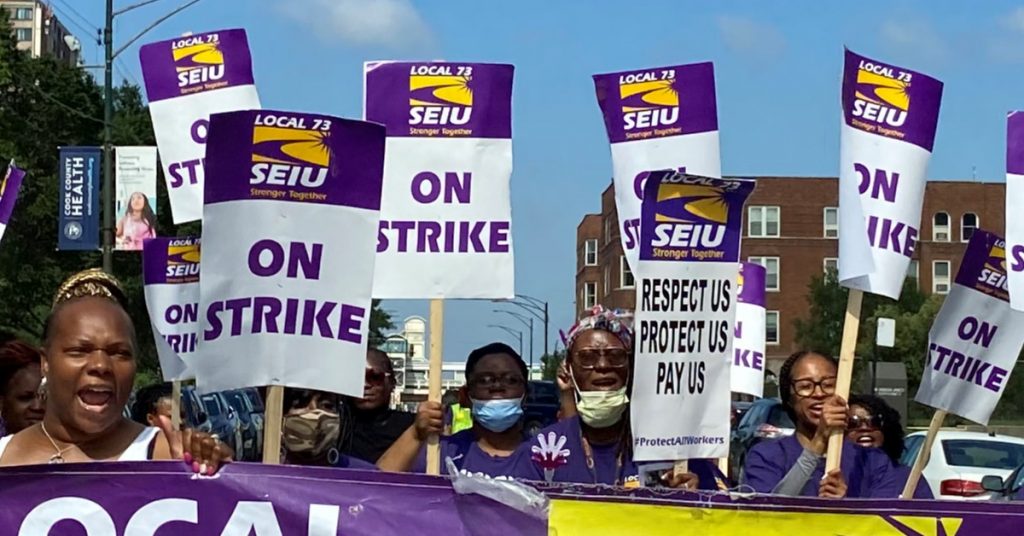 Over 55,000 workers in Los Angeles County, the membership of SEIU Local 721, have just voted to strike, with 98 percent voting “yes.” This comes on the heels of tense negotiations with the county Board of Supervisors, which is insisting that raises far below inflation and an extremely understaffed workforce are acceptable for the public services of some of the most underserved areas of LA County. But the strike authorization is just the beginning. Workers must make ambitious demands and continue to use their power to withhold their labor if the Board of Supervisors does not give them what is needed to keep the people of LA County safe.

The membership of SEIU Local 721 is made up of mental health workers, social service providers, and nurses — some of the workers who have been most exploited and seen the worst effects of the Covid-19 pandemic, which exacerbated the already dehumanizing conditions caused by capitalism. However, despite the declarations of gratitude from the LA area municipal governments, the offer from the county was a meager raise and not even a promise for adequate staffing or an end to outsourcing.

Tense negotiations have been ongoing, with SEIU leadership calling for a strike vote, which has now been approved. While the county originally offered raises of 2 percent, even the threat of a strike has increased this demand to 3.5 percent. Despite today’s successful vote, it remains to be seen whether union members will actually strike. Nonetheless, this is the first step towards shutting down the county’s public service sector until the demands — for an end to what are effectively lower salaries, continued and dangerous levels of understaffing, and the routine outsourcing of previously union jobs to private contractors — are met.

The Board of Supervisors of LA County has already passed a resolution to “avoid disruption of critical services in the event of a strike,” and are authorizing themselves to hire scabs — privately contracted workers used to undermine unions and prevent the effectiveness of a strike — and their resolution specifically states that the Board of Supervisors will not be bound by any contract and will be able to waive all other current requirements. The resolution asserts that, “DHS [Department of Health Services] provides a wide array of essential services to some of the County’s most vulnerable residents, and the County must be prepared to continue to provide essential services to these patients and clients in order to minimize … the adverse impact that a strike by SEIU members would have upon these residents.” Where was this concern for the most vulnerable people of LA when a skeleton crew of workers were enduring the worst conditions of the pandemic?

This is, quite simply, a bizarre take on the role of the DHS. Who is actually offering the “essential services”? Who is demanding increased staffing in order to truly serve the most vulnerable communities of Los Angeles County? Not DHS administration, but SEIU members! It hasn’t bothered DHS that there’s been a veritable skeleton crew working to maintain the health and safety of residents. It hasn’t bothered DHS that they ignored staff time and time again when they demanded more hiring to provide better care to those who need it. But now that workers are considering a strike, the Board of Supervisors is suddenly concerned about understaffing? Workers need to be bold and brave as they go into strike preparation. The success of this fight will have a huge impact on the labor movement. Ready to fight, ready to strike!

These are the SEIU demands all workers should support:

With inflation at 8.5 percent, anything less than that is effectively a pay decrease. The 3-percent increase that the county is offering is unacceptably low, especially when they are doing the work of multiple positions. SEIU members must be offered a contract with raises of at least 9 to 10 percent to meet inflation and still be a raise.

Due to the “Great Resignation” during and after the pandemic, workers are leaving public service in droves. LA County workers have also lost their lives fighting the pandemic on the frontline. Many SEIU workers simply couldn’t withstand the constant influx of needless deaths of some of the most vulnerable residents of the county—nor should any have had to. Finding the bodies of their patients in outdoor tents, or patient passing away at the hospital was simply too much to bear. As a result, the health and social services of the county have been left dangerously understaffed and each of the remaining workers cannot magically provide the necessary services normally provided by sometimes as many as twelve people. The county must offer enough pay to fill these positions with union jobs and make extensive budget changes to further help the patients and other vulnerable communities served by SEIU.

The union is also demanding an end to the outsourcing of these jobs to non-union contractors, a practice designed to have free reign over the exploitation of an unorganized workforce.

Management has asked SEIU 721 to “exempt” some workers from the strike, keeping some members working to provide a minimal level of services to the community. This is management that is trying to manipulate workers into feeling too guilty to strike as well as attempting to get SEIU to allow scabs to replace workers. Signing any type of agreement like this would remove the actual effectiveness of a strike, which is based entirely around workers withholding their labor in order to force an improvement in their wages, working conditions, and the health and safety of their patients and clients. Without a unified workforce, without a true strike that shuts down offices, a strike will be simply ceremonial and will not result in real concessions from the Board of Supervisors.

History shows us strike exemptions don’t work. In 2021, when the California Nurses Association went on strike in San Joaquin County, the county government filed for an injunction to force the workers to return. In response, the CNA “exempted from the strike 38 nurses plus two alternates and one on-call nurse, and the County withdrew its charge and request for injunctive relief.” But after the strike, the county engaged in a lockout of the workers and docked their pay for days they hadn’t even been out on strike. The best way to care for patients is to have a well-staffed, higher-paid, unionized workforce.

While the Republican Party has been brazenly anti-union in rhetoric and actions, municipal governments run by Democratic Party politicians will clearly stoop to any level to try to intimidate workers out of fighting for their rights. Democratic Supervisor Holly Mitchell authored this stab in the back with no pushback from any other supervisors. Our dues money should not fund politicians of either party. We need a party of the workers, controlled by the workers.

Strikes cannot win by capitulating to the intimidation that is routed through anti-strike legislation or court orders. Workers cannot allow the same institutions that create exploitative working conditions to gaslight them into weakening their own power. Successful strikes and working-class mobilizations require strikes of all workers, even in the face of injunctions and anti-strike laws. The capitalists and their political parties cannot legislate away our rights to fight for our lives and the people we help.

Even before the votes had been counted, management began to retaliate against union workers. SEIU 721 will defend its members against retaliation, but we need the rest of the labor movement to back us up as well. Workers must stand in solidarity with each other in order to win. Any strike by SEIU Local 721 members must include outreach to other unions, especially other unions in Los Angeles County and directly to rank-and-file members, encouraging them to strike in solidarity with workers. A strike of this magnitude would bring the county government to its knees and force them to not only give into the demands of the SEIU, but to recognize the rights of other unions to higher salaries and better working conditions.

Union members across the country are routinely kept from participating in contract negotiations, and only members of union leadership are allowed to decide what demands make it to the table. This leaves workers waiting for a contract that may be not at all what they want, but they often are pressured by union leaderships to ratify these contracts rather than strike. If the demands being made in contract negotiations were open to the rank and file members, they could support the bargaining committee and pressure management to respect our union. Rank-and-file union members should be part of these negotiations from the start and not handed down bad contracts from leadership, who then pressure members to quickly ratify them.

The union needs rank-and-file strike committees at every worksite with SEIU members. These committees must be made up of workers who are on the ground and in the trenches. They are the ones who know how to shut down the services that keep the county running. This campaign must be bold. A strike would be an example to the entire labor movement. SEIU 721 members should join picket captain training and prepare to defend the union!

The document that was leaked from the Supreme Court this week was an outrageous attack on reproductive rights, and more attacks are certain to follow. The healthcare workforce is disproportionally made up of women, and the right to an abortion is crucial for the entire working class, the poor, and the unhoused. The wholesale national removal of a right is unprecedented in this country’s history, and it’s important that all workers fight back!

Left Voice supports an SEIU 721 strike and is in solidarity with the workers. We call on the rest of the labor movement to show solidarity and support the strike.