62 Years after the Revolution: What Are the Perspectives for Cuba?

January 1 was the 62nd anniversary of the Cuban Revolution. The government of Cuban president Miguel Díaz-Canel is celebrating with austerity and economic opening. This is opening lots of debates about perspectives. 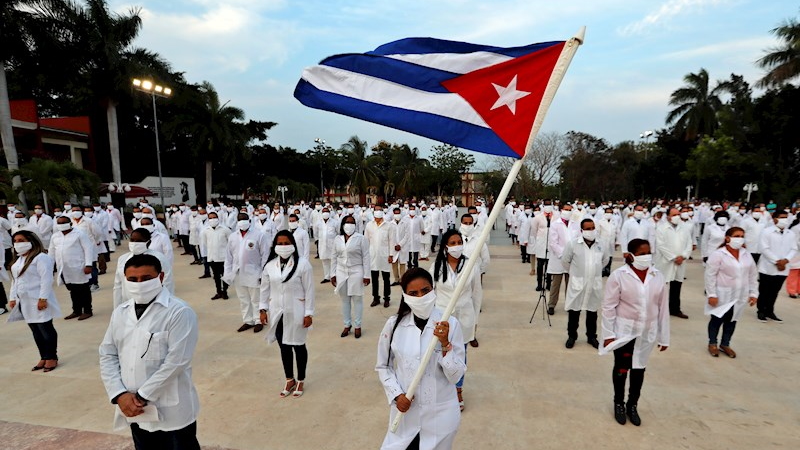 January 1 was another anniversary of the 1959 revolution — the first socialist revolution in Latin America. Sixty-two years after those great historical events, Cuba is entering a new stage. In the midst of the economic crisis unleashed by the pandemic, which reduced tourism levels by half, and the economic blockade tightened by President Trump since he took office in 2017, the government of Cuban president Miguel Díaz-Canel announced a series of economic measures in early December that open up a new period for the country.

There are two central characteristics of this new period: on the one hand, there is severe austerity for the working masses, in the form of inflation and cuts in “undue subsidies and free services,” as the government cynically calls them. These measures will probably increase unemployment. On the other hand, there is a new battery of measures to “attract foreign investment” and strengthen the so-called private sector, the small and medium-sized merchants and businesspeople who employ nor more than a few dozen people.

The “Ordering Task” is the most important economic plan to be launched since Díaz-Canel assumed office in 2018. Taken as a whole, and as part of the pro-market reforms initiated by Raúl Castro in 2010–11, it is a further step toward capitalist restoration. If completed, this restoration will be a severe defeat not only for the heroic Cuban working class, which resisted decades of imperialist intimidation, but also for the leadership of the bureaucracy. It would be a blow for the working class and all the poor masses across Latin America, and even beyond.

Capitalist restoration would entail the loss of historic gains like the nationalized economy with its centralized planning, which — despite the blockade and bureaucratic mismanagement — allowed enormous social achievements, such as the liquidation of illiteracy and hunger and the guarantee of full employment, free and universal health care, and high-quality education. Capitalist restoration would be a triumph for imperialism and the ruling classes of the entire continent.

You might be interested in: “In Cuba we needed Trotsky to understand what happened in the Soviet Union” — Interview with Frank García

In this critical framework, old and new debates about the perspectives for Cuba have reopened. What is possible, and what is necessary? There are a wide range of positions. This goes from openly reactionary ones that call for a more or less violent “regime change” — such proposals have been marginal for years, though they were partially revived in the Trump era. It includes liberal positions that are very widespread and call for continuing the reforms while accepting the bureaucracy as a valid interlocutor. This line was, in general, the one pursued by Barack Obama during his presidency (2009–17), under the auspices of the Vatican and Pope Francis. This policy seeks to build bridges with the top bureaucracy of the Communist Party of Cuba (PCC), whose strategy aims at capitalist restoration (under the euphemism of “updating Cuban socialism”) in the style of China or Vietnam.

As part of this strategy, the Catholic Church — counterrevolutionary organization par excellence — and other churches have enjoyed complete freedom to organize, publish, and spread their ideas in Cuba for years. They even have several seats in the National Assembly. This was seen especially in 2018, when all the congregations carried out a massive campaign against the inclusion of the elementary democratic right to marriage equality in the new constitution. That was eventually postponed and is set to be put to a referendum in mid-2021.

You might be interested in: The New Cuban Constitution Incorporates Private Property and Recognizes the Role of the “Market”

There are already countless positions on the Left, both inside and outside Cuba. Many are still confident that the one-party regime can reform itself, getting rid of authoritarianism, bureaucratism, and “other evils.” It could then open a discussion with the politically active population about how to resolve the crisis. This vision is based on defending the revolution and its gains, but at the same time defending the reactionary political regime.

This school of thought fails to see that the one-party regime is part of the problem. Imperialism and its puppets throughout the continent are not the only enemies of the revolution. Prohibiting the organization, deliberation, and publication of ideas by all people who defend the revolution — which today is only allowed for the PCC and the mass organizations it controls — is itself a threat to the revolution. Implementing austerity for the big majority while reaping benefits from foreign investment and maintaining the privileges of the bureaucracy is a threat to the revolution. Weakening the nationalized economy and the monopoly of foreign trade, and introducing more and more market mechanisms, threaten the revolution. Relying on liberal sectors and tendencies that aim to restore capitalism, as Raúl Castro did during the Obama administration, instead of relying on the working and poor masses, supporting and developing their struggles throughout the continent, also threatens the revolution.

It is not just a question of individual bureaucrats who are corrupt and authoritarian, and want to enrich themselves. It is a political regime that is undermining the foundations of the workers’ state. This is similar to what happened to the great October Revolution, as the regime established by Stalin began a policy of “peaceful coexistence” with imperialism and the construction of “socialism in a single country” (or a bloc of countries after the Second World War). The great Russian revolutionary Leon Trotsky, who until his assassination in 1940 fought the bureaucratization of the Soviet state, defended the program of political revolution that would return power to the working class and its soviets, as the only way to avoid capitalist restoration.

A defense of the revolution that places its hopes in the self-reform of the regime, attempting to thus correct its most reactionary aspects, is ultimately powerless because it maintains the essential aspect of the one-party regime: the control of the masses and the containment of the international revolution.

That is why we emphasize the need, today more than ever, of defending the gains of the revolution — primarily in confrontation with imperialism, but inevitably also with the PCC bureaucracy, which is entrenched in the state. For decades, that bureaucracy has been forcing the masses to pay for the crises, scrupulously maintaining its privileges, associating itself with foreign capital, and systematically degrading the nationalized economy, planning, the monopoly of foreign trade, and other social gains.

We uphold the need for a political revolution that will put an end to the one-party regime and install a government of the workers and peasants, based on self-organization and self-determination. This new regime would include broad workers’ democracy and freedom of organization for all people who defend the revolution. It would permit a revision of all the pro-market reforms and discussion about the economic and social measures necessary to solve Cuba’s crisis — a solution in the interests of the big majority, and not of the bureaucratic elite, the foreign companies, or the new well-to-do sectors. Moreover, such steps would be a huge boost to the massive struggles that have swept the continent in the last two years, including the Chilean rebellion, the struggle against the coup in Bolivia, the massive mobilizations against racism and repression in the U.S., and the struggle in Colombia and Peru against austerity and corruption.

In this way, it would be possible to halt the current restorationist course; to revitalize the great revolutionary process that began in 1959 and culminated in a socialist revolution; and to return to the place in the vanguard of the anti-capitalist and anti-imperialist struggle of the exploited masses of Latin America.

First published in Spanish on January 1 in La Izquierda Diario.