7 Reasons To Mobilize On Inauguration Weekend

January 20, the day of Trump’s inauguration will also be a day of mass protests against Trump and the racism and misogyny he represents. The following are seven reasons to take the streets on January 20! 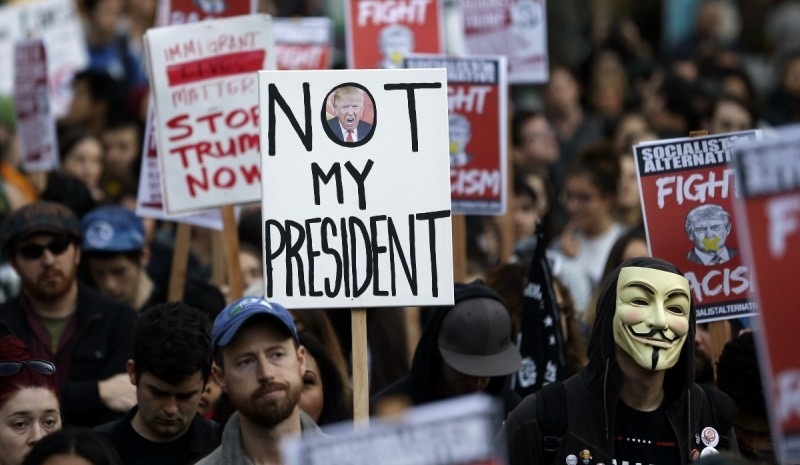 Donald Trump’s impervious arrogance shows he’s determined to go hard on human rights, women’s rights and workers’ long-standing conquests. We need to stop him. His hate rhetoric against immigrants and Muslims must be met with bold, immediate resistance. The only way to put a limit to his reactionary program is by mobilizing massively, disrupting the inauguration, shutting down all major cities and letting our voices be heard across the country.

2. START BUILDING UP THE RESISTANCE FOR THE COMING MONTHS

This weekend we “inaugurate the resistance” against Trump. The many protests scheduled for January 20 and the Women’s March on Washington on Saturday 21 will be the first test of strength for those of us who organize on a daily basis against police brutality, racial oppression, sexism and capitalist exploitation.

A convulsive period is coming and we better get started with the arduous task of building fighting organizations at our workplaces, schools and communities. The bankruptcy of the Democratic Party and the absence of any viable anti-capitalist opposition these elections show that the road to human liberation is not through the ballot box. Moreover, the Democrats are focused on fighting gerrymandering, mourning Obama and engaging in useless Congressional disputes, instead of building the resistance we need.

The protests in DC this weekend are the first opportunity to start building a network for collective action and solidarity. Working class organizations need to come together in a united front against the attacks that are sure to come.

3. STAND UP AGAINST SEXISM

If millions of Americans were all to ready to overlook or condone Trump’s unrepentant sexism, WE WON’T. His remarks and the policies he seeks to impose (such as filling the Supreme Court with pro-life judges) are an enticement for male chauvinists and a threat to all women. But he won’t have it easy. The Women’s March on Washington will be a historic event that you don’t want to miss. Hundreds of thousands are expected to take the streets in Washington DC and elsewhere in a collective war-cry: our bodies, our choice; equal pay for equal work; LGBTQ rights; stop violence against women in all its forms.

4. FIGHT BACK RACISM AND BIGOTRY

Since election day, we’ve seen a wave of hate crimes and other demonstrations of bigotry by Trump supporters across the country. The unfettered “Alt-right” trolling in social media takes a real-world form in the neonazi mob-like street attacks on Muslim, immigrants and gender nonconforming people. White nationalist organizations with tight links and endorsements to the new administration have also emboldened violent attacks against African-Americans including valorization of police brutality and an uptick in hate crimes that specifically include threats of lynching.

But in the wake of unapologetic state-sponsored violence?, the widespread protests against racist police killings has shown the potential in mobilizing and disrupting.

There is no middle ground here: the only way to push Trump supporters back into their niches/caves is by outnumbering them in the streets.

Donald Trump, Paul Ryan and the whole GOP are trying to not only gut Obamacare, but also privatize Medicaid and Medicare. Obamacare was a great deal for insurance companies and had only a few progressive features, such as the expansion of Medicaid. Although they are eager to “repeal Obamacare”, it is still unclear how Republicans could get rid of the provisions that are unpopular, such as the individual mandate, without undermining the profits of the health industry. More worrisome, however, is Tom Price and Seema Verma’s vision for Medicaid and Medicare. Over 100 thousand people are partially or fully covered by these programs, and their access to health care will now be in jeopardy. This is the opportunity to advance the demand of “free universal healthcare” for all citizens and undocumented people residing in the US.

With the new distribution of seats in Congress and Trump’s Supreme Court pick to replace the late Justice Scalia, right-to-work laws will likely gain the upper hand in many states and on a federal level.

Democrats and Republicans alike, in collusion with the mainstream media bought into the “Russian Hack” story, expressing outrage for a foreign government’s intervention in US politics. However, the U.S. has toppled governments around the world throughout the second half of the 20th century and still holds more than 800 military bases abroad.

Despite Obama’s pledge to end the wars he inherited, he continued them through his eight year term with a staggering 1 U.S. bomb dropped every 20 minutes. By ushering in the era of deadly drone attacks, Obama now leaves tremendous leeway to the Trump administration to use unmanned aerial attacks at will.

We have to stand up against US imperialism in all its forms: close down Guantanamo and all military bases in foreign countries; withdraw all troops and stop intervention in the Middle East; hands off Latin America.

Barack Obama has deported over 2.5 million immigrants since he took office in 2009–more than any other president. Donald Trump has boasted his plans to build a wall along the Mexico-US border and deport 11 million undocumented immigrants (he later lowered the number to 3 million). He justified these plans with his infamous statement: “They’re bringing drugs. They’re bringing crime. They’re rapists.” This is going to be the president of the United States. We need to fight him from day one.

Inauguration day can be an opportunity for women, people of color, immigrants and activists to link arms in a joint fight against all forms of state repression.