70th anniversary of the Fourth International 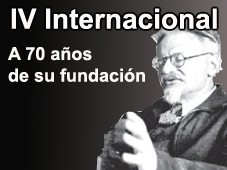 Almost 100 people gathered on September 4 to commemorate the 70th anniversary of the founding of the Fourth International. With the auditorium of the Casa Museo León Trotsky completely filled, students, young people and workers responded to the invitation of the Liga de Trabajadores por el Socialismo – Contracorriente (LTS-CC). Comrades from the Sindicato de Trabajadores de la Universidad Nacional Autónoma de México, who are waging a big struggle for the democratization of their organization, were with us, as well as city workers from Ecatepec in the state of Mexico, for whom employment is uncertain, comrades from la Hoja Obrera and from various factories in the Distrito Federal. Left-wing students from UNAM, who have been setting up independent committees in different departments, to defend Mexico’s oil, as well as members of the student committee in the law school, also attended. We received greetings from the university group En Clave Revolucionaria, the youth group Barricada, from Mexico state, and from the different sections of the Trotskyist Fraction – Fourth International, as well as from the Centro de Estudios, Investigaciones y Publicaciones León Trotsky [CEIP], from Argentina. Comrades from different  organizations, like El Militante, Oposición de Izquierda, the group Acción Revolucionaria, and the Internacionalist Group, were also present.

During the meeting, videos about some historic processes of struggle, like the 1934 Minneapolis Strike, the Russian Revolution, and the struggle of the Bolivian miners, were shown.

Speeches were given by Pablo Oprinari, member of the Editorial Committee of the magazine Estrategia Internacional, Mario Caballero, a leader and founder of the LTS-CC, and Jimena Mendoza, Coordinator of the Cátedra Libre Karl Marx at UNAM and also a leader of the LTS-CC.

In the speeches, Pablo Oprinari spoke about the process of founding the Fourth International in its historical context, and he recovered the historical memory of the revolutionary Marxists, who, in very adverse conditions, knew how to continue in the principles of Bolshevism, put program and theory into practice, in spite of persecutions from fascism and Stalinism, and lay the foundations of a new organization of the international working class. Mario Caballero referred to the relevance of lessons from the Fourth International and of Trotsky’s theoretical and political thought, for understanding Latin American reality and struggling to set up revolutionary parties in semi-colonial countries. For her part, Jimena Mendoza concluded the meeting by describing the evolution of the international Trotskyist movement up to the outcome of the Second World War, and its subsequent development; she also vindicated the validity of struggling for the rebuilding of the Fourth International by combating those within the movement who are advancing toward the dissolution of the socialist program. Finally, we invited those present, many of whom share with the LTS daily activism in universities, neighborhoods and work centers, to discuss the bases for building a superior revolutionary organization in Mexico, as part of the fight for rebuilding the World Party of Socialist Revolution.

This event is part of a constant practice, by the LTS-CC and our entire international tendency, the TF, of raising high the banners of Trotskyism, the revolutionary Marxism of our time.

Finally, with our left fists raised, we who were present sang the Internationale, the anthem of the world working class.