Macron scolds an elderly yellow vest activist that was brutally beaten by the police. 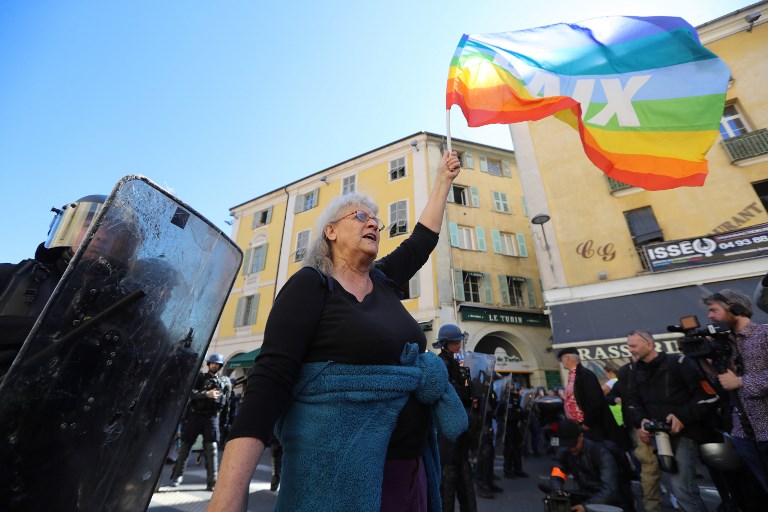 Genevieve Legay at a yellow vest protest in the city of Nice. (Photo by Valery HACHE / AFP)

As the Yellow Vest protests in France entered their 19th consecutive week, an elderly woman waving a rainbow ‘Peace’ flag was attacked by police at a demonstration in Nice. Three days later, on March 26, as she lay hospitalized with a fractured skull and five broken ribs, President Macron had this wisdom to offer the 73-year-old activist: “When one is fragile, and one can get knocked around, one does not go to forbidden places and put oneself in situations like this one.”

He went on to note that “this lady was not in contact with the forces of order,” despite video evidence of both the clash and the aftermath in which police can be seen preventing medics from intervening as she lay bleeding and unconscious.  The “lady” in question is Genevieve Legay, and her story highlights the exceptional harshness of the repressive measures taken against Yellow Vest protesters.

Since the protests began, violent repression of the kind perpetrated against Genevieve has been a regular occurrence.  At least 2,000 have been injured overall – more than were injured during the civil unrest, demonstrations, and general strikes of May 1968. The most serious injuries – maiming, disfigurement, and brain injuries resulting in comas – have been caused by riot-control devices like rubber pellet guns and stingball grenades. A confirmed count of casualties by the Against State Violence collective indicated that 111 protesters had been seriously wounded by the first week of January – well before Genevieve went out to “demonstrate [her] right to protest.”

The level of violent repression against Yellow Vests has only increased. The lead-up to week 19 was marked by reports of 5,000 armed soldiers tasked with “anti-terror” duty in response to planned demonstrations.  A French military general noted that soldiers “may open fire” if lives are at risk.

The Yellow Vest movement began on November 17th, triggered largely by a fuel tax increase, but rooted in general discontentment among a huge cross-section of people drawn together against worsening economic inequality – a trend ongoing since the 80’s but sent into overdrive under Macron. Thousands of roads were barricaded and 280,000 demonstrators were in the streets within the first five days. During this time in France, 75% of the population supported the movement while Macron’s approval rating hovered at 28% (lowest of any French president since 1958).