Forced overtime, chronic understaffing, and confusion tactics are among the many assaults on Kellogg’s workers in the midst of a devastating pandemic while the company raked in record profits. 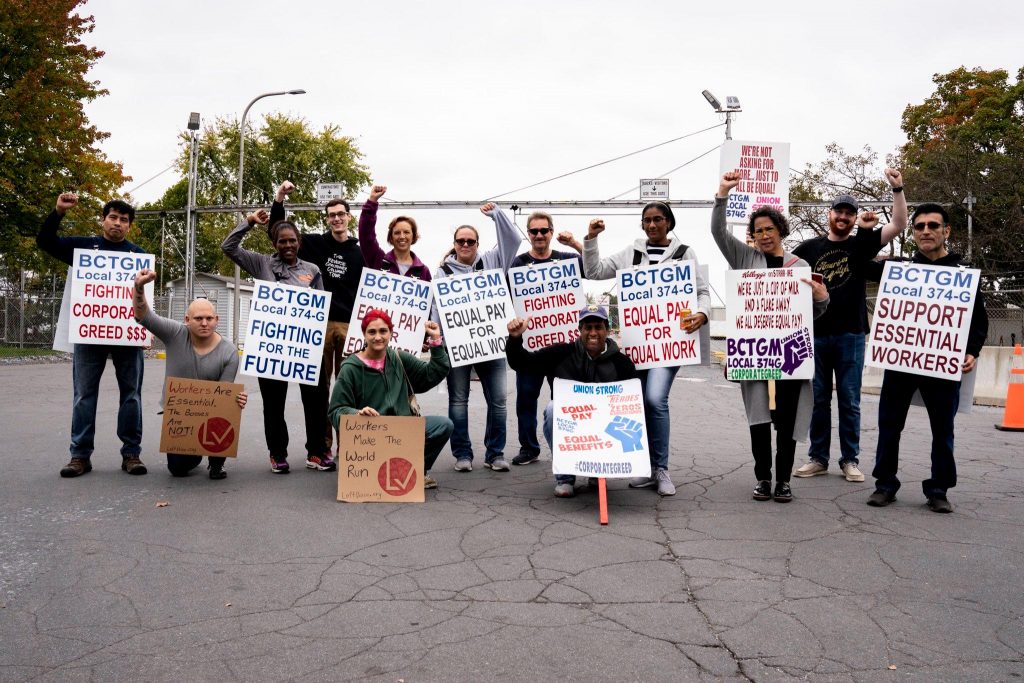 On Tuesday, 1,400 workers in four Kellogg Company facilities went on strike against the company’s plans to cut wages, benefits, and jobs. Over the weekend, Left Voice went to Lancaster, Pennsylvania to support the striking workers and learn about their working conditions and demands.

Over the course of the pandemic, the company raked in record profits as workers put in twelve- to sixteen-hour shifts seven days a week, sacrificing their health and time with loved ones to keep the company running. Meanwhile, executives got multi-million dollar bonuses.

The company’s proposed contract would cut pay, health care, and benefits. Workers describe it as “insulting.”

The employees’ primary grievance was the company’s divisive two-tiered system, which was instituted in a contract signed seven years ago. The system divides workers into two tiers, forcing newer and older employees working side-by-side to labor under vastly different pay and benefit plans. According to workers, the new contract offered by the bosses does nothing to eliminate the inequity fostered by the two-tier system, and newer workers will continue to make significantly less money than more seasoned workers for the same work.

Kellogg Company employees are part of the Bakery, Confectionery, Tobacco Workers, and Grain Millers’ Union (BCTGM), which also represents workers at a number of companies. Many of these workers went on strike throughout this year, including Frito-Lay, whose strike lasted nineteen days, and Nabisco, whose strike lasted for a month.

While the strike’s impact on Kellogg’s profits is not yet known, workers have heard that the company may be losing a million and a half a day from each plant. The strike is the strongest weapon workers have against the bosses, representing the true power of the working class to stop production and threaten corporate profits.

Kellogg has stated that it offered workers increased wages and benefits and added that on average, its employees earned a yearly salary of $120,000 in 2020. On the picket line, workers scoffed at this claim. According to workers on the picket line, most of them are not making the six-figure salaries advertised by Kellogg. An average Tier 2 (Transitional) employee starts with $19 an hour and Tier 1 (Legacy) is $32 an hour and higher according to their seniority.

The company claims that workers make high wages, but are hiding the fact that some workers are only able to make high wages if they work several hours of overtime every day, which takes an enormous physical and mental toll. With a true forty-hour work week, the average worker would make around $40,000 (Tier 2) and $65,000 (Tier 1) annually. Workers want to end this difference, and have everyone on Tier 1, “equal job, equal pay.”

One worker, who lives an hour away from the facility, reported that after a sixteen-hour shift, they had to choose between staying at a hotel to be at work on time the next day and returning home to take care of their sick relative.

Another worker reported working for six weeks straight, 80-85 hours every week, without a single day off. He travels over an hour and a half in his commute from work and often the managers would let him know at the last minute that he would have to stay at work for another 4-8 hours.

Cars passing by the picket line showed overwhelming support for the strike, but some workers reported dismissive reactions of passersby. “Some people think that we’re being greedy or that we’re asking for too much,” one employee said. “They don’t know what goes on in here.” Such anti-worker reactions from the community are usually a result of company propaganda, which uses mainstream media to turn public opinion against workers (as Kellogg’s is doing). But it’s also part of a much longer neoliberal offensive against the working class and its institutions to impose capitalist hegemony — painting workers, particularly unionized workers, as lazy.

Workers understand that the meager perks they were offered during the pandemic, such as two $500 checks that were taxed and a couple of free lunches, were hollow and temporary. “During the pandemic, they called us essential. Now they claim our jobs are easy and that we make too much.” The hypocrisy is clear — in 2020, Kellogg CEO Steve Cahillane made nearly $12 million. This, during a year when workers were forced to come to work and provided with passes to make sure that they could report for their shifts irrespective of external conditions, while the bosses “worked” from home.

While the bosses are telling the workers that they are replaceable and that they could hire anyone to take their job, Kellogg workers have a keen understanding of their indispensability in the production process. When a fire started in the Memphis plant and temporarily stalled production, workers at the other plants picked up the slack.

There was a great deal of conversation about what would happen after the holiday weekend. Workers said that the company is planning to bring in new contractors to fill the jobs of those on strike. While workers were confident that scabs won’t be able to run the factory in full capacity, it will be necessary a democratic debate among the workers about how to respond to this anti-strike maneuver. The power of the strike is derived directly from halting production, and if the factory starts producing, the effects of the strike will be weakened.

When the company brings scabs, they will have to find living arrangements for them. One worker joked: “If they put scabs up in Mount Joy, we’ll give them a nice welcome. Probably not a bowl of cereal though!”

The strike began just after the facility’s monthly deep-cleaning. Workers stated that starting production back up after the clean is a difficult task that requires in-depth knowledge and familiarity with the machines — something that the supervisors don’t have. “We cleaned out the whole plant. Took everything apart to give it a thorough clean… good luck to the supervisors to put it back together!”

The company is reportedly running trucks between the warehouse and factory to create the illusion of continued production. “They’re playing mind games. We know the sound of an empty truck.”

Most of the workers on the picket line in Lancaster have worked at Kellogg between six and thirty years. Their roles at the company range from machine operators to packagers to self-described “floaters” who possess an in-depth knowledge of the entire production process. Kellogg has many employees that have worked there for a long time, but is chronically understaffed, relying on grinding its workers to the bone to meet its production goals.

One employee told us that before he was hired seven years ago, the company hadn’t hired any new employees in nearly a decade. Through this period, workers had to take on huge task loads, as older workers retire or quit and exits were not offset with new hires. Thus, over the years, workers only see their workloads increasing and are forced to do longer and longer work days due to the company’s refusal to hire more workers and redistribute work hours.

Kellogg appears to have strategically taken on new employees just before new contract negotiations. Workers reported the company’s deceitful tactics to reduce the impact of the strike by taking advantage of new hires. Just two weeks before the strike, the company hired several new employees without disclosing the upcoming contract negotiations, dissolution of the possibility of ascension from Tier 2 to Tier 1, and possible strike. Several seasoned employees reported that, when it was clear that the strike would be called, management displayed signs around the facility telling the new workers that they could work during the strike if they handed in their union cards. These confusion tactics were meant to exploit the new hires as pawns to subvert the strike, quickly training them and then subsequently leaving them in the dust. Kellogg, located in non-right-to-work state Pennsylvania, is a closed shop, which means that the workers would be fired as soon as a new contract is adopted. The recently hired workers also have not completed their probation period, and Kellogg could use their participation in the strike against them to justify firing them at the end of the probation period.

The new workers didn’t fall for the bosses’ tactics, instead joining their veteran co-workers on the picket line. The sense of camaraderie between the workers is clear. Rather than allowing the bosses to create divisions between newer and senior workers, they stood together against the company’s plans to strip benefits and pay for new, current, and future employees. “We are out here for them,” some of the more seasoned workers shared. “They do the same job as us. They have the same risk of injury as us. They should have the same pay and same benefits as we do.”

Workers are aware of the 2014 Kellogg workers’ struggle in the Memphis plant, during which workers were locked out by the company for nine months. They know that this strike can last weeks or months, so to be prepared for a long fight, workers will have to develop democratic spaces where they can discuss what steps to follow in their struggle. A triumph of Kellogg’s workers will be without a doubt, a source of inspiration for the thousands of workers that are on strike or voted for strike authorization across the country.