8M: The Feminist Movement Defied Prohibitions and Took the Streets in Madrid

Although the “progressive” government of Pedro Sánchez did everything it could to prevent mobilizations, a major demonstration took place in the Spanish capital for International Women’s Day. 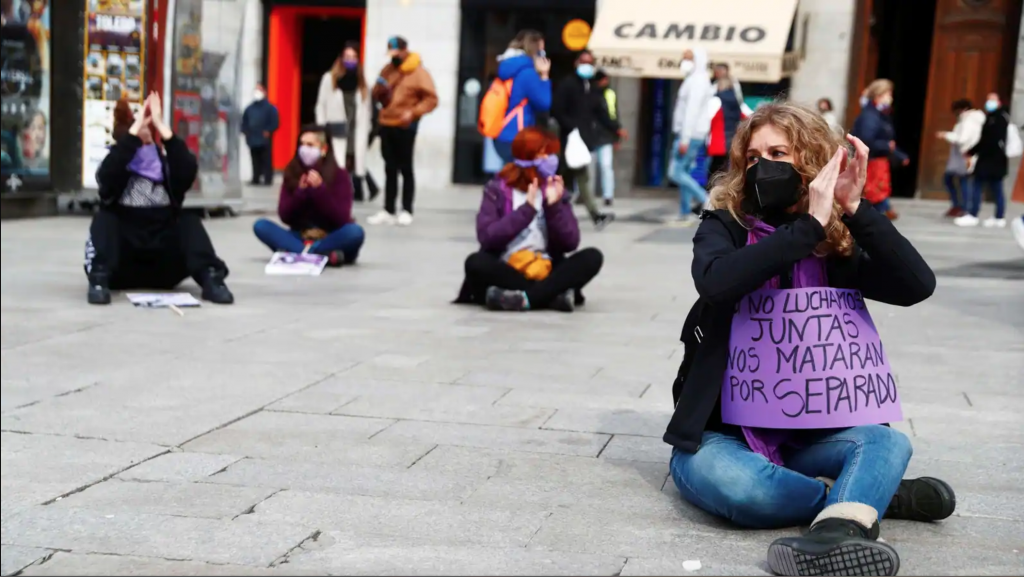 8M, International Women’s Day, made itself felt in Madrid despite police repression and the ban on gatherings. On Monday, multiple self-organized demonstrations took the streets of Madrid throughout the day, making it clear that the feminist movement will not be silenced.

The day was marked by feminist disobedience against the prohibitions of the government of Pedro Sánchez. The coalition of the Spanish Socialist Workers’ Party (PSOE) and the left-wing alliance Unidas Podemos, which boasts of being the “most progressive government in history,” used the pandemic as an excuse to try to pacify and deter the mobilizations commemorating this international day of struggle.

But the government’s efforts were unsuccessful. At noon, a group of young people in Puerta del Sol, the central square in Madrid, participated in the first demonstration against the ban. The police were deployed immediately, with dozens of vans and hundreds of cops surrounding the square in order to intimidate protesters. Shouts and chants of “We are not afraid” and “Freedom to march” echoed throughout the area, the mobilization’s response to the cops’ intimidation.

The day culminated with multiple demonstrations in the streets and an aggressive police intervention to identify several protesters in Plaza Neptuno. Dozens of police surrounded one group of marchers, detaining three activists and accusing them of being the “organizers” of the march, despite the fact that no single organization had called the demonstrations. Most of the marches that day were spontaneously organized by feminist networks in Madrid.

Hundreds of women dressed in purple passed through Retiro Park and advanced towards the famous Fuente de Neptuno, singing, “Freedom of expression and mobilization!”

“Here are the feminists!” could be heard throughout the city on Monday. In light of the government’s bans on mobilizations, the chant carried a special meaning. The people marching on Monday refused to be silenced.

“Paseos feministas”
There were also massive “paseoes feministas” or “feminist walks” in the neighborhoods of Vallecas, Arganzuela, and Lavapiés, among others. “To those who erase our murals, prohibit us from demonstrations, and want us at home and silent, we have an answer: the streets are ours!” they announced in a large mobilization in Vallecas. “Vallecas also disobeys!” read the banners painted by protesters.

Outrage over the ban on the march
The demonstrations were explicitly critical of the “progressive” government and its censorship: “If it prohibits the 8M, it is not feminist!”

“They are incomprehensible prohibitions because they only apply to the 8M call and not to other mobilizations. From the point of view of public health concerns, it is incomprehensible, especially considering that this march was called with security measures to guarantee safe and sanitary conditions,” said one marcher, a member of a feminist self-defense group participating in the day’s events.

Protester María Pacheco explained that it was vital to take to the streets because “the socioeconomic crisis disproportionately affects women — with more unemployment and precariousness as a result of the gender gap…We are seeing murals being erased, but what it is really about is erasing women themselves from the street and from public space. The extreme right erases our murals but the ‘progressive’ government removes us from public spaces by prohibiting a demonstration like the 8M.”

At the end of the demonstration, with a massive sit-in in la Plaza de Neptuno, feminists read a manifesto in which they denounced the fact that women are the ones who occupy the most precarious jobs during the pandemic. They also called for the repeal of cruel immigration policies, increases in funding for public services, the elimination of patents on vaccines, full labor rights for domestic workers, and an end to precariousness, among many other demands.

After the demonstration concluded and the crowd began to scatter, a dozen police officers surrounded two demonstrators, with the intention of identifying them as “organizers” of the demonstration in violation of the law. As the police grabbed them, the remaining protesters began to chat: “They touch us, they touch us all!” and “Shame, shame.”

One of the two protesters targeted by the police and a leader of the socialist feminist group Pan y Rosas in Madrid, Josefina Martínez, said that the cops, in addition to taking her information, demanded to know whether she and her partner had organized the march. “What they want is to find a culprit and someone to criminalize. This was self-convened, there were no organizers. It was self-convened by the women’s movement which does not want to be silenced. It is not something that someone in particular has decided, but a response to the scandalous fact that the women’s demonstrations were canceled,” she explained.

The “most progressive government in history” acted to repress one of the most militant feminist movements in the world on International Women’s Day. It claims to be on the side of women, but it is clear that it only serves capitalist interests, using sexism and state violence to exploit women and make a profit. The brave mobilizations by feminists across Madrid on Monday showed that the feminist movement will not let itself be co-opted by the promises of a government that calls itself progressive while unleashing the police to repress the struggle of working women in the streets.