On August 6, at half an hour before midnight, almost 100 dock workers received text messages on their mobile telephones asking them to check their emails. These members of the Maritime Union of Australia (MUA) unsuspectingly logged on to their accounts only to find out that Hutchison Ports Australia had sacked them all by email. 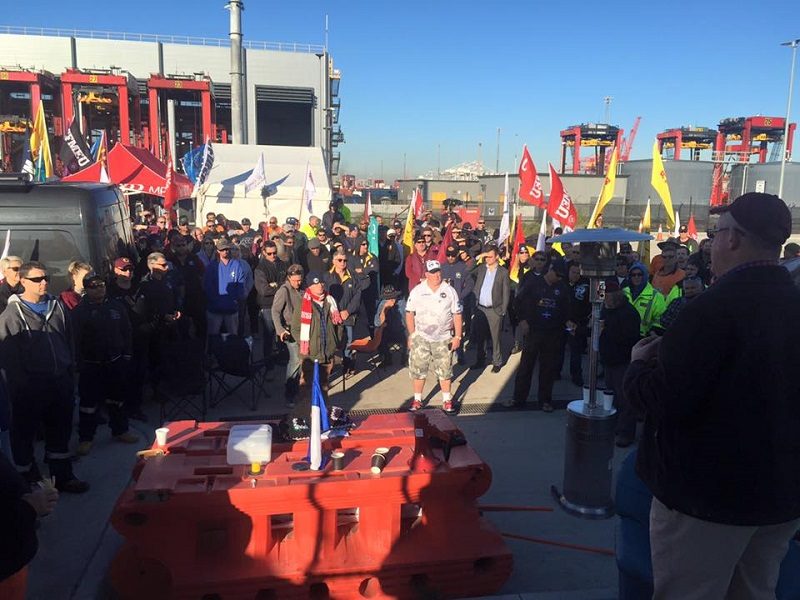 Within hours MUA members began protesting outside the gates of the company’s two port facilities. This dispute has quickly escalated into the biggest confrontation on the Australian waterfront since the infamous Patrick Dispute of 1998.

A total of 97 dock workers, known as “wharfies” in Australia, have been sacked by Hutchison Ports. In Sydney, 56 wharfies were sacked from the company’s Port Botany terminal and another 41 from the Fisherman Island terminal in the Port of Brisbane. This number is well over 40 percent of the company’s 224 member workforce.

Within hours of receiving the devastating news, MUA members began protesting outside the entrances to the two Hutchison Ports terminals. For the first few days of the dispute, a handful of wharfies at the Brisbane terminal also occupied the facility’s lunchroom.

These sackings by Hutchison Ports are part of a union busting exercise designed to create a more compliant, docile workforce in an attempt to introduce increasing casualization. The company’s sackings have targeted virtually every single MUA member that has stood up at Hutchison for union rights and safety. Almost every single MUA member elected to union site committees at the two terminals has been sacked. The company got rid of virtually every Health and Safety Representative (HSR), an elected position that grants certain powers and safeguards under Australian workplace health and safety laws. Even members who were occasionally elected as shift delegates or simply spoke up at union meetings were not spared.

Hutchison Ports Australia is part of the massive Hutchison Whampoa conglomerate, a major player in world telecommunications and the biggest private port operator in the world. The conglomerate is controlled by Hong Kong billionaire Li Ka-Shing, who was once dubbed “Asia’s Most Powerful Man” and has an estimated net worth of over $30 billion.

The entrance of Hutchison into Australian ports is the result of a policy pursued by both major political parties – the conservative Liberal Party and the social-democratic Labor Party – after the historic Patrick dispute in 1998. Both Liberal and Labor have promoted a policy of waterfront “competition” and “reform” which included the establishment of a third container terminal in major Australian ports. State Labor governments in New South Wales and Queensland have spent billions in building new port terminals in an attempt to break the decades-long “waterfront duopoly” of Patrick Stevedores and DP World (formerly P&O Ports).

Before starting its operations in Australia, Hutchison Ports signed a union agreement with the MUA. The union hailed this agreement as a model for automated port terminals, with its provisions for permanent jobs on a 30-hour a week roster.

News of plans by Hutchison Ports to radically change their industrial and competitive situation started to surface two months ago. On June 29, the Australian Financial Review (AFR) reported on a company memo which warned that “over the next few weeks and months, there will be a noticeable reduction in our business” that “will result in job losses”. It further stated that the company hoped to “remain active in the Australian market but at a lower cost base to our current situation”. The AFR was quick to offer advice to Hutchison, telling the company that it “failed to get its cost base right because it got industrial relations wrong” when it signed “an enterprise agreement that appeared to surrender much of the industrial relations ground gained by its competitors over 15 years of hard grind”.

One month later more news of Hutchison’s plans came to light. The July 28 issue of AFR reported on another company memo which outlined plans to slash the workforce at Hutchison by 40 percent. Warren Smith, the Assistant National Secretary of the MUA, told the AFR that the company “had embarked on a strategy dubbed Phoenix Rising to bust the union’s influence”, and that this “unbelievably twisted mix” of “James Bond and Harry Potter” was an attempt to destroy the union. A statement from the union the next day said that, while the MUA was willing to “unleash every tool available . . . to stop Hutchison Ports Australia unfairly sacking almost half of its waterfront workforce”, the union was also prepared to accept job cuts if the company could justify them. Smith concluded his comments by saying that “if [the job cuts are] genuine, we are prepared to come back with a range of creative solutions to get through whatever difficult times the company is confronting”.

Just one week later, without any consultation with the Maritime Union, Hutchison Ports sacked 97 workers from its 224 strong workforce. The text message that these workers were sent on the night on August 6 read; “Please check email address that payslips are sent to for a personal letter regarding a redundancy program notification. You are not required for your allocated shift. Please disregard your most recent work order. You are not required on shift until further notice”.

The email that these workers were confronted with stated that; “The intended last day of your employment will be Friday 14 August 2015. I realise that this is a lot of information to take in. Accordingly you are will (sic) not be required to attend work effective immediately. We will of course pay you your normal salary to your last date of employment”. Then, to add insult to injury, the email concluded with the words; “Don’t come in to get your belongings from the locker, we will send them to you”.

The day after wharfies received these texts and emails, the conservative Liberal Minister for Employment Eric Abetz was defending their use by Hutchison Ports to sack workers. Abetz told ABC News that “if the culture is that employees can text message the boss and they in fact expect the boss to text message them, then that may be an appropriate methodology”.

The defence by Abetz of this method of sacking workers has infuriated maritime unionists and fuelled their continuing protest. Unionists have also been quick to highlight the fact that the Minister’s great uncle was a high-ranking Nazi, ambassador in the German Embassy in Vichy France. Otto Abetz is believed to have ordered anti-Jewish drives in the occupied nation, and in 1945 was tried and jailed for war crimes.

The 97 sacked MUA members have received wide-ranging support from workers and unions both in Australia and from across the world. They need your support as well.