Last Friday, the Windy City was having none of Donald Trump’s hot air. Thousands of youth, workers and women took to the streets of Chicago to protest the billionaire presidential candidate. 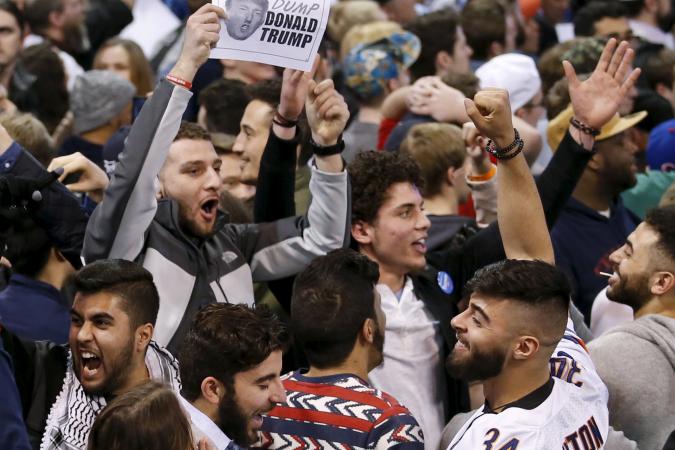 Black, Muslim and Latino organizations united in a strong show of opposition at the University of Illinois where a Trump rally was set to take place. A few hundred entered the venue disguised as Trump supporters to protest inside, while thousands of others gathered outside and marched in the surrounding area. After several minutes, the event was called off and protesters streamed into the hall, tearing down Trump signs as they cheered. Outside, Trump protesters jeered — some even chanted “White Power” and raised their hands in the Nazi salute.

Four people were arrested and several were injured. Although there is video of Trump fans throwing punches and proudly presenting the Nazi salute, only anti-Trump protesters were arrested .

Since the protest, several different Trump-related events have been cancelled, including an event by DePaul University College of Law set to take place in the Chicago Trump Towers and another in Cincinnati, Ohio.

The protest tactics have varied, from several individuals sneaking into rallies and facing attacks, to mass mobilizations like last Friday’s, which demonstrated a marked advance in the solidarity between different groups — an advance in the struggle to challenge the unveiled bigotry and virulently hateful character of Donald Trump and his base.

Clinton tweeted, “Violence has no place in politics” — a sick joke by the former Secretary of State who bombed Libya, Syria, Afghanistan, Iraq and assisted the coup in Honduras. Clinton also likened the protesters’ “violence” to that of the Charleston massacre, when white supremacist Dylan Roof shot and murdered nine Black people in a historically abolitionist church.

Neither Sanders nor Clinton have laid claim on the actions. Although he blamed Trump’s rhetoric for the violent confrontations, Sanders has not shown outright support for the protesters and has not called for united actions against the bigot billionaire mogul. In turn, Trump blamed Sanders completely (while sparing his longtime friend Hillary Clinton) and threatened to send his supporters to Sanders events. Trump also threatened last Friday’s protesters , saying he would press charges and “ruin their lives.”

While it is clear the bigotry and violence of Trump and his supporters are the cause of the heated clashes, it is not clear how the movement will advance to challenge the individual bigotry and systemic racism that Trump represents and advocates. Chicago demonstrated how a united and combative fight led by oppressed people can shut down a billionaire bigot. It also forced Clinton to reveal herself when she equated the bigots to the protesters of bigots.

White supremacist attacks against oppressed people are taking place throughout the country with disturbing frequency. Last month in Anaheim, California — a long-time stronghold of the Klu Klux Klan — Black and Latino youth shut down an attempted Klan march. In response, members of the Klan targeted and stabbed young people in the streets in broad daylight. Another stabbing took place just days later at nearby Huntington Beach, when an Illinois police officer targeted Muslim youth .

Trump’s anti-Muslim jingoist rhetoric serves as “inspiration” for these seemingly isolated violent attacks. In this context, the organization and mobilization of oppressed people, youth, women and working class people is a fundamental key to stopping white supremacist attacks. Chicago’s display of opposition to Trump is an inspiration, but can not remain an exceptional case. The mobilizations must oppose not only Trump and the hateful politics that he and his followers espouse, but also the capitalist system that gives people like him power, money and physical defense. The cops only targeted the oppressed and never the Klan or Trump supporters. Only independent, political organization by the oppressed and working class and self-defense against bigotry can stump the Trump and the phony good guys of the Democratic Party.

Through the organization of workers, women, Black, immigrant and other oppressed people will the tide of racism be shut down. Yesterday’s victory against Trump is a microcosm of the power of the working class and oppressed people.