Communism Made in Germany

100 years ago, Germany was an epicenter of communism. The Communist Party of Germany (KPD) had up to 300,000 members. A new anthology presents the latest historical research on this period in English. 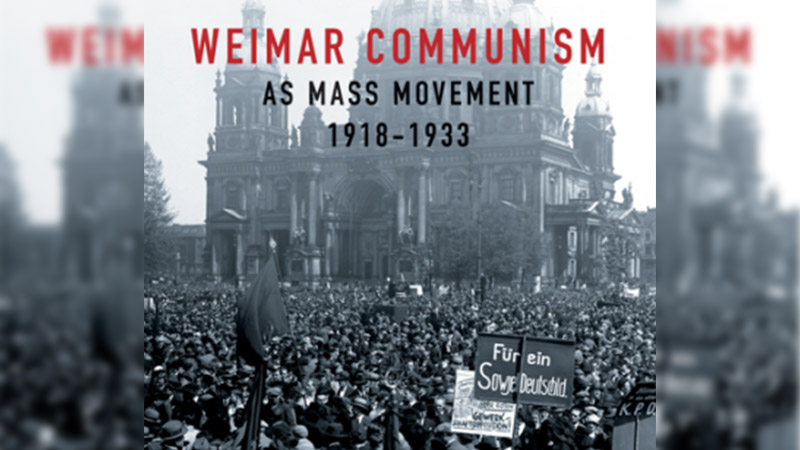 Germany in 2018 is seen as a bastion of capitalist stability. It is hard to believe that 100 years ago this country was an epicenter of the world revolution, just behind Russia – The Communist International held its first congresses in Moscow, but the proceedings were in German. The Youth International had its headquarters in Berlin.

In the face of a never-ending crisis of capitalism, left-wing alternatives are being sought everywhere. Now that the once celebrated Greek left party SYRIZA has been transformed into an instrument of the most brutal austerity, some are looking back to the past for inspiration. Why not look to the Weimar Republic? After all, during this time the Communist Party was a mass force with up to 300,000 members. In the last free elections, the KPD won almost 38 percent of the votes in Berlin.

Yet little is known about this remarkable period in revolutionary history abroad. Fortunately, the anthology Weimar Communism as a Mass Movement, compiled by Berlin historian Ralf Hoffrogge and Welsh lecturer Norman LaPorte, remedies this situation. Thirteen predominantly young historians who study German communism have contributed essays to the collection, mostly in the form of short summaries of their doctoral theses.

The KPD (Communist Party of Germany or Kommunistische Partei Deutschlands) was founded on New Year’s Eve 1918 by two groups – the Spartacus League around Rosa Luxemburg and Karl Liebknecht and the International Communists of Germany (IKD). The latter group is not well known, even among leftist circles, but as the essays in this anthology show, it has an extraordinary revolutionary history. During the first World War, the old Social Democracy (SPD) had split into the “Majority Social Democrats” (MSPD) and the moderate “Independents” (the Independent Social Democratic Party, or USPD). In the city of Bremen, however, left-wing radicals took over the organization. This group – led by Johann Knief, Paul Frölich and Karl Radek – formed the IKD. The Spartacists, despite all their criticism of the Social Democrats, had been holding out in the USPD together with Karl Kautsky and Eduard Bernstein for more than a year and a half. The “Bremen Left Radicals” of the IKD, in contrast, called for the formation of a new, revolutionary party as early as 1916 – and were only able to convince the Spartacists to break from the USPD late in the game.

The second section of the anthology consists of biographies. Florian Wilde summarizes his recently published biography of KPD chairman Ernst Meyer and Mario Kessler introduces Ruth Fischer, who led the far left wing of the party and became its chairperson in 1924 at the age of 29. Ralf Hoffrogge focuses on Werner Scholem, who served as the ultra-left “Orgleiter” under Fischer, and Norman LaPorte gives a preview of the first English-language biography of Ernst Thälmann. The anthology also includes an essay on the “red millionaire” Willi Münzenberg, who founded the Communist Youth International in the back room of a pub in Neukölln and then built a communist media empire.

Biographies are very much in vogue among historians of communism – the author of this review has also recently published one. The genre allows readers to discover the human side of these otherwise larger-than-life revolutionaries: their doubts, their affairs, their disappointments. The biographical form, however, runs the risk of presenting the development of the KPD simply as a clash of strong characters – the cautious strategist Meyer against the restless agitator Fischer and so on.

Fortunately, many of the articles in this collection go against this tendency. Marcel Bois summarizes his 600-page tome about the Left Opposition to Stalinization in just 15 pages. No less interesting are articles about the “red trade union” of Berlin metal workers or communist agitation among Bavarian farmers. Despite its fascinating topic, Constance Margain’s article on an international “union of sailors and harbourworkers” borders on illegibility and stands out negatively amongst the other works in the anthology.

Fittingly, the volume ends with the downfall of the KPD itself: Recently accessible archive materials provide new evidence of the hopeless confusion in Moscow after the transfer of power to Hitler. While thousands of German Communists were imprisoned, the Comintern leadership under Stalin officially insisted that Hitler would soon fall into ruin all by himself – while in the background, the pact with Hitler was already being prepared.

Weimar Communism as a Mass Movement provides vital new insights into one the most well-organized and influential revolutionary movements in history, making use of archives that have not been available in English before.