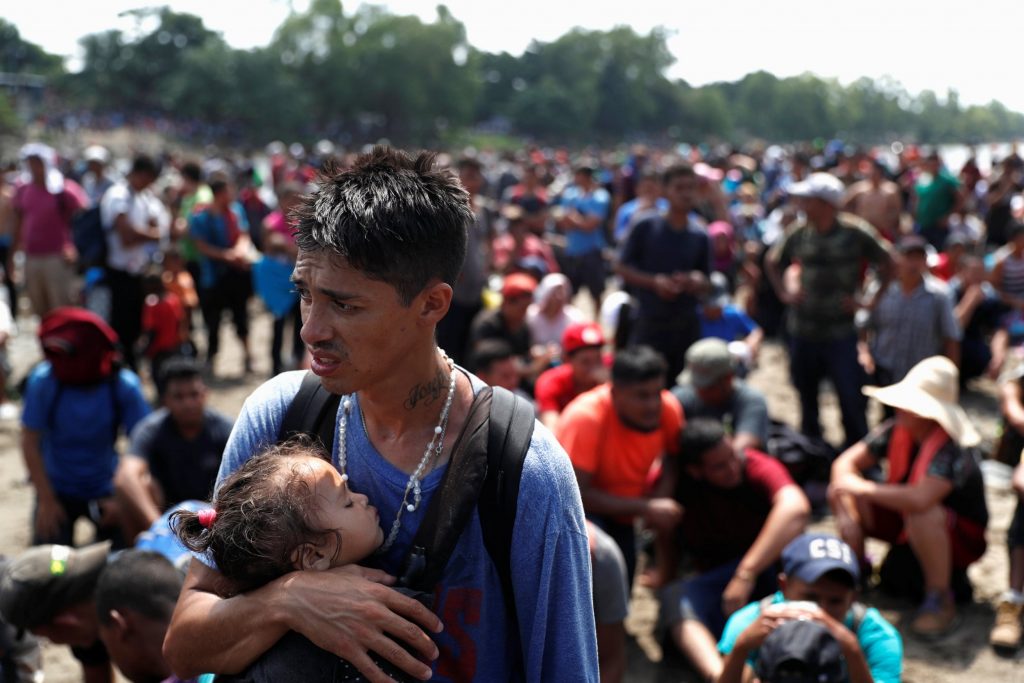 Women and children, desperate to cross the Mexican border, faced off against the Mexican police last week. They strained at fences and jumped into a river to try to complete the next step of their journey towards the U.S. As the Mexican border patrol launched tear gas at them, they retreated, only to come back repeatedly. The heart-wrenching images caused a media frenzy and the Mexican government finally allowed them to pass.

The Trump administration has seized on this as an epic campaign opportunity against the Democratic Party. Only a few days before the national elections, in a racist move that rivals the “Willie Horton” ads from the 1988 presidential election, Trump put out a xenophobic campaign ad with images of Luis Bracamontes, a Mexican immigrant who was deported twice, but made it back into the country and killed two Sacremento police officers. In the video, Bracamontes brags about the killings and laughs that he will kill more. The rest of the video includes images of people pushing down a fence. At the end of the video appear the words “Who else would Democrats let in?” and “President Donald Trump and Republicans are making America safe again.”

But safe from whom? Where many of us see desperate people, fleeing poverty, joblessness, and violence in their home countries, the right wing only sees potential criminals. Trump called the slow approach of these families—who are traveling on foot—a “national emergency” and although the migrants are still in Mexico City, Trump has moved 5,000 troops to the border as part of “Operation Faithful Patriot” . He’s announced that “Anybody throwing stones, rocks… we will consider that a firearm” and that he is ready to send 10,000 more.

He has also threatened to cut U.S. aid to Guatemala, Honduras and El Salvador, stating that they “were not able to do the job of stopping people from leaving their country and coming illegally to the U.S. We will now begin cutting off, or substantially reducing, the massive foreign aid routinely given to them.” The message is clear: as punishment for impoverished people fleeing these countries, the U.S. will impose further poverty on them—an especially confused threat since the largest portion of that aid goes towards agricultural development that benefits the United States. But the violence, hunger and joblessness are too strong for anything to deter the caravans; there are already three more groups making their way towards the U.S. through Mexico.

The Democrats: Not Immigrant-Friendly

The racist campaign ad argues that the immigrant featured in the video was “let in” by the Democrats and that they “let him stay.”

But the depiction of Democrats as crusaders for undocumented immigrants is entirely laughable. After all, Obama deported more people than any President in history—including Trump— and the first images of immigrant children in cages were from the Obama administration. The Guardian reported that “Under Obama, Secure Communities [via ICE] made local arrests the key entry point to a deportation pipeline that removed 2.5 million from the country.” and that “287(g), authorized by Bill Clinton… deputizes local police and jails to search out undocumented immigrants.“ Many of the migrants in the caravans who are now attempting to get to the U.S. were originally deported during the presidency of a Democrat.

The silence from the Democratic Party in response to the migrant caravan is deafening, as much of the press has reported. Senate Minority Leader Chuck E. Schumer and House Minority Leader Nancy Pelosi issued a statement that said that Trump was “desperate to change the subject from health care to immigration because he knows that healthcare is the number one issue Americans care about,” as if thousands of people fleeing horrific conditions are not worth caring about.

This isn’t surprising. The Democrats are between a rock and a hard place in relation to immigration. There are more than 10,000 migrants on their way to the U.S. border in part because of the policies of Barack Obama and Hillary Clinton who orchestrated a coup in Honduras in 2009. The misery that drives these Honduran people to walk hundreds of miles in the hot Mexican sun was created by the imperialist policies of the Democratic and Republican party. And it was created most directly and concretely by the Democrats.

While some more “progressive” Democrats have called for abolishing ICE—and instead using the INS to deport people—none have a real solution to the fact that these migrants are coming to the border and are desperate to get in. The Democrats, because of their need to look more progressive to their electoral base, cannot criminalize these refugees. At the same time, they cannot fight to allow 10,000 migrants into the country for fear that more will come, disrupting the U.S. ruling class’ ability to exploit immigrants as cheap labor while making sure they are afraid of deportation. In the face of this conundrum, the Democrats have chosen silence.

After winning the House and losing seats in the Senate, Nancy Pelosi made clear the Democratic Party strategy. She said, “”We will strive for bipartisanship, with fairness on all sides. We have a responsibility to find our common ground where we can, stand our ground where we can’t, but we must try. We’ll have a bipartisan marketplace of ideas that makes our democracy strong.” Far from a call to mobilize against the increasingly radicalized and emboldened right wing, Pelosi called the Democrats to find common ground.

The migrant caravan cannot be addressed by conciliation, compromise or moderation, and it certainly can’t be ignored. There is nothing moderate about the conditions that exist for people in these Central American countries. They are desperate, and the xenophobes who are terrified of people rushing to the border aren’t entirely wrong about what’s in store—these folks will fight to get in.

No Votes for an Anti-Immigrant Party

Only socialists can give a coherent response to the humanitarian crisis posed by the migrants. We need to fight to end the imperialist intervention in Central America, which has destroyed any semblance of stability in those countries. U.S. meddling has meant violent coups, but the economic instability is also due to free trade policies like CAFTA  which, as  a Medium article pointed out, “has restructured the region’s economy and guaranteed economic dependence on the United States through massive trade imbalances and the influx of American agricultural and industrial goods that weaken domestic industries.” A socialist response to the migrant caravan lays blame squarely where it belongs: with both imperialist parties.

In 1848 Marx told us that workers had no country and that workers of the world should unite. But throughout the history of socialism, those who sought reform rather than revolution have consistently swept internationalism under the rug, ignoring capitalism’s effects on the most marginalized and citing the need for compromise and moderation. But the only possible compromise and moderation on these issues will be on the backs of the most oppressed sectors of society.

Today’s most famous self-proclaimed “socialists” —who run within the Democratic Party and are determined to support it—sing a very different tune from Marx. Last year, Bernie Sanders said that we needed corporate patriotism. Ocasio Cortez called to abolish ICE… and said that the INS should deport people instead. We do need a movement to abolish ICE, but we also need to argue for the abolition of borders.