Like a bad imitation of Pinky and the Brain, who every night says
“Let’s try to take over the world”, Trump announced he is seeking the Republican party’s nomination for the upcoming presidential race. 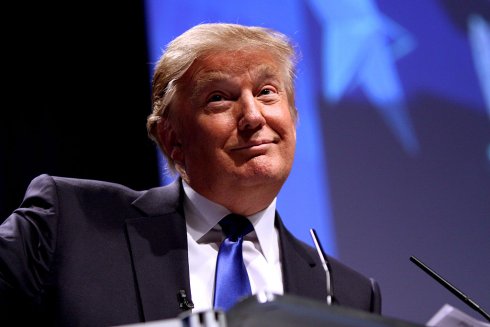 Between offensive remarks against Mexico the magnate announced he is running for the Republican candidature, a post he will have to win from another eleven candidates.

Donald Trump, a real estate and construction investor and owner of a fortune of at least 8.700 million US dollars, claimed to be the only one that can make the US great again.

His proposals include taxing Mexican imports repealing president Obama’s initiative on immigration, and supporting the right to bare arms. He also talked about a harsh foreign policy against any one who opposes the United States such as China, Iran, and Russia

The Imperialist Oppression in Numbers

Displaying his ignorance and racism, In his speech Trump claimed that “Mexico is economically drowning the US, which was not based on any material facts,

During the administration of Felipe Calderon, the Merida Initiative was signed With the goal of fighting drug trafficking, Mexico saw the militarization of the country costing hundreds of thousands of lives, forced disappearances and other human rights violations such as rape and torture.
This has pushed entire communities out of their homes, fleeing the violence perpetrated by the Mexican military and the drug cartels

Add this to the 145,287 million in foreign debt, which 83% of is paid in US dollars, and it puts Mexico in the eighth position worldwide in debt to international organizations.
Who’s drowning whom?

About Drug Cartels And Violence

Undocumented immigrants work for the lowest salaries on the market. A Mexican male makes around $22,500 dollars a year while the average salary is $56,340. It goes to show that historically the exploitation and oppression of immigrant workers makes the riches of the north possible.

All the while drug trafficking has risen to 40 million dollars a year; the United States being the main consumer of drugs trafficked by the Mexican drug cartels. That traffic could not exist without the collusion of the United States police and border authorities.

And what can be said about Obama’s call to to the Mexican government to prevent immigrants from reaching US soil? “El plan frontera sur” (the southern frontier plan) gives permission to the border patrols to deport any man, woman or child caught trying to cross. That’s when the the authorities don’t just throw them into the arms of organized crime, like in this past June in Sinaloa when a group of armed men opened fire against a 100 immigrants leaving, 13 survivors, 3 dead, and the rest disappeared.

Donald Trump’s xenophobic speech incarnates the racial hatred typical of many politicians across the United States who forget that the world’s biggest super power was built by immigrants most notably Mexican and Chinese, thanks to the theft of half of the Mexican territory in the XIX century.
These kinds of speeches validate the racial violence against blacks and Latinos that can be seen on a daily basis like the case of Erik Sánchez.

First of all there already is a wall. And it took tens of thousands of human lives because immigrants sought other ways to cross the border, through the Arizona desert for example. What is even worse is that he said that he would hire one of his own firms to build a new wall.

Not to mention that the hotel and construction industry -where he also has investments – employs a lot of Latino workers. The American, Latino and black workers cannot hope for anything positive from Donald Trump, a man who has made his fortune trampling over exploited workers.

In future notes we will be talking about the other candidates’ proposals for the 2016 presidential race.