On Tuesday, Senator Elizabeth Warren (Democrat- MA) supported Ben Carson’s nomination as the Secretary of Housing and Urban Development. Ben Carson not only has no experience in the field of housing, but has explicitly come out against the Fair Housing Act and may not even support a bare minimum wage. 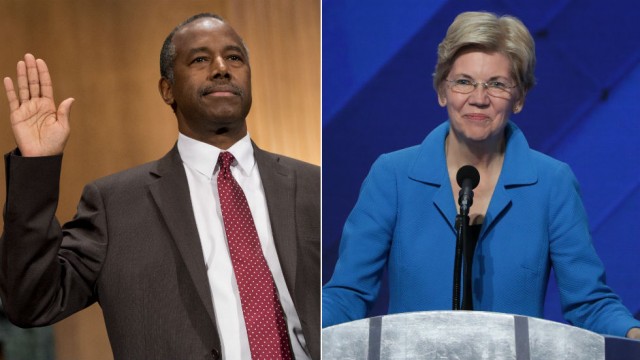 Image from The Hill

On Friday, Elizabeth Warren attended Trump’s inauguration. Along with Bernie Sanders, Warren chose not to join the 66 Democrats in Congress who refused to show up, let alone march with the thousands in the street protesting.

On Tuesday, Elizabeth Warren supported Ben Carson’s nomination as the Secretary of Housing and Urban Development. Ben Carson not only has no experience in the field of housing, he previously described the Fair Housing Act as “a failed socialist experiment.” In the 2015 Washington Times Op Ed, he argued that “these government engineered attempts to legislate racial equality create consequences that often make matters worse.”

Last week, during the confirmation hearings, Carson continued to speak out against those who seek public housing assistance. “I see each individual as human capital that can be developed to become part of the engine that drives our nation ― or, if not developed, becomes part of the load,” Carson said. He also agreed that the government provides housing for an unacceptable number of people– that is, the government provides too much housing.

This unsubstantiated claim reveals Carson’s complete disconnect from the ground realities of Americans. Rampant homelessness is a trademark of major cities in the U.S., where the homeless are often visible in public spaces and yet also made invisible through policing and incarceration practices which target vulnerable populations.

Today the Department of Housing and Urban Development sponsors some of the stingiest government programs- being poor is not enough to qualify for rental assistance. A mere 5 million American households recieve rental assiatnce.

Elizabeth Warren, who paints herself as a progressive supporter for the rights of the poor and oppressed has shown her true colors in the past few days- attending Trump’s inauguration and voting for Ben Carson as Secretary of Housing and Urban Development. Despite asking some “tough questions” during the confirmation hearings, Warren’s actual political actions have been completely contradictory, unable to even mount the smallest resistance. Rather than vetoing Carson, Warren voted for him, solidifying power for an unqualified candidate who will actively work to strip assistance from millions of housing-insecure people.