Five Takeaways from the Midterm Elections

Democrats handily took control of the House, but a few key defeats tainted the election results. The great protagonist: women of color. 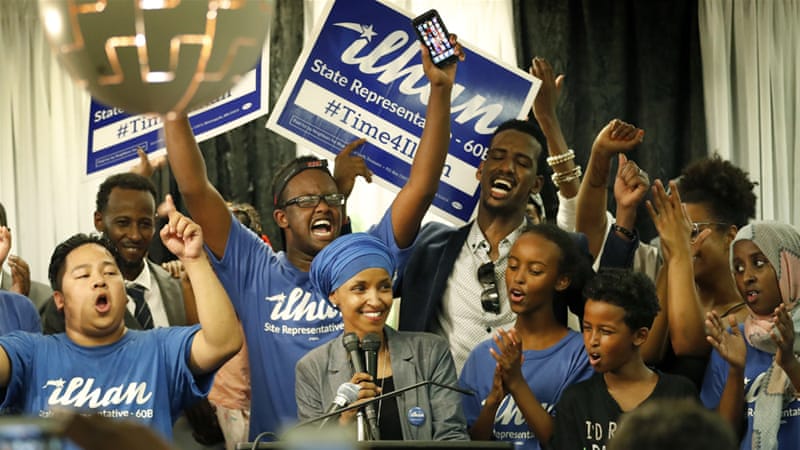 As we explained in a previous article, the midterm elections were marked by increased polarization and by racial undertones (if not blatant racist dog whistling). In the last stretch of campaigning, President Trump and Barack Obama emerged as the prominent figures in each party, trying to consolidate their bases and increase their turnout.

The preliminary results show a Democratic Party that has taken control of the House: With 219 seats secured, they managed to break the 218 benchmark that gives them a majority, and when the final votes are counted, they will have probably seized over 225 seats (an increase of more than 30). As expected, Republicans kept a majority in the Senate.

Twenty of the congressional districts that have been picked up so far by the Democrats are suburban and have an above-average proportion of college-educated people. Many of the winning Democratic candidates are women, notably in some marquee districts, such as Virginia’s 7th Congressional District, where Abigail Spanberger defeated Dave Bratt (a Republican who rose with the Tea Party, winning notoriety in the 2014 primaries when he dealt a historic upset to Eric Cantor—House majority leader at that time).

Moreover, women are among the Democratic candidates with the most progressive platforms, and they are making historic gains in women’s representation. Self-declared socialist Alexandria Ocasio-Cortez (NY 14), daughter of Puerto Ricans from Queens, will be the youngest woman ever to sit in Congress. Ayanna Pressley will be the first Black woman to represent Massachusetts’s 7th Congressional District. Rashida Tlaib from Michigan and Ilhan Omar in Minnesota have just become the first Muslim women elected to Congress. So women of color were one of the prominent actors of these elections, and they have literally changed the face(s) of the Democratic Party.

2. No Surprises in the Senate

The Senate had few surprises. Beto O’Rourke broke fundraising records in his race against (the widely abhorred) Ted Cruz, but he fell short of winning the race. It was an uphill battle in “red Texas,” where O’Rourke ran a progressive campaign. The 2% margin, however, shows an extremely tight race and seems to signal Texas’s slow transformation into a swing state.

The Democrats lost three more seats in the Senate. Heidi Heitkamp’s defeat in North Dakota was widely predicted since the moment she had to make a decision about Brett Kavanaugh’s confirmation. She supported him at first, then opposed him based on his performance in the Senate hearings. The truth is that, as incumbent senator of conservative state, she was in a double bind: Endorsing Kavanaugh’s confirmation would have lost her a great part of the Democratic and progressive base. She eventually decided to oppose him and lost the more right-wing section of her voting base, who had voted for her before based on her conservative agenda. Joe Donnelly is another example of a “blue-dog Democrat” who boasted his support for Trump’s border wall and Bush’s tax cuts, but lost the seat to Republican Mike Braun. These defeats of Democratic candidates trying tocling to their seats by showing their conservative pedigrees may be a warning for the Democratic Party establishment.

A few races for governor drew a lot of attention. Andrew Gillum and Stacey Abrams were the great “Democratic” promises of the South, both of them progressive African American candidates running to be the first Black governor in their states. In both cases, they faced more or less explicitly racist white Republicans. The campaign of Ron DeSantis, who opposed Gillum, centered on portraying the candidate as close as possible to Donald Trump, who, in turn, campaigned heavily for him.

A Democratic victory in any of these races would have dealt a huge blow to Republicans and an enormous defeat to Trump in the case of Florida. Both Gillum and Abrams lost by slim margins (although Abrams has not conceded and there might be a runoff).

Although Democrats couldn’t quite pull off these exceptional victories, they managed to pick up Republican-held gubernatorial seats in five states: Maine, Michigan, Illinois, Kansas and New Mexico. Toward midnight on election night, Tom Perez said on NBC that Democrats had picked up five state legislatures. This is not minor: District redrawing takes place following the census, so it’s important for Democrats (as it has been for Republicans) to have control of state legislatures in 2020, when the results of the next Census will come in.

There were several ballot proposals in various states. Marijuana was legalized for recreational use in Michigan, and for medical use in Missouri and Utah. A proposal to legalize weed was defeated in North Dakota. In Florida, the victory of Amendment 4 will allow over a million former felons to vote. Question 3 in Massachusetts, which asked voters to decide whether to keep trans people’s rights against discrimination in public places, won with 68% of the vote. The bad news of the day: Alabama and West Virginia voted on antiabortion ballot initiatives, and they all got over 50% of the vote. This result is troubling in itself, but it is all the more baffling in the context of the #MeToo movement and the rise of women candidates. In Oregon, however, a proposal to ban public funding for abortion was defeated.

All in all, Democrats had a good night, but it fell short of their expectations. The “blue wave” looked more like a ripple. The protagonists of the night were women, especially women of color. This may have some implications for the battle for the Democratic Party’s nominations for 2020, in which Elizabeth Warren is already a likely candidate.

On the Republican side, Trump has renewed energy and footing inside the GOP as a party leader who avoided a catastrophe in Congress. The midterms are over, the race for 2020 begins. The sluggish economy was a major factor in getting Trump elected, and the sustained growth in his first two years in office have helped the Republicans. The situation could dramatically change for 2020 if we encounter a blip or, as many economists expect, a more profound economic slowdown. The eventual gridlock in Congress will not help Trump, but it could be a powerful scapegoat for a base that only listens to Fox News. Democrats, meanwhile, also have a role to play in the coming two years. If they want to keep their base enthused and attract more young voters, they will have to deliver on some of their promises—especially putting up a real fight for a sweeping health care reform. The result of the battle inside the party between the old guard led by Nancy Pelosi and the new generation of progressive Democrats will determine to what extent they can keep a section of their voting base that is clearly to the left of their program.

Note: This article has been edited. An earlier version wrongly stated that the ban on public funding for abortion had passed in Oregon.