General Strike to Shut Down the Shutdown

As we enter the 29th day of the longest shutdown in United States’ history, Trump’s threat that he would keep the government closed for “months or even years” is hitting too close to home for over 800,000 workers. Trump’s statement–the bravado of a man who has cornered himself–is having very real lived consequences. 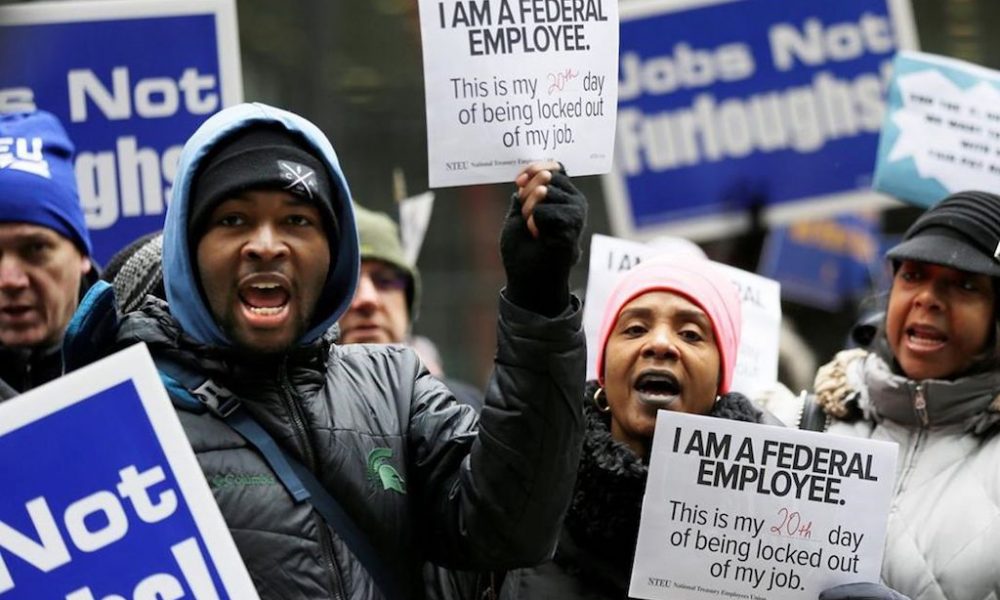 Trump’s rhetoric regarding the shutdown has borrowed language from Democrats and Leftists. He has described the border as a “humanitarian crisis” and declared that the government must go on “strike.” However, the “crisis” that Trump speaks of is not that of children still deported from families and thousands waiting to obtain refugee status, but of supposed rapists, gang members, terrorists, and drug traffickers clambering to cross the U.S.-Mexico border. The “strike” he speaks of is against Democrats’ unwillingness to fund Trump’s campaign promise of a xenophobic wall. Members of Trump’s administration have echoed the president’s characterization of the border as a “crisis,” paving the way to possibly declare a national emergency before Trump about-faced on such a declaration earlier this week.

As Trump’s administration continues to flail, Trump has little to fall back on beyond his central campaign promise: a xenophobic wall. The shutdown–of which Trump proudly took ownership–speaks directly to Trump’s dwindling base: it doesn’t seek to expand his popularity as a president, but only to keep and consolidate his narrow base, and it’s failing to do even that. Though Republican support for the border wall remains strong at 82%, only 29% of Americans think it would be “unacceptable” to reopen the government without it. Meanwhile, Trump’s approval rating has taken a hit in recent polls, even amongst groups considered his core constituency. This begs the question of how democratic is a system in which a single unpopular and bumbling leader can hold 800,000 workers and their services hostage. Though Trump’s intransigence is undoubtedly intended to demonstrate to his voters his determination to deliver, the shutdown is not currently buoying support for 2020.

The Democrats have their own political imperative. The Democrats’ #resistance to Trump’s wall has never been ideological but simply reflective of their anti-Trump electoral strategy and a balking at the exorbitant cost. Just over half of Democratic Senators voted in favor of George W. Bush’s 2006 Secure Fence Act, with notable “yes” votes including Hillary Clinton, Chuck Schumer, and Barack Obama. Though “progressives” like Nancy Pelosi voted against the act, they have in their majority been quick to remind the public that they are “tough” on border security and consider it a “high priority.” The Speaker of the House has criticized ICE, but has shied from calling for the agency’s abolition. Even those Democrats who support the abolition of ICE have framed their stance as calling for proper enforcement and improved border security. Nancy Pelosi’s bill to reopen the government provided funding for the Department of Homeland Security (which funds ICE) and was passed with bipartisan support by the House, including by newcomer Alexandria Ocasio-Cortez.

As Trump’s shutdown drags on, hundreds of thousands of federal workers remain on furlough or forced to work without pay; government contractors, often low-wage workers, face the prospect of no back-pay, reduced hours, and layoffs; the public is left without access to services deemed non-essential, including maintenance of National Parks and many of the food inspections performed by the FDA; congress members continue to be paid in full.

In the face of this attack, public unions have failed to mobilize. While the American Federation of Government Employees (AFGE) has sued the federal government, arguing that it is illegal to force workers to labor without pay, there has been no call for collective action. Workers in the TSA would enjoy immense public support if they were to go on strike. Air traffic – and with it large sections of the economy – would collapse. The Trump administration would be forced to back down within the day.

For this, rank-and-file workers needs their own forms of organization. Following the example of the Teachers’ Rebellion, they can organize on social media. This way, they can force their timid, legalistic, bureaucratic leaders to take action. This kind of strike action to shut down the Shutdown would inspire workers across the United States. It would show that the working class, simply by refusing to work, can stop Trump, his racist wall and his whole reactionary agenda. Workers would learn that they can’t trust congressional Democrats, but they can trust their own power.

Jacqueline Simon, the director of public policy for the AFGE, said that “federal employees are extremely devoted to the mission of their agencies,” and that “They believe in public service; they believe in what they do. They’re not just going to walk away.” Though airport workers work in strategic sectors and could deliver a blow to the U.S. economy, Trish Gilbert, executive vice president of the National Air Traffic Controllers Association, stated that the union “would not condone or endorse any kind of activity like a strike, walkout or another job action]” [if the shutdown continued. “We have taken an oath,” she said.

This framing by union bureaucrats is disingenuous. For federal workers to act collectively would not demonstrate a lack of devotion to their mission nor a rescinding of their oaths. It would be the quickest and surest path to an end of Trump’s shutdown; it would provide precedent to fight against the continued devaluing of labor; it would be a step towards recognizing and building working class power. Only working class power can build a world in which a one-man shutdown over a racist wall is impossible.