Hamburg in a State of Emergency

20 of the world’s biggest criminals have descended on Hamburg, Germany for the G-20 summit. But tens of thousands of protesters are throwing sand in the gears. Terrifying police violence has only strengthened activists resolve. Our reporter sends some impressions straight from Hamburg. 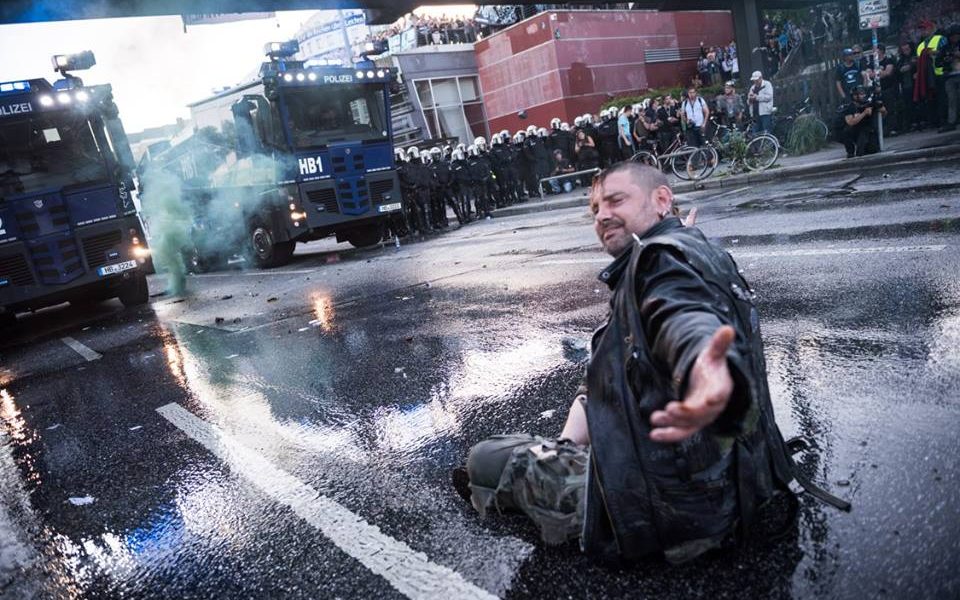 Hamburg is normally a rainy harbor city of 1.5 million people. But now it’s unlike any city I’ve ever seen. The streets are almost empty of cars. Lots of people are walking or riding bikes. Small groups of young people in black clothes place fences and rocks on the streets. Above all there are police: circling above in helicopters, mounted on horses, riding in tank-like water cannons… Every few minutes a column of police cars with blue lights and sirens shoots by. There are 20,000 police in total, many wearing black masks and carrying automatic weapons. 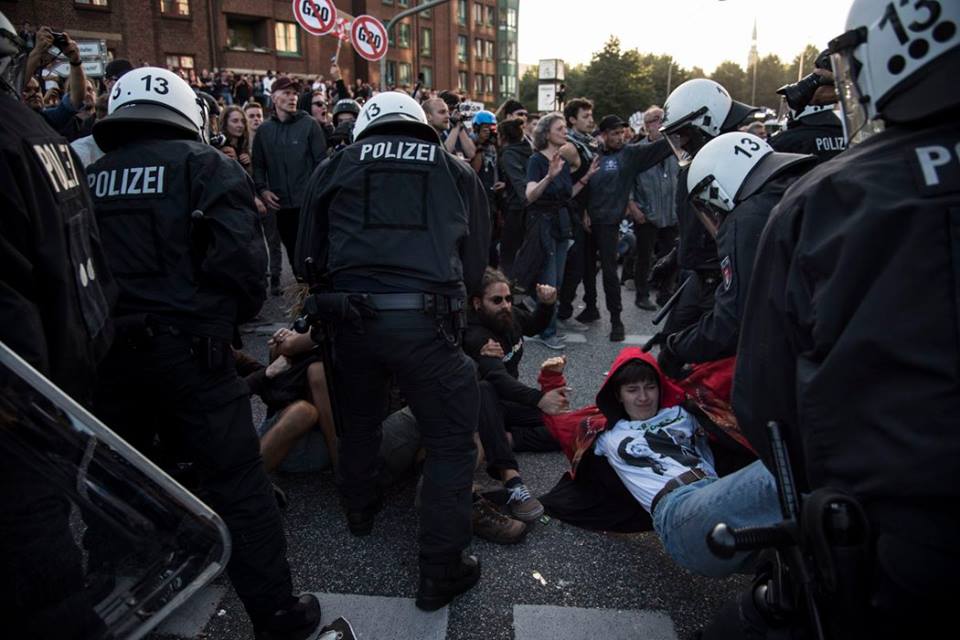 This is the G-20 summit – 20 of the world’s biggest criminals have gathered today and tomorrow in Hamburg. Tens of thousands of people have come out onto the streets already. The main demonstration will be on Saturday, where up to 100,000 people are expected. Before 6am on Friday, demonstrators were treading through the woods to enter the “blue zone” where the Hamburg police have prohibited any demonstrations and suspended basic democratic rights.

Activists were able to break through and (at least for short periods) block the roads that the capitalist politicians needed to get to their convention center. Reports say that Melania Trump was stuck in her hotel, while her husband was forced to take an alternative route. German finance minister Wolfgang Schäuble had to cancel a meeting. But the price for these successful blockades was high. Dozens of protesters have been seriously injured. Hamburg’s hospitals are on high alert. At least one is in a coma. And everywhere are people with bruises and red eyes from pepper spray. 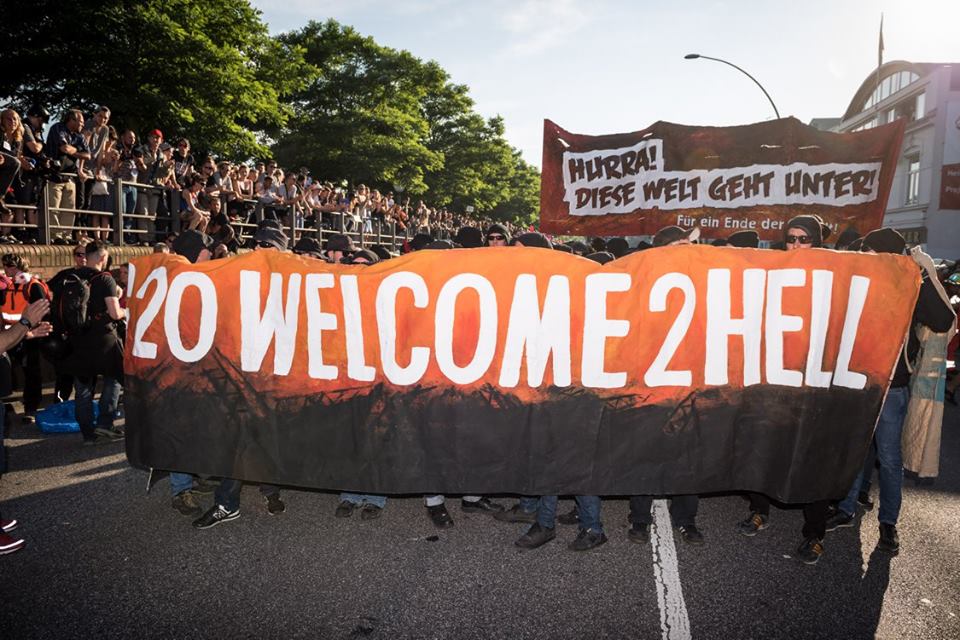 On Thursday evening, the “Welcome to Hell” demonstration wasn’t even allowed to start. The police attacked the 10,000 demonstrators before they took a step. And while they’ve been trying to project an image of “dangerous hooligans”, even state media have been reported that police are responsible for the violence. As a result, the Hamburg population is expressing growing solidarity. Every day, more people are offering apartments to stay in or gardens for pitching a tent.

Friday morning saw a school strike with up to 3,000 people demonstrating through the empty inner city. Many weren’t allowed to go to school anyway, if their schools are in the so-called “danger zone”. Others left their class rooms to protest against the capitalist world order, but also against an education system that trains them to be future wage slaves. “All of Hamburg hates the police!” was a slogan they chanted again and again. 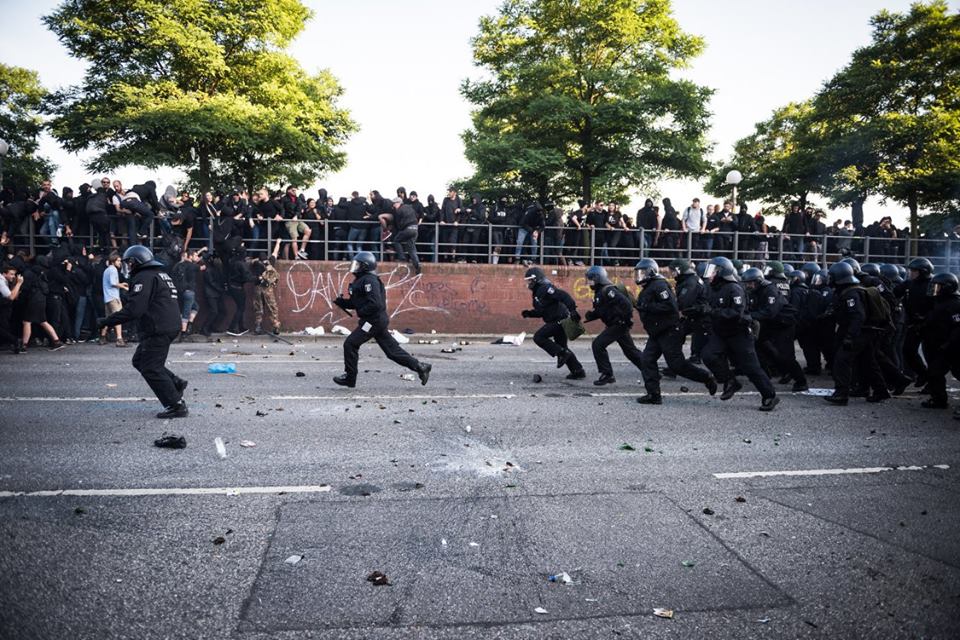 Friday night saw further escalations. Demonstrators were able to get close to the Elbphilharmonie concert hall, where Angela Merkel and her friends were watching a concert. The Hamburg police sent an emergency request for additional forces – on top of the 20,000 already here! Army tanks were sighted in the city. At least one police officer fired his pistol into the air. 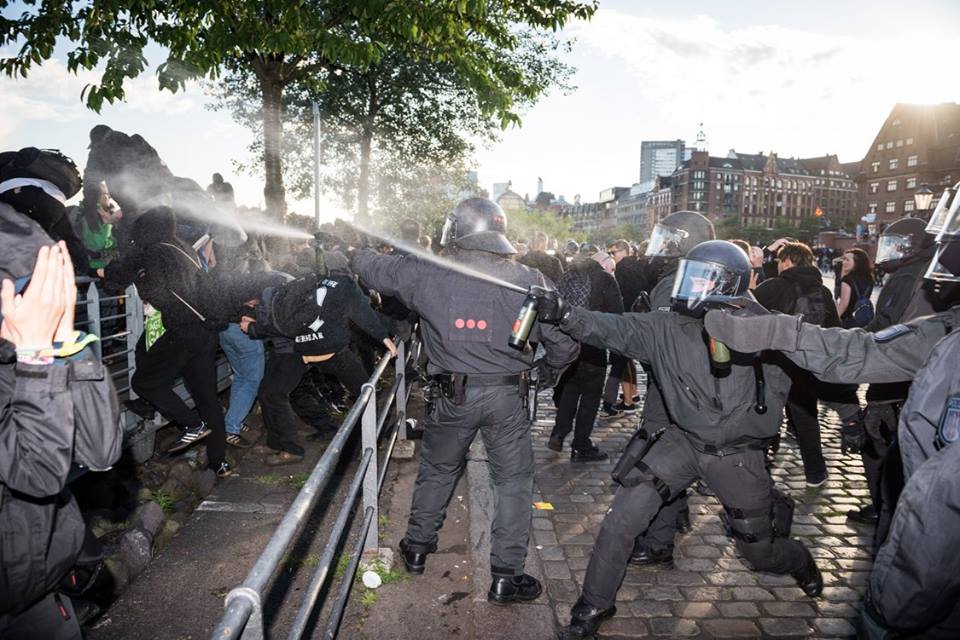 Even the conservative bourgeois media is using strong words to describe these incredible scenes: This is “like a civil war” or a “counter-insurgency exercise”. Constitutional rights are being denied on a massive scale. And there is still almost 24 hours of G20 summit left. The Hamburg government, by the way, is a coalition of the Social Democrats (SPD) and the Greens. At least this is nothing new for them. Way back in 1923, the Hamburg proletariat attempted an insurrection against capitalism. Who was responsible back then for beating them down and saving the system? Right, the SPD.