Now that Trump’s first SOTU address has come and gone, we’ve hit a milestone for reflection on the ways that mobilization has and hasn’t happened. 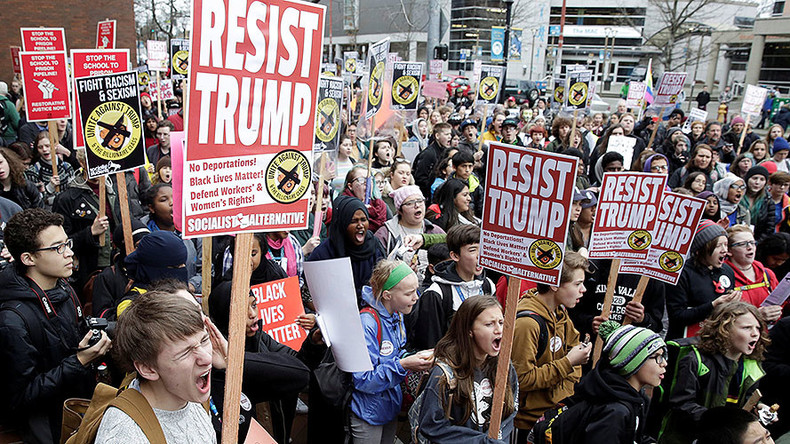 Now that Trump’s first SOTU address has come and gone, we’ve hit a milestone for reflection on the ways that mobilization has and hasn’t happened. Trump and his cronies have already done their best to roll back any progressive reforms that have been made in recent times. They’ve pushed for legislations that will continue to draw wealth and agency from the working class and minority groups. These have included his motion to end DACA, the passage of a new tax bill that includes major cuts for billionaires, his efforts to replace Obamacare with a grotesque Republican variation on healthcare, and much more.

No doubt, in his words and in his actions, in the legislation he supports and in that which he opposes, in the people he praises and the ones he degrades, Trump offers us a look at the US government in its rawest most authentic form, unmasked by rhetoric and genteel performative progressivism. As a result, we are at a unique moment to begin raising questions about the role and nature of the state. We’ve also reached an unprecedented juncture where the conditions exist for inciting real structural change.

It is undeniable that there has been an upsurge in the number of people turning out for demonstrations and engaging politically. The events themselves have also reverberated in important ways as they’ve raised discussion, critique, and awareness in their wakes.

J20: Resisting repression of our right to assembly

Demonstrations on Inauguration Day helped shift the focus away from Trump’s victory towards the fact that it was met with heavy opposition in the hundreds of thousands of activists that assembled in Washington DC that day. Two hundred protestors were arrested for acts of property damage in the capital committed by only a handful of individuals. Critics of this form of group arrest, known as kettling, assert that it infringes on people’s ability to assemble in protest, a right protected under the first amendment.

A year later, thanks to the persistent efforts of the defendants, organizers, and civil rights lawyers, six of the J20 protestors were acquitted. Though the struggle continues for the rest, this is an important victory. “‘The acquittal is a vindication of the defendants’ decision to fight the charges as a group and refuse to submit to pleas, which by acknowledging guilt, undermine the message that these charges were politically motivated and unjust from the start,” Menefee-Libey, one of the J20 told reporters in an interview. “This is what solidarity, perseverance, showing up for one another, bravery, and collective legal defense get us.”’

Turnout for the Women’s March of 2017 reached record numbers, which collectively climbed into the millions in cities across the US. Moreover, its scope has been worldwide, with thousands more marching in unison around the globe from Berlin to Belgrade to Nairobi and Kolkata. This illustrates a clear interest in opposing the sexism and patriarchy that Donald Trump represents where women and their allies came together en masse as political subjects who demand to be seen and heard. The demonstration had its second edition in January of 2018, and turnout continued to break records in many cities.

The demonstration also garnered apt critiques, and for many members of the left it’s easy to receive this protest with cynicism. No doubt, the face of the Women’s March may seem to be that of self-congratulatory white feminists who aren’t doing enough to concern themselves with structural issues, but it’s also important we don’t throw the baby out with the bath water. Beyond the pink hats and signs reading “I’m with Her,” there were also women turning out to demand labor rights and stronger unions, immigrant women, black women, and members of the LGBTQ community among the crowds.

Furthermore, the criticisms that these marches have raised can also serve as an important, constructive force and the basis from which we can discuss the deeper systemic issues at play beyond the Trump administration and the regressive Republican Party more broadly. Critiques of the Women’s March largely called into question the propensity of mainstream white feminism to exclude intersectionality. Many activists brought the causes of trans women, women of color, poor women, and women living in other countries suffering under US imperialism to light. In terms of the latter, the global scope of the Women’s March can also help us to consider the importance of making coordinated international efforts as we organize and mobilize. 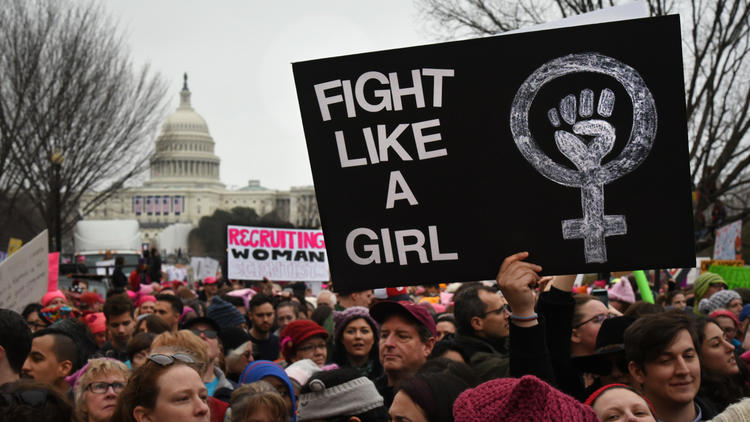 One of Trump’s campaign promises was to ban the entry of people from so-called Muslim countries into the US. This was amongst his anti-Muslim campaign promises, which bear eerie resemblance to the Nuremberg Laws. Another of which includes making a database of all Muslims residing in the US. Even though the travel ban took effect at the beginning of last year, it was also met with marked resistance. Thousands occupied airports in major US cities including JFK, Dulles, LAX, and Dallas. Moreover, federal courts have shot down all three versions of the ban, and it’s now on its way to the Supreme Court.

More broadly, the American Civil Liberties Union has raised record donations since Trump’s election, and this demonstrates a heightened interest in defending people’s rights, which are particularly under threat for minorities thanks to the current political administration. While the ACLU is certainly not perfect as an institute that operates within our defunct and oppressive legal system, it remains a significant force in fighting many abuses against society’s vulnerable members. It has taken issue with ICE, and it sued the Trump administration over the repeal of DACA. The ACLU has also resisted the Republican ACA bill, and taken stands for racial justice as well as defending title IX and LGBTQ rights. It has also demonstrated its commitment to helping organize direct action and grassroots efforts at the community level. The fact that the ACLU has seen such a surge of contributions and support—with $24 million raised in 2017, six times that of 2015—tells as something about where the public is aligning its values.

Another impact of Trump’s presidency is that it has helped legitimize and propagate white supremacy, misogyny, and other forms of bigotry amongst his supporters. In fact, last year, the number of hate crimes and murders committed by rightwing extremists has also compounded itself. Perhaps the most disturbing public gathering of these bigots came on August 12th at the Charlottesville ‘Unite the Right’ rally, the largest of its kind in many decades. This turned violent when a demonstrator drove a vehicle into a crowd of counter protesters injuring 19 and killing one, Heather Heyer.

The following week, counter-protesters mobilized in a powerful response to ‘Free Speech Rallies’ that were planned by emboldened members of the alt-right. The opposition arrived in the tens of thousands in multiple cities, outnumbering the alt-right in Boston 15,000 to 50.

Hope for a socialist future: the rise of the DSA

While there is certainly a sense of amnesia in the US regarding the history and persistence of leftist struggle against the bourgeoisie led capitalist state. Even discussions about the viability of socialism are beginning to lose their taboo. Under the weight of attempting to survive the conditions of scarcity and instability ushered in by decades of neoliberal policy and exacerbated since the 2008 recession, increasing numbers of people are beginning to explore alternatives to capitalism in earnest.

This began before Trump’s election when political underdog Bernie Sanders gained substantial headway in the Democratic primaries. In 2017, raised interest in socialist ideas was most clearly evident in the numbers that have joined the DSA where membership more than doubled since Trump’s inauguration. Not to mention, at the end of last year in the diverse array of candidates who ran on successful campaigns on progressive platforms as members of or endorsed by the DSA.

The need for strategic action

In light of the acts of resistance discussed here, for many in the US there remains a need to dig past topical issues in order to examine the system that propagates the existence of racism, sexism, xenophobia, the rise of the alt-right, and neoliberalism in the first place. Yet, based on the numbers of people that are turning out and the organizations in place to capture some of this momentum, such as the DSA, the raw materials are there. Coupled with the right strategy, we’ve reached a time where major social shifts are more possible than they have been in recent memory.

The people are demoralized under neoliberal policy, and even many of those who voted for Trump did so because they were tired of establishment politics. While this choice was bigoted and terribly misguided, all signs are pointing to the fact that people are looking for change beyond that which has been offered them by the bipartisan establishment. Such continues to be evident now as Trump, has only continued to enact neoliberal policy that degrades and demoralizes the masses, funneling what wealth remains in the hands of the working class into the one percent. He also has the lowest approval ratings of any president in his first year.

We have reached an important point where, with the right strategy, we can begin to make larger strides towards deeper structural change. This means maintaining sight of the fact that the struggle is not against Trump alone or even the Republican Party, but electoral politics and the entire corporate capitalist political system itself. In situating these struggles against something more than just the buffoon in the White House, we can use all that is happening as a jumping off point for discussing the failings of our current system.

Naomi Klein echoes this sentiment in her article, “It was the Democrats’ embrace of neoliberalism that won it for Trump, when she asserts, “Neo-fascist responses to rampant insecurity and inequality are not going to go away. But what we know from the 1930s is that what it takes to do battle with fascism is a real left. A good chunk of Trump’s support could be peeled away if there were a genuine redistributive agenda on the table.”

Instead of merely coming out in pink hats or showing up in opposition against the Alt-Right when they take to the streets with their tiki torches, we can organize against the capitalist system as a whole which propagates racism, sexism, xenophobia, imperialism, and exploitation in the first place. We can begin to raise awareness of the fact that substantive social change will only come through the upheaval of the existing imperialist, capitalist, kleptocratic state. More people are open to these ideas than they have been in decades, and a strategic leftist movement that elucidates the connections between different forms of oppression under the current system has a greater chance of being heard and effectively mobilizing the masses.

Indeed, a strong left should advocate for the rights of the most marginalized in society while also fighting to dismantle the capitalist system. This will never come from appealing to our current political regime, and Trump’s first year in office is making that clearer than ever.