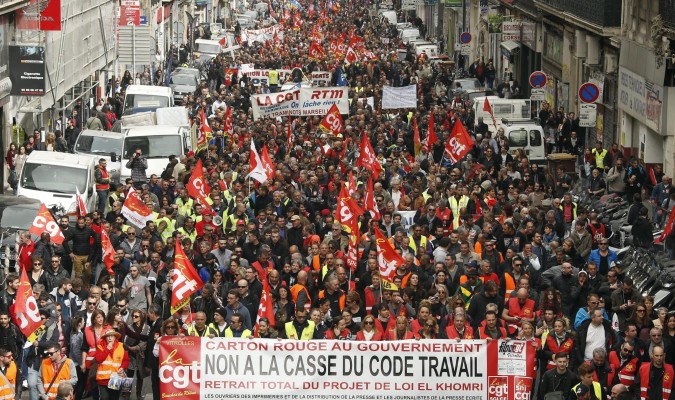 Over 400,000 workers took part in the general strike on Tuesday, with over 180 mobilizations throughout the country, including large concentrations in Marseille and the major cities, to march against President Emmanuel Macron’s unpopular labor reforms unveiled at the end of August.

The day of protests criticized labor market flexibility, one of the primary reforms promoted by Macron. The strike caused flight delays and cancellations from many “low cost” airline companies, whose employees were on strike; Ryanair in particular, but also Easyjet, Vueling, and Volotea, canceled a dozen flights.

Railroads were impacted, with cancellations predominantly along regional lines and nearby Paris. The strike disrupted metropolitan transportation systems in several cities as well.

In addition to the stoppages in transport, the ports of Le Havre, which were transformed into a symbol of struggle during the protests in 2016 against the reforms of François Hollande, were also part of the strike. In Le Havre, some 10,000 protesters headed by the dockworkers were mobilized.

Chemical, postal, and telecommunications workers were also among the unions that turned up at the strike, including the Confederation Union of the Retirees of the CGT (General Confederation of Labour).

In Lyon, the police launched tear gas and repressed protesters who concentrated against the labor reforms.

In spite of Macron’s obvious attacks on labor rights, other large unions such as the CFGT, and the Force Ouvrière (FO), were not brought into the strike, which was launched by the CGT. The rank-and-file base of these other unions, however, participated despite their union leadership’s reluctance to endorse. For example, more than 50 local sections of the FO syndicate, including railway workers, chemical workers, transport and energy workers, among others, turned up at the strike, revealing that the spirit of the struggle of 2016 persists. In Rennes alone, there were more than 24 mobilizations.

This general strike occurred in tandem with a dramatic decline in Macron’s popularity, which dropped 60 percent in the last three months–a decline from which he still has not recovered. The massive turnout for the general strike and the public’s disapproval of Macron has increased the tension and narrowed the margins of action of the government, which should be prepared for a new round. Meanwhile, a new strike has been called by the CGT for September 21, the eve of the proceedings of the reform.