McDonald’s all over the country closed due to #DayWithoutImmigrants protests 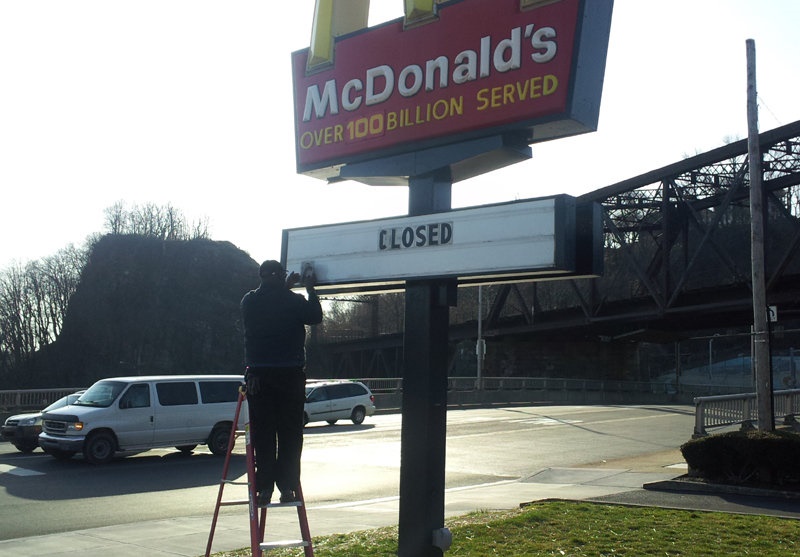 McDonald’s is known for its horrendous labor practices and hyper-exploitation of their underpaid workers. The fast food chain is also known for its poisonous food that contributes significantly to health problems like cardiovascular disease and obesity. Around the world, McDonald’s is a sign of American imperialism, representing cheap labor and massive profits for American capitalists.

At the same time, McDonald’s is the place to get a late night snack when nothing else is open or to grab a quick meal during the day. And for many working-class people, including low-income people living in food deserts across the country, McDonald’s is a staple food. McDonald’s feeds 68 million people per day, which is roughly 1% percent of the world’s population.

On Thursday, McDonald’s restaurants across the United States were closed because immigrants refused to go to work.

Thursday was the #DayWithoutImmigrants protest, which shut down restaurants across the country. This was an effect of the nationwide movement against Trump which rejects Trump’s plans for a Muslim ban, his plans for a border wall, and the ICE raids against undocumented people in cities across the US. Even though the Democratic Party says that it supports immigrants’ rights, they ordered and oversaw millions of deportations and detentions. Obama, in particular, deported more undocumented immigrants than any other President.

#DayWithoutImmigrants encouraged foreign-born workers to stay home from work, students to stay home from school, and members of both groups to refuse to purchase items in order to demonstrate the weight of immigrants in the US. One of the most affected companies was McDonald’s.

“I was going to stop at McDonald’s for breakfast, but it’s closed,” one Facebook user from New Jersey wrote. “I hear it’s closed because this is the day immigrants are taking off as protest to Trump’s immigration law. I was annoyed at first until I realized why it was closed. Now I’m in full support of anything that goes against Trump and his ilk.”

#DayWithoutImmigrants Glad to see all these businesses closed. I stand in solidarity. This is Lake Creek @McDonalds in Austin pic.twitter.com/Qk61vGF6wD

Due to work shortages, some McDonald’s restaurants were only able to open their drive-through windows.

McDonald's in Green Hills only taking orders in drive-thru due to shortage of workers who are participating in #DayWithoutImmigrants pic.twitter.com/nbRIsws6Sv

According to CNBC, McDonald’s quarter sales may be affected by these closures. In 2016, the quarter sales were higher because of the additional day on February 29 and a rise in sales last year due to value deals. However, it is unlikely that these protests will have a significant impact on McDonald’s 24 billion dollar sales revenue, which is so astronomical that, If McDonald’s were a country, its revenue would rank in [the
world’s top 100 economies->http://www.thefiscaltimes.com/Articles/2012/04/30/13-Disturbing-Facts-About-McDonalds].

The #DayWithoutImmigrants protests demonstrate the strength of the immigrants as part of the working class to confront multi-national conglomerates like McDonald’s. They demonstrate that when workers unite, we can disrupt and halt the growth of capitalist profit. The #DayWithoutImmigrants protests also show that workers are a powerful force, a force we should trust. We cannot place any trust in the Democratic Party with its record of millions of deportations; we can only trust our own strength as workers. Today’s protests show us the way forward in resisting Trump’s deportations, resisting the Democrats’ deportations, fighting for immigrants’ rights and a world without borders.