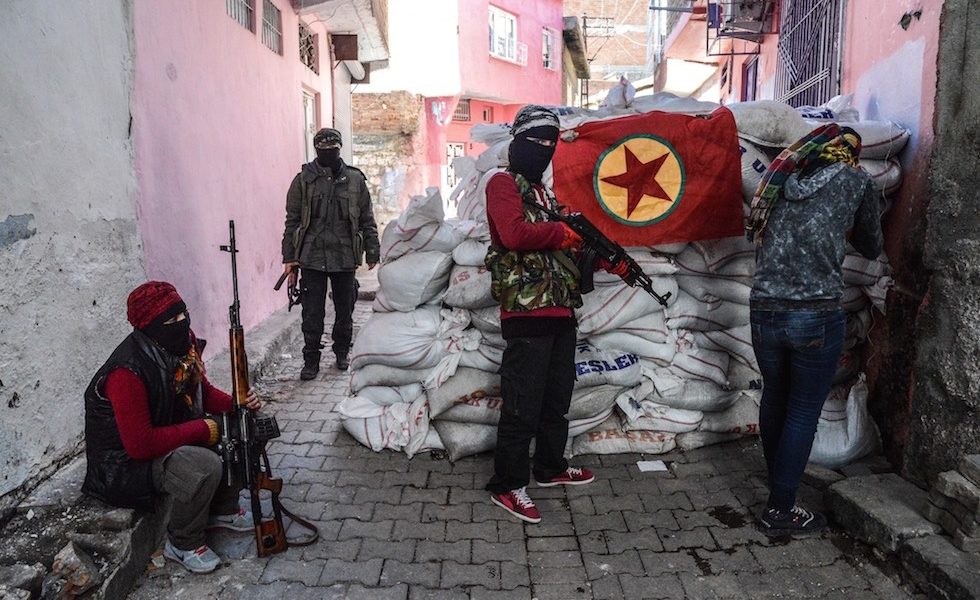 This is a translation of an article originally published in Klasse Gegen Glasse.

“Neighborhood by neighborhood, house by house, street by street, the PKK will be fought and cleansed,” said Turkish Prime Minister Ahmet Davutoğlu: an open declaration of war.

In Farqîn, Girge Amo, Nisebîn, Cizîre, Sûr, and Kerboran, the Kurdish youth has been fighting militantly against the military offensive for months. With tanks, combat helicopters, and ten thousand Special Forces from the police and army, the Turkish state brutally attacks the Kurdish people. Since July 7, 2015 – the election day when, at the time, Erdogan’s AKP could not form a government – in 18 cities and districts a state of emergency has been proclaimed 54 times and for 175 days. In those areas most heavily affected by the war, not only electricity and water supplies, but also telephone lines and internet connections have been interrupted. The Turkish state purposefully targets Kurdish civilians in order to weaken the support for the Kurdish movement. Many houses have been cleared by force. Public institutions as well have been bombed to pieces. Furthermore, the Turkish state has withdrawn about 3000 teachers and closed the schools. The Turkish Special Forces use the school buildings as military outposts. Snipers occupy the roofs. People are ordered to vacate the region as soon as possible. Under these conditions tens of thousands are fleeing. Hundreds of people, among them civilians, were murdered during the last months. The numbers are increasing.

The high-ranking leader of the Kurdistan Workers’ Party (PKK) Murat Karayilan described the current situation as a civil war.

The Kurdish question on a new stage

Erdogan’s reaction to the upswing of the Kurdish movement – especially in the Turkish parliament and in Kobani – was an aggressive, nationalist militarization. The bomb attacks in Suruç marked a turning point in this respect. In many Kurdish cities a resistance has formed.

The PKK’s youth organization Komalên Ciwan called for an insurrection (Serhildan) on June 27, 2015. The umbrella organization of the Kurdish movement, Group of Communities in Kurdistan (KCK), declared on August 12, 2015, that the Kurdish people had no other option than self-government – independent from the institutions of the Turkish state. The Democratic Regions Party (DBP), the biggest current within the Peoples’ Democratic Party (HDP), proclaimed self-government in several Kurdish cities. All Turkish officials would have lost their legitimacy.

“From now on, we will be guided by the principle of self-government and build our life on a democratic foundation. When attacked, we will make use of our democratic right of self-defense.”

The “peoples’ parliaments” in the Kurdish region would be the actual administrative bodies. The answer from the Turkish government to this proclamation was the arrest of dozens of local Kurdish politicians, among them several mayors.

The aggressive military policy of the Turkish state against the Kurdish movement during the 1990s was based on depopulation by setting villages on fires. The goal was to deprive the PKK of its material and political support. Now this tactic has been transferred onto the Kurdish cities. It is thanks to the heroic resistance of the Kurdish youth that until today the Turkish state has not been able to establish full control over several cities. The Patriotic Revolutionary Youth Movement (YDG-H), which fights at the forefront of the resistance, has taken over multiple urban areas in this process. They built trenches and barricades to win liberated zones, autonomous from the Turkish police, Special Forces, or officials, in their communities. The trenches serve as tactics of self-defense to fortify the proclaimed self-government.

The HDP faces a dead end

The notion of self-government was also contained within the ten points, which were the basis for negotiations with the Turkish state. This “ten point plan” covers essentially the governmental recognition of the Kurdish nation and language, a general amnesty to allow for the political participation of Kurdish fighters, the legal transformation of the centralized nation state through autonomous regions and democratic rights for minorities and women, as well as the right to education in one’s native language.

The “self-government” in Kurdistan is to be reached in accordance with the “European Charter of Local Self-Government”, which is an integral part of imperialist democracy. Especially the Kurdish movement fuels the illusion that the European Union (EU) has a democratic mission in Turkey. The irony in this is easily revealed with a handful of examples: the EU currently lists The PKK as a terrorist organization. The Turkish state, which brutally murders Kurds today, has only recently made a deal with the EU in order to keep refugees from fleeing to EU countries. Turkey is in turn rewarded financially and militarily through arms shipments. This is where the budget for the war in Northern Kurdistan originates!

The bodies of self-government, which don’t question the capitalist state, offer no solution to the occupation. In contrast, self-government against the state of emergency can only be established with a social program and through its’ extension to other parts of Kurdistan and Turkey. The resistance can only hold its ground if social questions are addressed in order to win the support of the workers in Turkey. Demands like free water, free local transport, land reforms under the control of farmers, public housing under workers’ control, halting privatizations, re-nationalization of privatized plants under workers’ control, end of impunity for military and police, withdrawal of the Turkish military and police from Kurdistan – all those demands could give the bodies of self-government a lot of power. With such a policy the resistance in Kurdistan can convince millions of workers and the impoverished in Turkey of their politics and win them over.

Establishing an anti-war movement in Turkey

In Turkey today, the founding of an anti-war movement is an urgent task to put an end to the savagery of war. The labor unions DİSK, KESK, TMMOB, and TTB are planning a countrywide strike in December 29, 2015. Their slogan is: “We will defend peace against war”. The sporadic one-day strikes that have taken place so far have been ineffective at putting Erdogan under pressure. In light of the racist atmosphere fueled by the Turkish bourgeoisie, rallying cries for peace will ricochet from the shields of the police and be drowned in tear gas and bombs. Against this, the labor unions have to organize an indefinite general strike with social demands, which paralyzes the daily routine of a capitalist country. Those who want to prevent Turkey from going to war today have to take an anti-capitalist path and begin immediately to take steps towards anti-capitalist measures in the Kurdish strongholds.

There are millions of people in Turkey who constantly worry about food and rent. These people can only be convinced when bodies of self-government overcome these worries. The military defense against the Turkish state is necessary, but not enough in this respect. The slogan towards the masses can only be:

“Where there is self-government, there is bread, work, and housing for all. To achieve this in Turkey, too, let us fight together. This is the sole basis for peace.”

Our solidarity is with the Kurdish resistance against the oppression by the Turkish state.

Suphi is an editor of our German sister site Klasse Gegen Klasse.