Miski Noor is one of the founders of the Black Lives Matter-Minneapolis chapter, which has been at the forefront of protests that broke out when city police executed Jamar Clark in mid-November. An African immigrant and long-time Minneapolis resident, Noor speaks with Left Voice about the BLM values and vision for change, her group’s run-ins with police and elected officials, and next steps for the Minneapolis chapter. 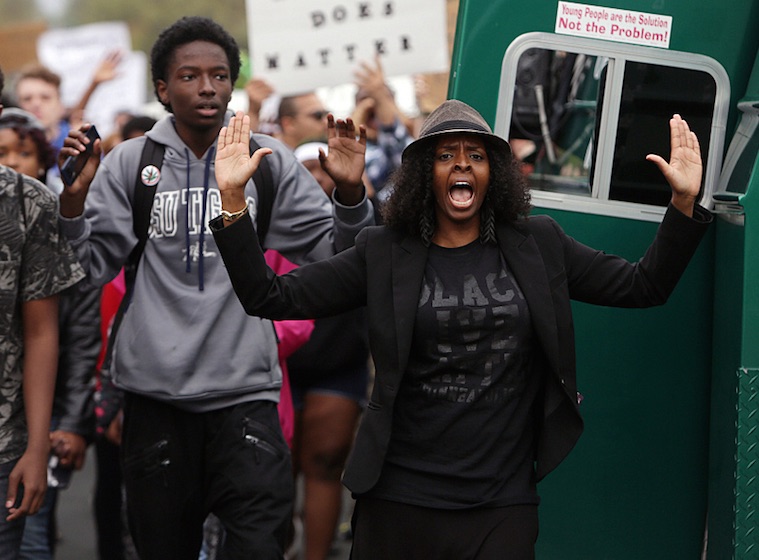 Photo: Noor at a protest last May (Yourclassical ).

Tell us about yourself

My name is Miski Noor. I’m one the organizers of BLM-Minneapolis.
I worked for Congressman Keith Ellison (DFL – MN) for three years on foreign affairs, immigration, and outreach to the Muslim community. But I ended up being burnt out and took a break, asking, “How am I building power and who am I building power for?” I felt my work wasn’t fulfilling me in ways I wanted it to.

Last year, I ran for my neighborhood association and won, and then BLM popped up. With the non-indictment of Darren Wilson, it was go time. I thought then, I can do this. I can risk my livelihood and work because it’s fulfilling. Fighting for black liberation – I can’t get tired of that – and eventually, all our liberation. We are all fighting for black liberation now. We’re doing it together. When we come together, we are super powerful, and push out the work that needs to be pushed out.

After leaving Congressman Ellison’s office, you are now going head-to-head with some of the local officials and Ellison himself. What has that been like?

Initially, Ellison was kind of supporting us, but then he decided he didn’t want to anymore. At the same time, Mayor Hodges rounded up some old guard – retired black activists— she basically went out and found a bunch of black faces to stand behind her during her press conference, when she said that the occupation should end. Ellison was one of the people who went along with it.

What is your group focusing on now?

We are focusing on 1) ending the extrajudicial killing of black people and 2) to restore power and wealth to black communities across a myriad of issues. This has a special meaning in Minneapolis, where our mayor likes to use the phrase, “One Minneapolis” and people say that it’s a great place to live. But the ugly truth is that this is true only if you’re white. Minneapolis has some of the worst disparities in the country, period. Yes, it’s a great place to live, except if you’re a black or brown person. For example, the poverty rate has grown 5 percent and the median income has dropped 14 percent.

Tell me about how Justice for Jamar has developed over the last few weeks.

Jamar Clark was murdered by the police on November 15, and less than 24 hours later, we were in the streets. With the occupation, there were about 20 people, mostly women, mostly queer folks. We said, “Yup, we’re not leaving until you give us the tapes,” and were still there 18 days later. On day 2, we had simultaneous actions: we held the occupation and took over the highway, then had a march back to the precinct.

Within 5 days, we had two of our three major demands met: 1) the start of an independent investigation by the Department of Justice and 2) the release of the police officers’ names. The main win was the creation of community space. Going to the occupation every day was incredible: all you saw was people taking care of each other. It’s exactly what capitalism doesn’t want. There was so much incredible energy and abundance. I think of it as a payback from the ancestors, since the space that the police precinct now occupies today actually used to be a community center called “The Way” for black revolutionary love.

Where do you see things going, since the occupation was cleared?

The occupation ended, but Justice4Jamar doesn’t end. We want justice for all the unarmed black people who have been murdered at the hands of the police. The occupation is not the only way to fight. Activism looks like a lot of things.

What are you guys specifically fighting for?

We are saying NO to a Grand Jury. We know that grand juries serve justice only 3 percent of the time a cop is involved with a shooting of a person of color. So 90 percent of grand juries end up in the police walking away scot-free.

We’re pursuing a special prosecutor for these cases. We want reparation for the victims, families, communities affected by police violence. There are ways that the violence continues beyond the violence of the murder: Trauma in our communities, memories, and in our bodies.

Governor Dayton has shown support for what we are doing. He is starting an investigation into abuse that the protesters faced (a woman was punched in the face, another woman dragged by her hijab, all this stuff that has happened during the protests – he called for investigation). He has proposed that the NOC & BLM develop an agenda, a special session of the Minnesota legislature to look into the racial disparities, working with NOC and BLM Minneapolis. To create a “black agenda” to address why black people are lagging behind

During the Baltimore uprising, Maryland Governor Hogan established a state of emergency and called in the National Guard, which led to severe repression and arrest of hundreds. How do you know Governor Dayton won’t turn around and use the same instruments against you?

Don’t get me wrong, we don’t trust them to not to repress. We don’t trust any of them. They are all complicit. The reason Governor Dayton was more open to hearing us and didn’t react the way Governor Hogan did was because of what happened with the mayor:

The Wednesday morning after Jamar was killed, we (BLM-Minneapolis) sat down with Jamar Clark’s family, and Mayor Hodges. The family made clear what they wanted: release of the tapes. She said she would not publicly call for the tapes to be released. At that point, we said the meeting was over and told her she could leave. A little later, we got a call saying the encampment at the police precinct was getting raided. That turned into a 12-hour stand-off, when all the incidents happened:

Police officers stuck a gun in Congressman Keith Ellison’s son’s face when he had his hands up. A young high school black woman was grabbed by her hijab. Another black woman was punched in the face. All this was caught on camera – all this racist behavior. After the meeting, Mayor Hodges, had called her guard dogs on us. People saw that in the news. I’m sure that’s the reason why the Governor doesn’t want to go down the same road as Mayor Hodges. Then, two days later, we were attacked by white supremacists.

This entire system is guilty. They are all complicit. We are not reformists. We are here to dismantle it and build a system that does work for people of color.

How do you envision dismantling the system and creating a new one for all people of color, all oppressed people?

Our movement is intersectional. For us, as BLM, we are pursuing black liberation. We are pursing a world where whole and healthy black lives can exist and thrive, but with the knowledge that our liberation is all tied together. In the work we do, we center the voices of those that are most marginalized.

Queer, trans, gender-non-conforming people. These are the people who sit at the intersection of those systems of oppression. We place them at the center of our movement. We are centering the voices of those who are affected by all these systems of oppression: if they get free, we all get free. When we make our decisions, it’s black people making decisions.

What is the relationship with the BLM national network? What kind of communication happens between chapters, and how are you connected with the “national”?

We are the chapter that’s affiliated with the BLM National. It’s a decentralized movement. All these chapters started popping up. We had to figure out if all these people calling themselves were actually BLM. So they came up with some guiding principles : who we are, what our values are, how we are pursuing black liberation, where our analysis comes from.

We’re a network connecting black organizers across the country. Now, we’re up to 32 chapters nationally and internationally and BLM-Minneapolis is one of the official chapters. National doesn’t come in and make any decisions for us; we make the decisions on the ground because we are the ones here, and we can call the national when we need support.

Of the guiding principles, which ones are most important for you?

This is about ALL black lives. That is what resonates most for me. BLM does not play around with respectability politics – the “respectable negro” thing, that leads you to believe that some black lives are okay: if you speak a certain way, pull your pants up, if you do what’s expected by society, then you’ll be okay. No, that’s not true. We know that you’re just another black life that can be taken. And the fact that we are saying, “Trans lives matter,” “Queer lives matter” – that was missing from the black liberation movement of the past.

There’s a false narrative of “the hood” vs. queer. We are breaking down the barriers, regardless of if you’re a sex worker – that’s not an excuse to dehumanize you – or if you’re African American working in corporate America with natural hair.

What are the next steps for you and your group?

This network is building and growing. BLM was formed two years ago. Now we are getting infrastructure in place and we’re going international. A year from now, I want us to have a much more global analysis, through these relationships and intentional conversations.

As far as BLM-Minneapolis, I think we are going to be doing more work around the release the tapes and the creation of a special prosecutor. This occupation really politicized a lot of people – especially black women – this movement is on the backs of gender-non-conforming (GNC), queer, black women. A lot of black women came out for this occupation. We are planning on having a membership meeting this month. The occupation made people go full-in with BLM-Minneapolis. We are going to be working on building black leadership.

Click here for more articles by Left Voice on the fight against police brutality. Share your photos, videos, and comments with us: [email protected]