Lula in Jail: What You Need to Know

Luiz Inácio Lula da Silva, former Brazilian President, turned himself in on Saturday to begin a 12-year jail sentence in response to a corruption conviction from July 2017. 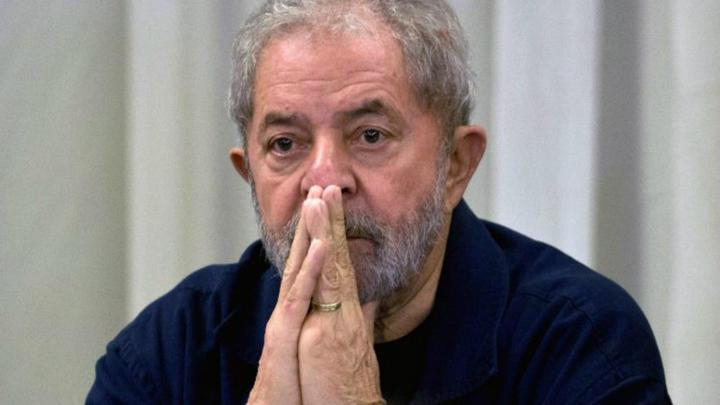 Luiz Inácio Lula da Silva, former Brazilian President, turned himself in on Saturday to begin a 12-year jail sentence in response to a corruption conviction from July 2017. After ten hours of debate, the Supreme Court denied his request to remain free pending the exhaustion of all his appeals by one vote—six to five.This can only be seen as a continuation of the “institutional coup” begun August 2016 that ousted the Workers Party President Dilma Rousseff.

The case against Lula is part of the “Car Wash” corruption investigation, which has jailed dozens of top executives and politicians, and exposed bitter, deep divides in the country. And while he is still leading in polls, Lula is now banned from running for office in the upcoming general elections this year.

Brazil is undergoing increased political and social polarization since the institutional coup against Lula’s successor, Dilma Rousseff. Three weeks ago, against the backdrop of a militarized Rio de Janeiro, city councilwoman and member of the Party of Socialism and Freedom (PSOL) Marielle Franco was murdered by the police. Just a few days ago, Lula’s bus caravan received four gunshots when traveling in Parana.

Although Lula’s involvement in a corruption scheme is by no means out of the question, the speed at which the process against him has advanced is extraordinary. Several other politicians directly involved in the “Car Wash” scandal have received far less draconian treatment. Renan Calheiros was President of the Senate of Brazil when he was ordered by the supreme court to step down because of charges of embezzlement. He and the Senate refused to abide, and the supreme court backtracked, allowing him to keep his position but severing his line of succession to the presidency.

According to media reports, allies of Senator Aécio Neves, a leader of the right-wing PSDB (Party of Brazilian Social Democracy), met several times with Supreme Court President Cármen Lúcia while he was being investigated for corruption. Eventually, she issued the deciding vote in a ruling that gave the Senate de facto veto powers over the Supreme Court’s decision in his case. The Supreme Court also allowed President Michel Temer to fill his cabinet with other elected officials prosecuted for corruption, whereas Lula was prevented from participating in Rousseff’s government for this same reason. Temer himself avoided standing in trial before the Supreme Court last year when allies in Congress shielded him from charges of corruption, obstructing justice and links to organized crime.

The supreme court arbitrarily targeting Lula Da Silva at a time when he leads the polls for president is an open attack against the Brazilian people’s right to vote. Moreover, the army’s Chief Commander General Villas Boas hinted in a tweet at the possibility of a military intervention if Lula’s sentence was not upheld. The arrest warrant on Lula was celebrated by the media giant Red Globo and all major newspapers.

ergio Moro, the prosecutor leading the Operation Car Wash investigation has close ties to the U.S. State Department, as a Wikileaks’ report shows. After Dilma Rousseff’s reelection in 2014, the judiciary power has increasingly played a prominent role in national politics. For this reason, different political analysts granted it the moniker of a “judiciary party.”

The Brazilian economy plunged in 2012 and has since not recovered, eliciting popular discontent and growing social polarization. In 2016, Congress impeached Rousseff on the charge of the mismanagement of public funds, a process widely recognized as an institutional coup d’etat.

Behind a bloated judiciary power overriding the executive branch and encroaching people’s democratic rights is an emboldened Right that seeks to pass harsher austerity policies and break the spine of labor through labor and pension reforms. Lula’s presidential bid could jeopardize these plans.

Amidst a growing rift between a conservative movement led by organizations like Free Brazil Movement (MBL) and Vem pra Rua (“Come to the street”) and the more impoverished and working-class sectors unequivocally opposing Temer’s austerity policies, the judiciary power rises as an arbiter. With no real accountability to the Brazilian people, this Bonaparte has been crucial in sweeping the Workers Party (PT) out of government and advancing Temer’s political agenda.

There is a Left that does not see any value in defending democratic rights under capitalism. The PSTU (Unified Workers Socialist Party) is one of them. Raving about Lula’s looming arrest, a statement in its website cheered the Supreme Court’s decision and naively hoped for the imprisonment of all of them [corrupt politicians]. These words are a display of not only a grave misunderstanding of the role the judiciary power in Brazil over the past 4 years, but also a bewildering trust in the state’s repressive apparatus to deliver ‘justice.’ Baffling as it may sound, the PSTU has maintained this position since the coup against Dilma Rousseff in 2016. Due to this implicitly pro-coup position, half the party split to form Movement for an Independent Socialist Alternative (MAIS).

The Party for Socialism and Freedom (PSOL), a multi-tendency left organization, has not managed to come out with a unified position on the case of Lula’s imprisonment. Whereas groups like the CST support Lula’s arrest, other forces within the PSOL, such as the MES (Movimento Esquerda Socialista), protested the ruling and called for his freedom and his right to run in the presidential elections.

The Movimento Revolucionário de Trabalhadores (MRT) understands the court’s ruling as a continuation of the institutional coup against Rousseff and the PT in 2016, and denounces the encroachment of the judiciary power into people’s rights. While calling out the PT’s truce and the CUT’s immobility, the MRT rejects both the arrest and the proscription of Lula Da Silva.

Do not wake the giant

Acknowledging the Brazilian Supreme Court’s attacks on democratic rights should not imply supporting Lula Da Silva or the PT. In fact, it was by the hand of Dilma Rousseff that Michel Temer rose to vice-presidency in 2014. And Supreme Court President Cármen Lúcia was appointed by Lula. Despite his past as a metal worker, Lula is a bourgeois politician who has not advanced anti-capitalist measures during his presidency, and who shirked from mobilizing the only real social force that could stop the right-wing attack: the Brazilian working class.

The Central Única dos Trabalhadores (CUT) is the largest labor federation in Brazil, representing 7.4 million workers. Despite the CUT being largely controlled by PT officials, the federation has not called for work stoppages, strikes, or other active measures in response to Lula’s arrest warrant. PT has not released a call to fight in the streets against the continuation of the soft coup; their truce in the terrain of class struggle has been a straitjacket for the Brazilian working class. And this has been the result not only of its unwillingness to flex the workers’ muscle, but also a natural consequence of their demoralization in response to Dilma Rousseff’s own attacks on workers’ rights in collusion with the right wing. The corruption scandals tarnishing her administration only make it an easier target for the right. It will be only over the heads of the PT’s officials that the Brazilian working class will break the inertia, shake its chains and become aware of its own power.

This piece has been edited