May Day in a Bureaucratic Union 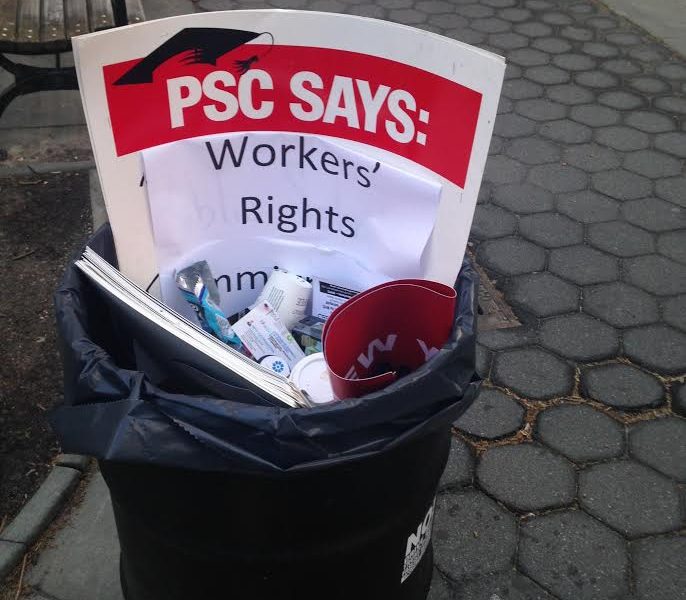 The following account was originally published on the CUNY Struggle blog under the title “May Day at the PSC” and was adapted for a wider audience for Left Voice.

Just over a hundred days after Trump’s inauguration, this year’s May Day is unmistakably different from the last. This is especially true at the union for CUNY’s faculty and staff, the Professional Staff Congress (PSC), which might be financially debilitated by nationwide “right-to-work” before next May Day and where over half the bargaining unit, consisting of adjunct faculty, is part of the growing precariat. And this is especially true at CUNY itself, where students are predominantly working-class and people of color, and over a third are immigrants—categories that will remain in Trump’s crosshairs for the next four years. Given the union’s purported solidarity with its students, its potential to lead a radical struggle uniting student issues with faculty issues with staff issues, its pretense as one of the most progressive and radical unions in the New York City, and its own threatened existence, one would expect the PSC to use the revitalization of May Day as an opportunity for militant direct action.

Although the gravity of the times is reason enough for militancy in the PSC, a single day of disruptive direct action could also have benefited our union in the long term. Members of the rank-and-file, old and young, know that adjunct faculty won’t achieve pay parity with their full-time counterparts in the near future—which would require doubling adjuncts’ poverty wages—without a strike. A May Day action that brushes up against the Taylor Law—a New York State law that prohibits public-sector strikes and is continually upheld by Democratic administrations—would be taking a small risk in exchange for a trial run of a real strike. Trust falls like one-day actions are necessary to train rank-and-file members as organizers and build solidarity within our union, thus preparing us for the greater risk of a future strike. Furthermore, joining other unions in the streets—many of which consist of undocumented immigrants taking even bigger risks than breaking the Taylor Law— would build ties across the city and help shift the balance of class forces against capitalists and their cronies in the city and state governments.

Yet the PSC’s May Day plans fell far short of militancy. Although alleging to join the call by academics nationwide for a “moratorium on university operations”, which called for “cancel[ing] classes, clos[ing] offices, and postpon[ing] maintenance”, the PSC leadership instead asked instructors with Monday classes to teach special lessons about Trump’s policies. Furthermore, the leadership did little to materially support this “action”: it sent a few emails, distributed flyers at chapter meetings, and created a shared Google Drive folder in mid-April, where only four PSC members uploaded only nineteen readings that the 20,000 instructors at CUNY could use to “teach Trump”. The PSC leadership also called for a contingent at the Foley Square rally on May Day, where bureaucratic unions and municipal Democratic politicians have gathered on past May Days to separate themselves from immigrant workers and socialist groups at Union Square.

It is perhaps even more disappointing that, despite the gravity and potential of this year’s May Day, the official PSC (in)action was decided without any input from the rank-and-file, from chapters, or even from the Delegate Assembly (the union’s “principal governing body” comprising delegates from every campus in the CUNY system), nevermind through democratic channels. Presumably, the decision was made centrally by the union’s de facto decision-making body, the Executive Council, or an even smaller circle orbiting the PSC president. When the lack of material solidarity with more vulnerable but braver unions, like those consisting of immigrant workers, was criticized from the floor of the Delegate Assembly meeting in April, the leadership responded that a contingent at the Foley Square rally constituted solidarity. Given the stubborn centralization of power in the PSC, one shouldn’t be surprised by the lack of political imagination that went into the PSC’s plans.

Rank-and-file activists in the CUNY Graduate Center (GC) chapter of the PSC realized the PSC’s milquetoast plans would only get soggier, so in late March we started planning a different action at the GC within the chapter’s Solidarity Committee. We advertised and held a people’s assembly to collectively decide what the GC chapter’s May Day action could look like, which brought over a dozen chapter members. Notably missing were any members of the New Caucus—the party that has governed the union mostly unopposed for seventeen years—despite the fact that their talk of active, dynamic chapters and their pretenses of solidarity, militancy, and progressivism would lead one to think that May Day would be a top priority. After a few weeks of organizing characterized by a consistent lack of material support from the New Caucus chapter leadership, we ultimately resolved to organize a walk-out from the GC to the Immigrant Worker Justice march, to circulate a GC-wide petition endorsing the call for an actual moratorium on university operations, and to present these plans at the GC chapter meeting in late April for a vote of formal support.

Unfortunately, the plans devised and worked on by the Solidarity Committee never received formal support. At the chapter meeting, representatives of the Solidarity Committee presented and wrote on a chalkboard a potential resolution that the chapter endorse the moratorium on university operations, urge chapter members to walk out and join the Immigrant Worker Justice march, and call on the GC president to excuse students and faculty from May Day actions. The resolution was tabled until the end of the meeting, following a de facto filibuster by a long series of presentations that could easily have been printed and read on one’s own time. Ten minutes before the meeting was supposed to end, one member involved in May Day planning interrupted the presentations to return to discussing the proposed resolution and eventually vote. Attendees expressed hesitations about the Taylor Law and noted that the chapter cannot endorse a resolution without quorum, which we didn’t meet, so the resolution was edited accordingly: mentions of the GC chapter were replaced and the walk-out was recast as a student strike, which avoids the Taylor Law. The deliberation turned chaotic, and fifteen minutes after the meeting was supposed to end, the chapter chair refused to call a vote and ultimately walked out of the meeting.

In short, the chapter leadership’s response to its own Solidarity Committee’s request that the chapter vote on plans that rank-and-file members had been working on for a month was simply “no”. The watered down resolution could have helped mobilize GC students and strengthen the GC contingent on May Day, in addition to demonstrating that chapters could outpace the progressivism of the union-wide leadership. Furthermore, holding a vote at a chapter meeting, even if it only represents the workers assembled at the chapter meeting, could have set a precedent for bottom-up democratic decision-making—something that, to my knowledge, never happens in any chapter of the PSC. This grassroots push for democratic decision-making has, however, succeeded in compelling the chapter leadership to open a conversation to design procedures for submitting and voting on resolutions.

Despite these obstructions to democratic decision-making, a contingent of GC students walked out on May Day and joined the Immigrant Worker Justice rally, meeting up with several more on the subsequent march. Some of us regrouped later in the afternoon at the Union Square demonstration, which—after an initial collision with the police who arrested a few dozen protesters who tried to take the streets—marched south to Foley Square. When we arrived at 7:30, the official PSC contingent had already dissolved. Judging by photos posted later on social media, several dozen PSC members attended the rally at Foley Square, including members of the GC chapter leadership and others from the New Caucus. We question the utility of joining large bureaucratic unions at what amounted to a well-financed, musical rally for the reelection of Bill de Blasio, whose thugs were meanwhile arresting nonviolent protesters at Union Square (possibly including some of our own students from the Internationalist Club at Hunter College). We can now say that the PSC’s recent undemocratic endorsement of de Blasio ended up setting the precedent for the PSC’s May Day plans a few months later.

Nonetheless, the rank-and-file resistance to the New Caucus’s timid incrementalism is growing, not only at the GC. Contingents from four other CUNY campuses, uniting both students and faculty, converged at Union Square, some in tandem with socialist groups like Socialist Alternative, the Internationalist Group, and Democratic Socialists of America. This year’s May Day revealed ever more clearly the capacity and need for two concomitant strategies to reform the PSC: first, horizontal organizing and actions without the permission of the leadership and, second, persistent demands for a democratic union, genuine material solidarity with our students and the working class, and a break from electoralism and incrementalism. 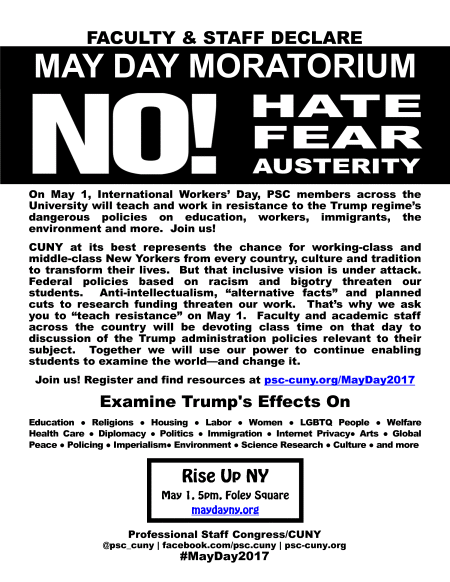