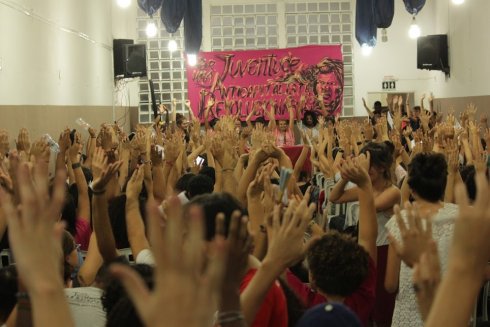 The following was the opening video to the conference:

In a plenary session of the conference, the youth of Faísca voted to fight against the attempt to impeach President Dilma Rousseff, as well as resisting the austerity measures implemented by the PT-led government, particularly in education. They voted to organise against factory lay offs and for the rights of the black community, LGBTcommunity and women. They also agreed to launch a campaign in support of the teachers and students on strike in Rio de Janeiro.

More than 400 youth form the new Revolutionary and Anticapitalist Youth.

Faisca will campaign for its policies in workplaces, universities and colleges. They will be holding a policy-making Congress in three months’ time.

Diana Assunção greeted the conference on behalf of the Movimiento Revolucionario de Trabajadores, speaking about the need for youth to unite to form a revolutionary group to topple capitalism.