Sanders has 40% of the vote, but Superdelegates Cut Him Down to 32%

The March 15 elections are a major milestone in the primaries. The Superdelegates’ vote reveals the blatantly undemocratic nature of the process. How will Sanders fare in the face of the “rigged” political system he set out to battle? 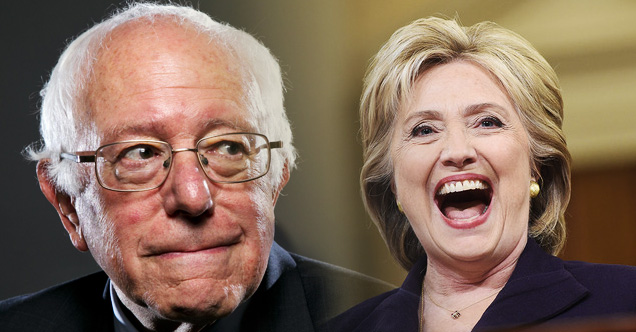 Today’s primary elections will be a major milestone in the race for presidential nomination. Florida and Ohio are the biggest states at stake. Polls predict a close contest between Clinton and Sanders in Ohio, Missouri, and Illinois. While the primaries are playing out at the ballot, an important part of the electoral game is taking place behind the scenes.

With almost all votes cast in the deep south, Bernie Sanders has managed to pull through with 40 percent of the popular vote. When it comes to the competition for total delegates, however, the distance between the two candidates stretches to a gaping 70-30 percent. What explains Hillary’s mysterious advantage in the “actual” primary race?

By now, most of those who follow the presidential elections know about the Democratic Party Superdelegates — those strange characters, blissfully free from the influence of the popular vote. They are not beholden to any constituents, besides maybe the Party establishment, and with nearly 20 percent of the share of total pledges, carry an overwhelming weight in defining the Democratic nomination. Who are they? Senators, governors, Democratic Party officials and other electeds who can cast a vote for whichever candidate they please, regardless of how the chips fall during the primaries in their state or district. The Superdelegates’ vote is thus completely divorced from any “democratic process” and, safe to say, reveals the blatantly undemocratic nature of the nomination.

This explains why Sanders is trailing so far behind in the real race with Clinton despite his impressive performance thus far.

Sanders’ total popular vote as of March 14 is an estimated 3,392,721 while Clinton’s is just above the 5 million mark, with 5,034,855. This count is imprecise since nearly 10 percent of the votes were cast under the caucus system. Regardless, our main argument still stands: Clinton’s lead, with 748 pledges by popular vote to Sanders’ 528 (a difference of 220), gets a huge boost and jumps to 1,235 for Clinton, 580 for Sanders with the help of the Superdelegates already pledged (a difference of 655). That is, Clinton ends up with more than double Sanders’ delegate count. If the world was once scandalized by Lance Armstrong’s doping scandal, we should be up in arms about this one. With the Superdelegates, Hillary Clinton is getting all the “performance-enhancing” help she needs – exactly what they were designed for. This mechanism was created by the Hunt Commission in 1982 as a “safety check” to reign in the presidential nomination process – a revision made by party leaders after the Democratic National Convention of 1968 ended in turmoil and forced the party to “democratize” the primaries.

The Democratic Party establishment is not the only force Sanders is coming up against. The mainstream media has been blatantly waging a campaign against him. For example the Washington Post recently ran 16 anti-Bernie articles in 16 hours . The Post’s skeptical titles range from “Even Bernie Sanders can Beat Donald Trump” (emphasis added) to “Bernie Sanders’s Two Big Lies About the Global Economy”.

The New York Times has allowed some Bernie-friendly pieces to slip through here and there, but its underlying message as expressed in a March 14 editorial is that Bernie Sanders may mean well, but he’s utterly unfit for the White House: “Mr. Sanders has held fast to his progressive message and principles. But he hasn’t gotten many big things done.”

Up until recently, the Times kept a continuously updated “calendar,” in which the total pledges per candidate were prominently displayed, including the Superdelegates. This, like any other biased measure, paints Hillary Clinton as the safe winner and pays her an invaluable service.

Rigged or not rigged?

One of the main reasons why Bernie Sanders decided to run for president was to denounce the “rigged” character of the US electoral system – and he’s done so, to some extent. Ironically enough, he decided to run on a Democratic ticket. For this reason, some forces among the radical left have withheld their support , while others have jumped on the Sanders bandwagon almost uncritically .

For those who support Bernie Sanders but have no hope for the Democratic Party, one thing is hard to swallow: his scant criticism of the same Democratic Party establishment, which once barred the Sanders’s campaign from its own voter database and now lumps the Superdelegates into Clinton’s camp. Furthermore, bleaker living conditions, widespread political disillusionment, American democracy’s deepening crisis of legitimacy, and a renewed interest in socialism especially among youth have given thrust to Sanders’ campaign – with millions of donations and thousands of volunteers. With a glimpse of a chance to win, Sanders’ supporters have become increasingly excited.

So if at this point Sanders still remains silent on the true undemocratic nature of the primaries, when he has become a clear threat to Clinton and is a perceived threat to the Democratic establishment, is he doing more to unveil the “rigged” electoral system or to legitimize it?

If he loses, calls the race a fair competition, and asks for his voters to support Hillary Clinton as he already said he would, how much will his campaign challenge the rigid anti-democratic two-party system? How much will it serve to validate the electoral farce?

This brings us to a topic we will discuss in an upcoming article, that is, the role of elections for revolutionaries. If Bernie Sanders wanted to unleash a real social revolution, he would use every chance to denounce the falseness of representative democracy, the plutocracy of Congress; instead of paying homage to Justice Scalia , he would question one of the most undemocratic institutions at the helm of US politics – the Supreme Court.

However, it can be said that the enthusiasm and movement around Sanders is broader than his limited campaign. When he caves to the mandates of the DNC, sectors of his base may break out and raise a more radical program. In the near future we may see break-ups, splinters and regroupment among his base.