On the week of June 29, Brazilian President Dilma Rousseff of the Worker’s Party (PT) visited the United States, on what can best be described as a sales tour, aiming for the US government and businesses to invest in Brazil. 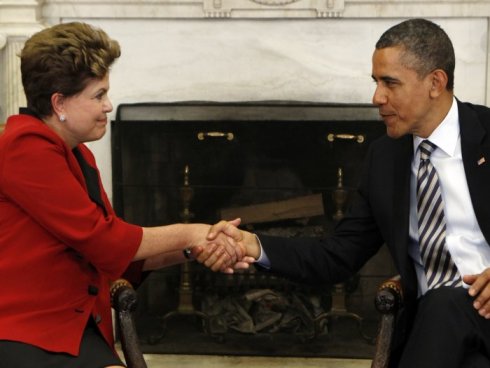 Dilma, as she is called in Brazil, visited with Obama, as well as a long list of prominent corporate leaders such as the reactionary Rupert Murdoch, seeking American investment in the weakened Brazilian economy. However, the policy of seeking foreign investment will only hurt workers and Brazil in the long term. Dilma’s attitude is a marked shift from prior attitudes towards the US that were marked by a sense of nationalism and of making clear to the US that they could not push Brazil around.

Who is Dilma and the PT?

Dilma, of the Worker’s Party (Partido dos Trabalhadores, or PT), is in her second term as President. The Worker’s Party was formed in the 1980’s with wide support among the Brazilian working class. The first Worker’s Party (PT) President, the very popular Luiz Inácio Lula da Silva , created a minimal welfare program that provided a degree of spending power to a wider sector of the population during the Brazilian economic boom of the early 2000’s. However, Lula also expanded private universities (as opposed to free, public ones), as well as of precarious, sub-contracted jobs.

Today, in Brazil’s economic downturn, the PT government is cutting more and more social services, such as unemployment benefits, as well as public spending on education and health care. Such policies have earned Dilma the second worst approval rating of any Brazilian President. In contradiction with the name of the party, the PT forces the working class pay for the economic crisis, while opening the country to foreign capital in order to revive the economy and fill the pockets of foreign investors.

The PT was part of a Latin American wave of Presidents who were more willing to speak against US foreign policies. While Hugo Chavez of Venezuela is the most extreme example of this, the PT was also willing to set delimitations to the US. For example, in 2013, Dilma canceled a trip to the US, an unheard of political move.

This trip to the US is the first time that Dilma has been to the United States since the 2013 scandal in which the Obama administration was caught spying on Petrobras and on the Brazilian government. In 2013, Dilma canceled her visit to the US with harsh words for the United States government. Dilma demanded a written explanation and apology, which never came. However, the political and economic situation for Brazil and the PT government has changed a great deal since 2013. The PT government was still willing to criticize American imperialism, in 2015, the PT has changed its tune singing nothing but praises to the US government and its corporations. Dilma’s trip demonstrates a shift in Brazilian foreign policy, shifting from a more nationalist rhetoric of strengthening Brazil to one of opening the markets to foreign investors.

Dilma met with President Obama, unveiling a mutual commitment to increasing renewable energy in their respective countries to 20% of energy generation by 2030. Obama stated that Brazil was an indispensable ally, particularly in climate change and in fighting terrorism.

Dilma also met with former Secretary of State, Henry Kissinger. In the 1970’s, he was known for backing military dictatorships throughout Latin America. Dilma stated that Kissinger was a “fantastic person” and that their conversation was “productive, thought-provoking and inspiring.” These kind words are especially ironic as Dilma speaks openly about the torture she suffered at the hands of the Brazilian military dictatorship. Dilma’s stance against the dictatorship and the horrendous consequences she experienced may have won her votes from progressive individuals during the close electoral race. Yet, in the United States, she had nothing but positive things to say about one of the primary proponents of Latin American dictatorships.

Dilma spent the greatest part of her tour of the United States meeting with corporate leaders. She met with Rupert Murdoch, the owner of News Corporation, the media giant that owns Fox News, The Wall Street Journal and much more. On the very day that Dilma met with Murdoch, the Wall Street Journal published four Brazilian sponsored pages announcing Brazil’s plans at privatizing ports, airports, railways and highways

Dilma also met with leaders of large American corporations such as General Motors (GM), WalMart, General Electric (GE), Coca-Cola, among others. In her meetings, Dilma states that she hopes to make Brazil a more “open and competitive economy” and ending the “hellish bureaucracy” that still exists in Brazil.

Reading between the lines of Brazil’s newly “open” economy

When Dilma says she hopes to make Brazil more “open”, she means open to foreign investors to make a profit off of Brazil. This feeling “open-ness” was echoed by the Brazilian Minister of Development who also went with Dilma to the United States and said that a free trade agreement with the United States was an “aspiration” of the Brazilian government. He said, “The agreement is an aspiration and is on the horizon.” This marks a shift in the PT’s prior position and demonstrates yet another capitulation to US imperialism.

In economists’ language, a “more open market”, which Dilma spent her US visit advocating means fewer rules for foreign corporations. In other words, Dilma is sending the message to the US government and corporations that they will have an easier time raking in profits from the Brazilian economy.

Although no free trade agreement was negotiated on this visit, it is the politics of “open market” taken to its extreme. A free trade agreement would mean trade free of many rules and of taxes. In the past, free trade has been a position of the right. However, it is now espoused by the PT in order to re-activate investments in a stagnant economy and to overcome the current economic crisis. However, opening Brazil to foreign investments will only deepen the already huge Brazilian dependance on foreign capital, especially from the United States.

This trip to Brazil did help one Brazilian sector- the meat industry. As the US announced during Dilma’s trip, their markets will re-opened to Brazilian meat imports, which had been limited for the past 14 years. These large Brazilian corporations such as Mafrig, BR Foods and JBS hope to go from exporting 22 million tons of meat to 64 million.

In the case of a free trade agreement with the United States, Brazil will increase their exportation of raw materials and low-value products, like meat and orange juice. The US, however, will flood the Brazilian economy with high value industrialized products while paying no importation taxes to the Brazilian government, which could be a hard hit for the already weakened Brazilian economy.

Aside from privatization, fewer rules for large corporations and a free market, Dilma knows that foreign investors also want cheap labor if they are to invest in Brazil. That is why throughout her US trip Dilma spoke in defense of her budget cuts, which are based on cutting social spending and making more flexible worker’s rights laws. This will provide corporations with cheap labor so that they can make an ever greater profit off of their investments.

This trip to the United States demonstrates the PT strategy for dealing with the Brazilian economic crisis- seeking to find a short time solution to their economic problems with an influx of foreign capital, while forcing workers to pay for the crisis by cutting social services, and taking away workers rights. In the long term, not only does this hurt workers but hurts Brazilian sovereignty by making them dependant on foreign corporations. While Dilma states that her trip to the United States was “extremely positive”, the effects of the policies espoused on the trip spell disaster for Brazilian workers.