Millions cut short their Thanksgiving to shop on Black Friday. Are those early shoppers “more capitalist”? What does it even mean to be capitalist? 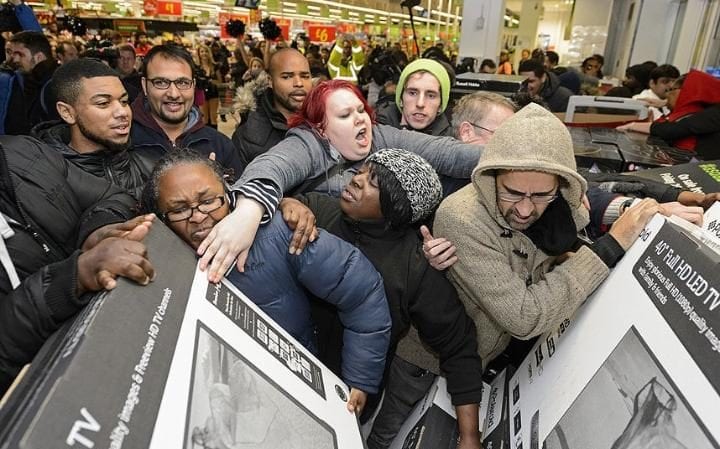 Long lines of people standing, sitting, even camping in 30 degree weather, just waiting for a store to open to buy that phone, that TV, those sneakers. These folks cut short their Thanksgiving dinner, or even skipped it, in order to sit outside in the cold. Every year on Black Friday, there are fights and injuries as a result of the rush to buy — the rush to save some money on some expensive or new product.

Worse still, the promise of mega profits by the capitalists on Black Friday has meant that they force workers to cut short their holiday short in order to work on Black Friday serving these excited and often rowdy crowds of people. Some make overtime pay, but many do not, working through the night on the day after Thanksgiving. It is important for socialists to be in solidarity with these workers- fighting for higher wages, shorter work hours and Thanksgiving day off.

Thanksgiving and Black Friday are pretty indicative of the contradictions of capitalism in the wealthiest country in the world: The day after Thanksgiving, supposedly a day to be thankful for non-material things — friends, family, loved ones — millions go to work and even more go shop, literally trampling each other for the best deal.

Many liberals are quick to judge those who stand in lines for the best deal. “They are so capitalist!” they say. This is an important misunderstanding of what exactly capitalism is.

Capitalism is a system in which the owners of the means of production exploit workers who produce. In other words, they buy the labor power of workers and make a profit- and they buy it at the lowest rate possible. It is easy enough to see how this works through this (slightly oversimplified) example: If a worker makes Subway sandwiches, her labor power is purchased at about 10 dollars an hour. However, in an hour, the worker produces, say 30 meals at 6 dollars each, producing about 180 dollars an hour. So, the worker gets paid 10 an hour and produces 180. At the end of the day, the worker is paid 80 dollars and produced over 1,400 dollars. Multiply this over every Subway worker. It’s a lot of profit.

Where does all that money go? Some portion goes to pay the necessary expenses of production (maintenance of the machines, purchasing ingredients, shipping etc). But, a good chunk of that money goes to the pockets of Subway’s owners and CEO. When you think about this difference between the profit produced and the take-home pay for every single worker, we can see how company owners get so rich while the rest of the working class remains so broke. They only pay us enough to subsist while making billions off of our labor. Thanksgiving and Black Friday are great examples of this dynamic: workers make meager wages while the profits are stunning.

This is the essence of capitalism — the workers gets exploited and the capitalist pockets millions produced through workers’ labor. Workers have nothing else to sell but our labor power and so many have to be hyper exploited on Thanksgiving day to make a living.

Consumerism, on the other hand, is associated with the consumption of commodities. Everywhere we look, the capitalists try to tell us that purchasing things is an expression of love. This is the reason that millions of working class people who have Friday off get up early or cut Thanksgiving short to buy themselves and their kids the newest video game or phone or sneakers.

So, shopping on Black Friday doesn’t make you “more capitalist.” I might even argue that it might make you more working class. See if Sam Walton or Bill Gates brave the crowds on Black Friday. They sure as hell don’t.

Of course, within today’s capitalist economy, people buy lots of commodities and capitalists are always trying to create desires for new products. Consumerism is fed by the constant reinvention of products, like the new versions of iPhones released every year or so, as well as by planned obsolescence of products, so that we must always go buy more. Consumerism is, without a doubt, a central marker of American culture, which the U.S. hopes to spread across the world along with their corporations and their products.

No doubt, consumerism plays a central role in capitalism, but it does not define capitalism. Today’s capitalist economy could not live without consumerism, but that was not always the case. The U.S. was still capitalist during times of much lower individual consumption such as the depressions and wartime economies.

Modern mass consumerism picks up in the ‘50s, when the American war industry was no longer producing weapons and had to find new commodities to produce. It was a moment when the demolition of the European economy and European industry made the US the central producer for the whole world. However, weapons were no longer in such high demand, so the force of U.S. industry was put behind producing consumer goods and making a lot of profit. These economic conditions allowed the US to provide a higher standard of living after the war. An additional benefit of these higher standards of living was demonstrating that that “life was better” in capitalist countries, as the Cold War competition with the Soviet Union and Eastern Bloc countries kicked off.

The Problem With Equating Capitalism With Consumerism

Defining capitalism as consumerism creates several problems for those of us who wish to overthrow this system. First of all, it means that all those who line up for a cheap TVs are capitalists, regardless of their job or relationship to production. It means that someone who works at Subway for 10 dollars an hour but really wants Nike sneakers is more capitalist than someone in the Walton family who shuns material possessions and hope to live a more “simple life” without mass industrialized products.

Secondly, if capitalism is equated with consumerism, the strategy to fight capitalism is just buying less. The problem is that we still have to buy to live—we have to eat, wear clothes, etc and those products will still be produced by the exploitation of the working class. Less consumption won’t stop the capitalist from producing or profiting– it won’t stop the capitalist from paying workers meager wages in sweatshops in China or in retail in the US. Reducing consumption will maintain the exploitative relations of production. At best, it just means the capitalist will profit less or seek to make a profit elsewhere (through layoffs or paying their workers less oversees).

And besides, how can we compete with the billion dollar advertising machine? Can we really get people to consume less if we don’t own the means of production and the media ourselves? This seems like a losing strategy- one of individual lifestyle politics but that doesn’t get to the heart of the capitalist system.

When faced with the hyper exploitation of workers at huge businesses like Walmart, some people buy local. Yet, often these local shops are usually more expensive and less convenient for working class people. Even in small businesses, the same relation of exploitation is still there (the owner still depends on the worker to produce profit for them). Just think about local shops that ask their kids to work there for free, or workers to volunteer time or accept lower wages because the company is struggling economically.

Yes, there will be SmartPhones in Socialism

We hear this logic all the time from people who say “Some socialist you are. You have an iPhone!”

Being a socialist does not mean that I am against having a cell phone — it means fighting against the exploitation of the Chinese workers who made my cell phone and the American workers who shipped and sold it to me. It means seeing the connection between American and Chinese workers and fighting for our unity across borders. It means understanding that we have the same bosses and the same enemies. I do not fight for a society without cell phones, but for a society without bosses who profit off of workers’ labor, in the United States and around the world.

If capitalism, in its essence, is the exploitation of the worker by the boss, then fighting consumerism is not the same as fighting capitalism. Fighting capitalism means that the workers must unite to rebel against the boss that profits from their labor and the system that maintains exploitative relations. It means that the GM worker who has the day off on Black Friday and goes shopping has the same class interests as the Walmart worker who is forced to work. It means that we need to show solidarity with workers fighting for higher wages or shorter working hours on Thanksgiving with the clarity that the boss is our enemy.

The focus for anti capitalists should not be on changing how people consume; it should be on changing how the working class produces. It should be the fight to expropriate the capitalists and create a society democratically run by the working class- one in which we think about how to produce without destroying the environment. In this sense, socialists fight for a society without exploitation, not for a society without products.