The Amalgamated Transit Union Local 1277 (LA) expressed their support if and when UTLA strikes. 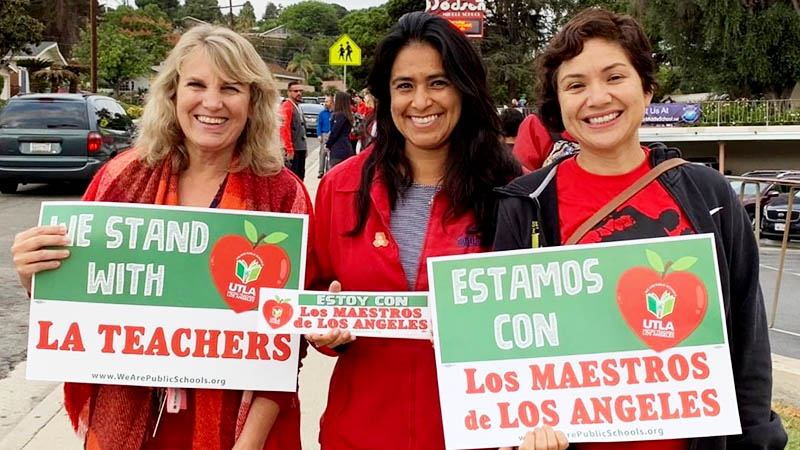 In light of the pending Los Angeles teachers’ strike, set for January 10th, it is imperative that the labor movement show active solidarity with United Teachers of Los Angeles (UTLA) — the LA Teachers union — in their time of need. Teachers are fighting for the right to quality public education for this generation and future ones. We all have a stake in the outcome.

We print below a model resolution passed by the Amalgamated Transit Union local 1277 (Los Angeles) in solidarity with the LA teachers union. Activists across the country should submit similar resolutions that commit their own unions to give active solidarity.

The pdf of the original ATU 1277 resolution can be viewed online.

Motion in Solidarity with the UTLA

Whereas, our union sisters and brothers in the United Teachers of Los Angeles (UTLA) have been in a year-long fight with the Los Angeles Unified School District where the district has refused to bargain in good faith; and

Whereas, solidarity is the [highest] principle of labor, and it is more crucial than ever since the Janus decision that public sector employees stick together; and

Whereas, UTLA members voted overwhelmingly in favor of authorizing a strike by their union; and

Whereas California ranks 43 out of 50 in funding per pupil and 48th overall in class size even as it is the richest state in the country; and

Whereas the bipartisan nationwide attack that has drained resources away from public education is now led at the national level by Trump’s “voucher vulture” Betsy DeVos while here in Los Angeles it was spearheaded by Democratic mayor Villaraigosa and continues under his successor Garcetti; and

Whereas teachers strikes from West Virginia to Oklahoma to Arizona and elsewhere, defying anti-labor laws, have inspired workers across the country looking for a way to fight and win in the post-Janus environment; and

Whereas the fight for funding public education is linked to the fight against privatization and systemic racism affecting the population we in ATU 1277 serve, including our own children; and

Whereas the 1989 UTLA teachers strike showed that a united determined struggle can win significant gains that benefit not only teachers and students but the labor movement as a whole; therefore be it

RESOLVED that ATU 1277 stands shoulder to shoulder with our sister and brother Union teachers and that in the event of a strike we seek to mobilize our union members to participate in UTLA picket lines.