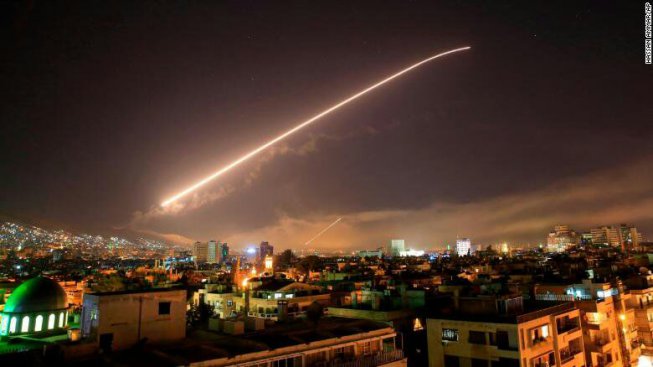 Last night, the U.S., U.K., and France launched over 100 airstrikes on Syria as a response to the alleged use of chemical weapons by the Syrian regime. The Organization for the Prohibition of Chemical Weapons (OPCW) was on its way to an on-site investigation in Douma, where the chemical weapons had ostensibly been used by Assad’s forces.

The bombing of Syria should be widely condemned as an imperialist encroachment on foreign territory. The UN has been presented many times as expressing an international consensus, and thus providing legitimacy to atrocious military interventions. This time, however, not even this tenuous façade was used. American, British, and French forces carried out a joint aerial attack without approval of the UN Security Council (ostensibly because there was no agreement). For this reason, Russia, China, and Iran have denounced the attack as a violation of international law.

It should be clear by now that nothing good can come of this bombing or any other such military intervention. It can only increase the death toll, the injuries, and the destruction in a war that has already claimed half a million lives and has caused the displacement of millions of people.

The militaristic interventions in Afghanistan, Iraq, Libya, and Syria, among many others, have shown that far from fostering “democracy and progress,” bombs and weapons can only bring what they’re made for: death and destruction. And there’s more: Military intervention in the Middle East creates the an opening for the emergence of radical Islamic forces like ISIS. Overall, more than 11,000 bombs have been dropped so far by the U.S. alone in its military campaign in Syria.

Moreover, it should be clear that the Trump Administration has no concern for the suffering of the Syrian people and White House’s rationale for the attacks is entirely hypocritical. One of Trump’s first major actions in office was to implement his infamous Muslim ban, which prohibited the entry of residents from seven Muslim-majority nations, many of whom were fleeing repression from authoritarian regimes, like Assad’s or terror organizations like ISIS. In 2018, so far, just 11 Syrian refugees have been allowed to settle in the U.S.

Most “progressive” members of Congress did not denounce the attack. It would have been good to see Bernie Sanders or other progressive Congress members call out the bombing for what it is: an imperialist attack. Instead, they only criticized Trump for ordering the airstrikes without consulting Congress. The Authorization for Use of Military Force Against Terrorists (AUMF) act, passed in 2001 immediately after 9/11, gives the White House some limited leeway to authorize military actions without Congressional approval. Barack Obama used the AUMF 19 times to order military operations in Guantanamo Bay, Cuba, as well as Afghanistan, Libya, and Yemen, among many others.

Of course, the U.S., the UK, and France are not the only foreign powers involved in the Syrian war. Turkey, Russia, Iran, and Saudi Arabia have directly or indirectly contributed to the devastation of the country with the excuse of either fighting terrorism or fighting Assad’s regime.

Condemning the U.S. American bombing of Syria (and all foreign military intervention, for that matter) does not mean supporting Bashar al-Assad. With or without the use of chemical weapons, Assad’s government has engaged in a murderous repression of opposition forces since the 2011 uprising. Over 1,000 people were killed by Assad’s forces in just one week last month.

It is unclear whether this intervention will usher in a progressive escalation of hostilities in Syria, particularly between opposing powers acting through regional allies. Donald Trump’s “mission accomplished” statement seems to suggest a one-time “deterrence” strike. But the overriding of the U.S. Security Council is an additional factor increasing tension between the U.S. on one side and Russia and China on the other, which could eventually lead to an inter-imperialist war growing out of a regional battleground like Syria.

The Syrian people, with the support of the working class around the world, must decide their fate. Neither American, nor European nor Russian bombs will end the misery and oppression inflicted by the Assad regime and ISIS. Therefore, we must denounce and organize against the attacks of the Trump administration and all foreign powers.