Tamás Krausz: Lenin’s Legacy as a Threat to Capitalism 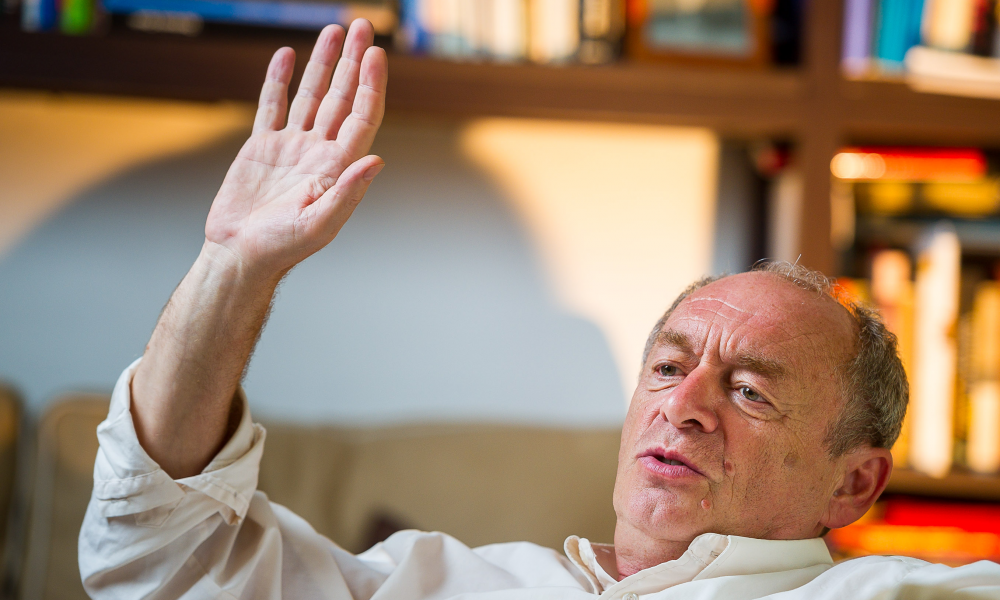 Tamás Krausz is a Professor of Russian History at the Eötvös Loránd University of Sciences in Budapest, a leading Hungarian intellectual and political activist. He traveled to Brazil to participate in the seminar “100 Years of the Russian Revolution,” sponsored by Boitempo, and to launch the Portuguese translation of his book Reconstructing Lenin.

Krausz was interviewed in São Paulo by Simone Ishibashi, editor of Ideias de Esquerda and PhD student at UFRJ, and Paula Vaz de Almeida, Doctor in Literature and Russian Culture at USP.

Our first question is about your book, which has been recently released in Brazil. What does the title, Reconstructing Lenin, tell us about your goals as a historian and the effort to restore the importance of Lenin’s legacy in the 21st century?

Tamás Krausz: First, we need to understand that this book was originally written in Hungarian, and its original title was Lenin — A Theoretical And Social Reconstruction. Since the transitional regime in Eastern Europe in 1989 and the dissolution of the USSR two years later, almost thirty years have passed. Throughout Eastern Europe, there is a falsification of the history of socialism, the history of the USSR, and the legacy of Lenin. This is due to mainstream capitalist propaganda which claims that we built a new authoritarian regime. This kind of falsification continues not only in Hungary, but also in Ukraine and the Baltic countries, Poland, and even Russia. I think we need to straighten things out. It is necessary to seriously look at what Lenin actually said. What did he do? What did he spend his time on? That is how this book came about.

It seeks to examine Lenin as a historical figure, without waging war on anyone because the old cult of Lenin no longer exists.Today, there is an anti-cult. Lenin became some kind of demon – a devil that scares children. I’m not saying that’s the only analysis that exists or that this only happened in Eastern Europe. But the idea is that in the mainstream, the prevalent ideas, are falsifications.

In the book, you address a series of methodological considerations in discussion with distinct interpretations of Lenin and the Russian Revolution. You affirm that history did not accomplish Lenin or Marx’s ideas. Faced with this claim, there are several interpretations. As you indicate, one is characterized by a mechanistic determinism that sees historical processes as a series of logical events with no alternatives. This is the intellectual spirit of the times. In your opinion, what marks the spirit of the current epoch, and how does this influence the theoretical and political legacy of Lenin?

It is necessary to understand the political and theoretical tradition I come from and approach the subject from. As a Marxist, I think capitalism is not the last stage of historical development. That is a concept which was denied by the old system of state socialism [in the Stalinized USSR]. All of this influences my position.

I studied Georg Lukács, the great Hungarian Marxist philosopher during the 1960’s, and fully understood, even at 20 years old, that history is a process with alternatives. As your question well states, we need to study these alternatives — and if we don’t know these alternatives, then we cannot place Lenin in this historical process. That is to say that the Lenin represented in the book didn’t even know what would happen after the October Revolution. Lenin and the other revolutionaries assumed that there would be an international revolution throughout Europe, and the Russian Revolution would be its spark. But history followed a different path. Lenin and the other revolutionaries found themselves in a place nobody imagined. Not even Lenin himself knew what would happen in the Soviet Union.

As the leader of the USSR, Lenin understood that socialism is a system that needs conscious direction, that socialism needs time, decades. The first falsification stems from this: Historians wanted to prove that Lenin was dogmatic, a utopian politician, but it is anti-scientific to write about history as if we are smarter than the people who lived in Lenin’s time.

There are historians who think they are smarter and more left than Lenin. These historians are incorrect. What were the alternatives presented to Lenin? Bourgeois democracy was an alternative that simply did not exist in Soviet Russia at the time. There were two alternatives: the White Army or the Leninist Communist Party and the dictatorship of the proletariat from 1918 to the death of Lenin. Between these alternatives, there was no other serious alternative. You see what I mean? It’s concrete.

After Lenin, Stalin is another issue. [In Stalin’s time] there were alternatives, of course. But it is also necessary to find true alternatives that were really plausible. As we say in Budapest, if my grandma had wheels, she would have been a bus. We can’t treat a historical process that way.

You say that Lenin foresaw that Russia would be a “revolution of a new type.” What does that mean, and what are its general characteristics?

Many historians believe that the revolution was executed by Lenin and his colleagues. However, Lenin himself did not see it that way. In December of 1916, in Zurich, he didn’t know if there would be a revolution or not. This is not an exact quote, but he said that only the old would live to see the Revolution. What does that mean? Lenin, as a revolutionary leader and a founder of the Soviet State, was a product of those workers, peasants, sailors and soldiers, all of whom organized the soviets – peasant soviets, soldier soviets, urban worker soviets, and factory committees. All of this made Lenin the leader whom we know. Do you understand what this is about? Not Lenin himself, but the movement.

Secondly, it is necessary to understand that it wasn’t the Bolsheviks who made the Revolution. The Revolution made the Bolsheviks. This is our point of departure. That doesn’t mean that they didn’t influence a historic process. They did – and they did a lot! But we need to understand, and this goes back to our first question about the alternatives, just how the Bolsheviks took power and for what reason. Historical science is to study these historical reasons for and consequences of social phenomena. It’s not the other way around, because that way begets falsification. Don’t confuse motive and consequence.

And let me add one more thing. Why do these new regimes in Eastern Europe fear Lenin? It is very important to answer this question because these new regimes understand that if millions of people brought Lenin to power and followed him, he is a threat. This is why they hate him, and the reason they lie about him and persecute his legacy. They understand, much more than a common person, that Lenin is an alternative to capitalism.

To close, you recently presented your book at a bookstore in Moscow, and you point to a disparagement of Lenin, the founder of the Soviet State. To you, the fundamental reason for this is the fact that Lenin is synonymous with an anti-capitalist alternative to the current regime and to the current system of capitalism in semi-peripheral Russia. Brazil, also a semi-peripheral country, is also experiencing a dynamic social and political moment. What lessons can we take from Lenin’s life and legacy?

Today, Brazil is a good place to learn about Lenin. I am sure about that. It is different for us in Hungary and Poland, the Baltic countries, as well as Ukraine, with pro-Nazi regimes financed by the United States. How can we even talk about Lenin? That’s not a joke. He is the devil; he is illegal. It is different for you in Brazil because you have this miracle – young people, more than two thousand young people, who are interested in Lenin. He would certainly be very happy that he is not completely dead, contrary to what the propagandists in Eastern Europe would have us believe. It is clear that you can learn about him here.

I dare say that the most important lesson that Lenin has taught us is to ask: What is capital afraid of? What does the system fear, which workers’ movements? Lenin knew that everything is resolved in the workplace. Capital isn’t afraid of street occupations or even occupations of plazas in Manhattan. You see, the Occupy movement was a very important event, but capital, the state and the capitalists, were not afraid of it. They can just sent in the police to shut it all down.

Capital knows that rank-and-file workers organized in factories and workplaces can take power and control every sphere of life. This happens, and it happened when millions joined factory committees, workers’ soviets, peasants’ soviets, etc. and organized to control the means of production.

Another lesson: At the beginning of World War I, Lenin wrote a book about imperialism, saying that capitalism of the 20th century had acquired other traits. Capitalism had become more of a looter and a parasite. Now, in the 21st century, these relations have become global. In these relations, the traces of what Lenin wrote about are still there. And to add one more thing: Capitalism has prostituted itself and prostitutes all of society. That is new.

Social Democratic leaders [of Lenin’s time] only looked at the so-called central countries in the capitalist system and believed it was better for workers there to stop [production]. If they stopped there, the rest of the world would be fine; the semi-periphery and colonial countries meant nothing. But here Lenin changed the direction and showed that there are those who are on the bottom rungs of the world hierarchy and that we must transform international capitalism from below.