Tensions Rise in the Final Stretch of the Midterms

A snapshot of the political situation days before the U.S. midterm elections. 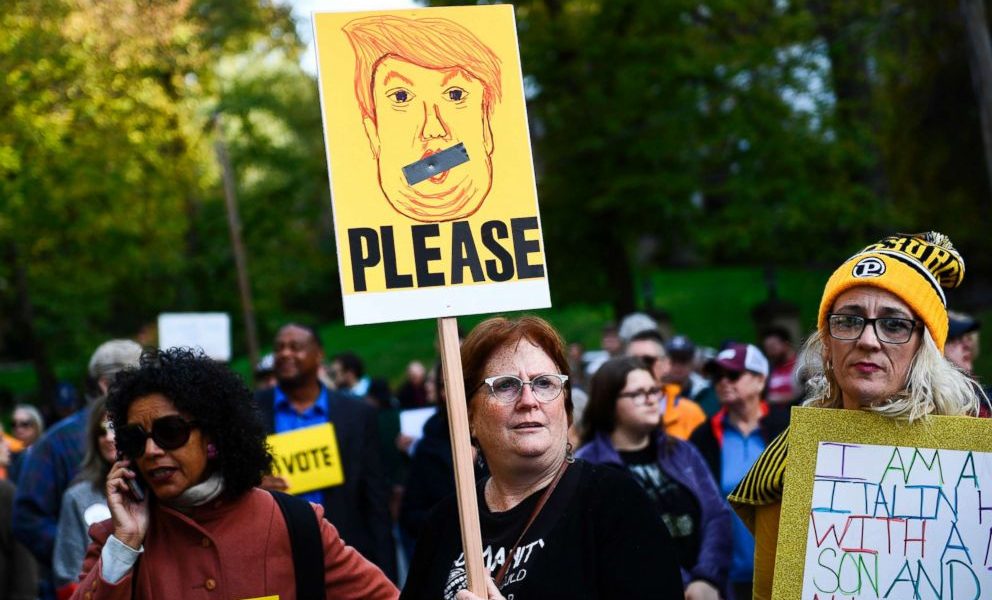 People protesting against President Donald Trump in Pittsburg after the shooting at The Tree of Life synagogue. Image from ABC News

The social polarization of the past couple years has had an impact on both parties. While in the 2016 race Republicans were reluctant to embrace Donald Trump—afraid that he could harm the GOP more than he could lift it up—in this election cycle most of the party’s candidates have fallen behind his leadership. Trump’s victory in 2016 has redefined electoral strategies. Whereas in previous elections one could see a more clear attempt to convince the undecided, or to win the votes of those in the center, the GOP’s strategy now seems to have largely shifted to trying to consolidate the conservative base. For this purpose, Trump’s politics and rhetoric have been more than helpful: the massive tax cuts for the rich in late 2017, his nationalist rhetoric, the confirmation of Brett Kavanaugh for the Supreme Court and, more recently, his vilification of the Migrant Caravan, the leaked plans to erase the transgender identity and his planned attack on birthright citizenship.

It makes sense: The Republican base is disproportionately white, male and non-college-educated. Even though this strategy has a clear ceiling (in terms of reaching new voters), U.S. elections are decided not only by what percentage of the population picks one candidate over the other, but also by the turnout of the contending voting blocs. Trump has shown that he can get out the vote, and that’s all that now matters for the GOP.

The Democratic Party’s catastrophic defeat in the 2016 elections signaled the utmost inability of Third Way Democrats to rally their own base to the polls, and it opened a crisis of leadership in the party, leaving room for new expressions. Much has been written about the new generation of progressives and self-declared socialists trying to wrest control of the Democratic Party from “establishment” Democrats, or at least carve out a space for themselves within the party. The names Alexandria Ocasio-Cortez, Ayanna Pressley, Rashida Tlaib and Julia Salazar are only some of them. And as is evident from these examples, women are playing a prominent role in this endeavor. The party apparatus, however, remains under the tight control of seasoned, moderate party leaders such as Nancy Pelosi, Chuck Schumer, Tom Perez and the like.

It is unclear where the line is between socialists and progressives among the Democrats, or even between socialists and liberals such as Elizabeth Warren. All in all, a considerable number of Democratic Party candidates have embraced key demands advanced by the progressive wing: Medicare for All, a $15 minimum wage and criminal justice reform (which includes legalizing marijuana and ending money bail). Tellingly, none of these demands were taken up by Hillary Clinton in the 2016 campaign. Democrats have found that talking about working-class issues can actually give them the votes they need. At any rate, the emergence of this new layer of self-declared socialists and progressives running on the Democratic ballot line has breathed new life into the party.

At the same time, the emergence of this left wing has made some Democrats uncomfortable. Nancy Pelosi’s remark that “socialism is not ascendant in the Democratic Party” is by now well known. But there are more bizarre expressions of this reaction within the party. For example, Joe Donnelly, candidate for Indiana’s Senate, is seen in a campaign ad chopping wood, criticizing “liberals” and boasting about how he “splits” with his own party. “I split with my own party to support Trump’s border wall. … I voted to extend the Bush tax cuts,” he says.

The problem facing Democrats in conservative districts is no secret for the GOP: The White House tried to play the “socialist” card against the Democrats a few days ago. The report “The Opportunity Costs of Socialism,” written by White House’s Council of Economic Advisers, is a sloppy attempt to scare off potential Democratic voters by equating the USSR and Communist China with Nordic social democratic countries and, in short, anyone who calls themselves a socialist. Based on cherry-picked, dubious data and built on unscrupulously biased methods, the report could not withstand close scrutiny. Its goal is, undoubtedly, to associate the left wing of the Democratic Party with the Soviets, the Cuban communists and other U.S. enemies during the Cold War.

Shake-ups in the Last Stretch

In the last couple weeks of the campaign, some political developments have shaken up the election cycle. The MAGA bomber was embarrassing for his participation in Trump rallies and for his fanatic nationalism, bigotry and racism. The massacre at the synagogue in Pittsburgh, was harmed Trump and the GOP as well, for two reasons: On the one hand, the shooting itself has been blamed on Trump’s incendiary rhetoric and his “politics of hatred”; on the other hand, it reopened the debate around gun control, in which Republicans only stand to lose.

But Trump and Republicans have tried to call attention to another development that suits them like a glove: the anti-immigrant rhetoric against the migrant caravan helps solidify the GOP base. At the same time, Democrats have remained conspicuously silent about it, trying to walk a fine line between losing the more conservative voters (if they were to utter welcoming words for the refugees), and losing the Latino vote (were they to come out with a clear message against the caravan). If we add to this tepidness the fact that the caravan originated in Honduras, the same country where a military coup endorsed by Barack Obama overthrew democratic president Manuel Zelaya in 2009, then we have a full picture of the cold pragmatism guiding the decisions in the Democratic Party. Up until now, there has not been one voice among the progressive and self-proclaimed socialist Democrats who spoke in favor of admitting the migrants in the caravan into the country.

All forecasts anticipate that the Democrats will retake the House of Representatives, while Republicans will keep control of the Senate. There are over 100 competitive races, most of them for Republican-held seats in the House. Democrats need to win only 23 to establish a majority there, and it is very unlikely that they fail to do so. Two years into a presidency that has seen an unprecedented number of large protests and mobilizations, a radical change in the House should not surprise anyone. Although the chances in the Senate are slim, I would not discard a takeover thanks to high turnout of first-time voters and communities of color enraged by Trump’s policies, but it is a really long shot. On November 6, the Democratic Party will be catapulted to win back the control of the House, only to forget the boldest aspects in their platform, or blame the failure to achieve them on the GOP, the “bad cop” in the bipartisan consensus.