The Opportunity of the Present Moment

Trump’s ascension to power is weeks away. Left Voice presents a series by guest contributors on the current political conjuncture, the left, and prospects for party-building in the United States. 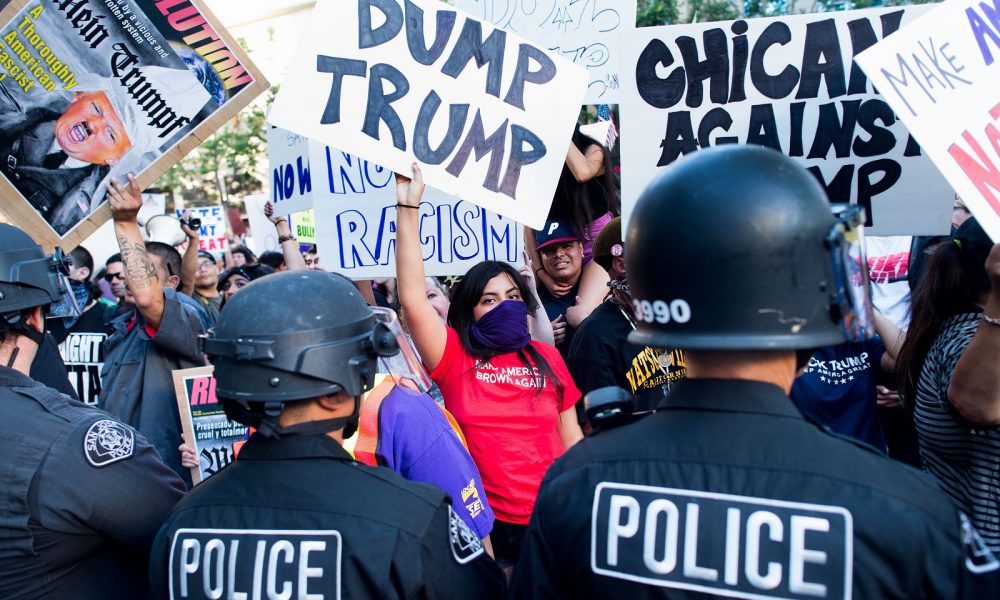 The surprise Republican triumph in the 2016 presidential election was very far from a socialist victory, but presents dangers that are at least more widely recognized than the more insidious campaigns of deportations and war that follow from wins by the Democrats. The yawning gap between a socialist vision and bourgeois electoral aspirations necessitates an immediate and total break with Republicans and, especially, Democrats.

Trump’s ability to win with such a small share of the potential U.S. electorate represents a profound rejection of the strategy and platform of the Democrats, and the fact that over 70 percent of eligible voters refused to vote for the only experienced politician in the race constitutes a dramatic protest against the neoliberal economic order as well.

The discrediting of mainstream forces opposing Trump reveals a void of leadership that is ready for a political force with a compelling perspective to fill.

While Trump’s ascension to power is, no doubt, an immediate victory for the right, it was not the favored strategy of capitalists prior to the election, and his opponents outside the capitalist class now have the chance to prove why that was the case. The discrediting of mainstream forces opposing Trump reveals a void of leadership that is ready for a political force with a compelling perspective to fill. Thus the radical left is confronted with its most fruitful opportunity for winning over large segments of the public in recent memory.

The political opening is auspicious for a number of reasons. First, the legendary repulsiveness of Trump’s behavior is shocking to anyone with any semblance of moral principle, and this includes a significant portion of those who voted for him. Second, any attempted implementation of his more extreme social policies would catalyze significant opposition. Third, despite his promises to “drain the swamp” by charting some alternate political course, Trump is filling his administration, in the main, with a cast of swamp-dwellers who are familiar faces in the business, political and military worlds. Trump’s bluster notwithstanding, it is evident that he is not controlling the establishment, but that the establishment is controlling him. Such discrediting associations are already being questioned by his populist following.

Fourth, a looming economic downturn, or even continued stagnation, will shatter any notion that Trump can deliver renewed economic prosperity to large sections of the U.S. In sum, Trump’s administration is set up for failure. His supporters will soon be seeking answers elsewhere.

Lastly, and perhaps most importantly, there are already significant populations that can be immediately won over to a more progressive platform without having to pry them away from Trump. The enormous popularity of the Bernie Sanders presidential campaign displayed the enthusiastic ranks ready and willing to break with the neoliberal agenda. Bernie’s support among youth, even segments that were wrongly thought to be comprising Hillary’s impregnable “firewall,” was particularly striking.

The response to a spate of despicable post-election intimidation and harassment directed against racial and religious minorities also demarcates a set of people searching for political solutions. The targeted groups and their concerned allies are mobilizing against any further repression, whether it be by the state or cowardly right-wing vigilantes. All of these layers would likely be receptive to a progressive political appeal.

On the other hand, the Democratic Party has singularly embarrassed itself as an institution for directing public opinion, and was quite rightly abandoned and disparaged by millions. The fact that even greater numbers of potential voters rejected both parties is a very good thing, and the debacle of the Democrats will only solidify workers’ implicit understanding that no capitalist government can reflect their interests. It would be a great mistake to try to convince them otherwise.

The passionate anger of the public with the economic and social system that the Trump and Sanders campaigns tapped has not dissipated. How to focus these resentments into a left-wing force is the burning issue for radicals today. In such circumstances, the question of left political organization rightly comes to the fore. Who will seize this political moment?