The Socialist Position On Reproductive Rights: Why Is This Even a Question?

From Nancy Pelosi to Tim Kaine, the Democratic Party has a long history of compromising on abortion rights in an effort to curry favor with religious “moderates.” Is it too much to ask that the socialist left hold firm? 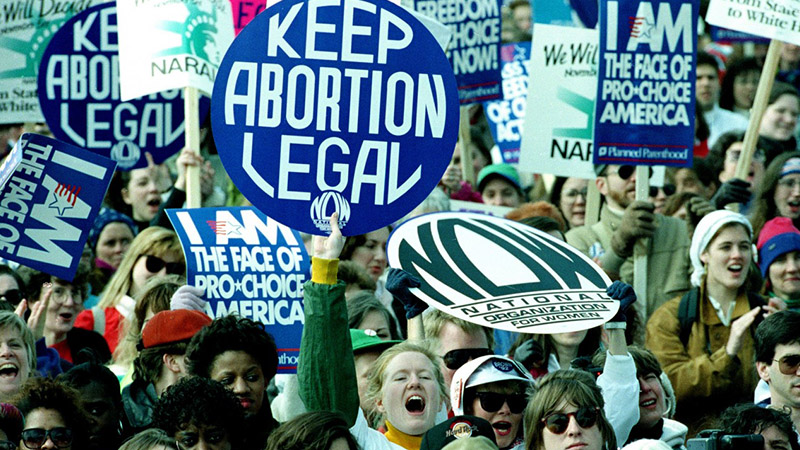 Earlier this week, Mississippi governor Phil Bryant signed a 15-week abortion ban into law, to date the most restrictive in the nation. Timed 15 weeks from a patient’s last period, the law contains no exception for rape, incest, or health of the patient — only one for if the pregnancy threatens the patient’s life or “a major bodily function.” (The risk of dying in childbirth presumably doesn’t count.) The bill represents yet another rollback of reproductive rights in the state, which previously had a 20-week ban on the books. A person seeking an abortion in MI already must undergo counseling and wait 24 hours, a tall order for anyone traveling from one end of the state to another to visit its sole remaining abortion provider.

On Monday, Republican lawmakers in Ohio introduced a bill to the state legislature that would ban abortion outright in an attempt to challenge Roe vs. Wade. If the bill passes (and is not overturned for being unconstitutional), the state would be obligated to prosecute both abortion doctors and abortion patients under existing homicide laws.

The Supreme Court will soon hear arguments in a case about whether or not states can regulate crisis pregnancy centers — “charities” run by anti-choice activists for the primary purpose of influencing patients’ decisions — ability to misrepresent themselves as legitimate medical providers and give out false medical information…often using taxpayer dollars.

At a recent anti-choice event in Nashville, TN, Vice President Mike Pence told of “great progress” towards outlawing abortion in the United States. “This will be the generation that restores life in America,” he bragged, rattling off a list of ways the Trump administration has restricted abortion access, including the reinstitution of the global gag rule. In a boast that could easily be repurposed to scare swing state “progressives” into voting for a Hillary Clinton style candidate, he added that reproductive choice could be completely outlawed “in our time.”

The details of this fight are less important than its broader meaning, but in brief: The self-described “pro-life socialist” writer Elizabeth Bruenig, a Washington Post columnist, attracted the ire of abortion rights advocates for appearing in a video produced by Jesuit publication “America” spotlighting millennial women who identify as pro-life, a.k.a. anti-choice. (That the video was made a year and a half ago did not excuse her in the eyes of those just discovering it, nor should it.) In it, the women lament how victimized they feel when people tell them — sometimes rudely — that they should stop trying to take away their fellow humans’ bodily autonomy. “It’s up to the next stage of the pro-life movement to reach out to millennials who already hold their views,” says Bruenig, an objectively provocative statement.

Bruenig’s views were no secret before; she’s written a number of op-eds that outline, with major holes, her vision for “pro-life” policy: Provide better access to contraception and material support for child rearing and abortions will go down, maybe. We must provide these services, of course, but is it really wise to marshal support for them on a promise that abortion rates will go down, when there’s little evidence that will happen? She has written in support of crisis pregnancy centers, which spread falsehoods and exist in inherent opposition to a person’s right to an un-coerced choice. (Can you imagine the crisis that would ensue if Planned Parenthood were found to be pushing patients in the opposite direction?) She opposes “criminalization” of abortion, but remains silent on all the other ways the state could restrict abortion access. She frames abortion as an immoral act, contributing to widespread stigma that’s already been shown to have a material impact on abortion access. When people tried to make her clarify what she believes, she said she’s not a politician and doesn’t like to talk about it, then deactivated her Twitter, as if she had not fired the first salvos on a topic of life-or-death import.

Bruenig’s views are hardly those of a theocratic fascist, but they’re not those of the mainstream American left, either, and the video came at a profoundly frightening time for anyone who cares about reproductive rights. This, combined with her visibility as one of few socialists with a mainstream media platform, prompted some members of Democratic Socialists of America to attempt to formally eject and de-platform her (remove her work from the DSA website) via online petition; when it turned out her membership had lapsed, they focused on the de-platforming. As of now, some of her writing on religion and socialism still appears on the DSA website. The particulars of this de-platforming campaign are not beyond critique. But when one of socialism’s most public faces has recently gone on the record as “pro-life” (which, contrary to how Bruenig would like to define it, has an unambiguous meaning in our current moment), it’s not out of the question to clarify which viewpoints the DSA will, and will not, make room for. There’s room for disagreement within the organization, but it’s crucial to draw a red line around basic human rights like this one.

The Bruenig-specific part of this saga came to an end when she pleaded ignorance of how crisis pregnancy centers operate and semi-apologized for endorsing them, if not for appearing in the anti-choice propaganda video. She promised to keep her anti-abortion views to herself from now on, a promise I have no reason not to believe she’ll keep. This satisfied most rational actors enough to move on. Still, the reactions of a subsection of mostly male socialists and their cool, contrarian female friends, both online and IRL, have me wondering if I should be worried.

If hundreds of Twitter mentions (and certain interactions with colleagues and listeners) are to be believed, those trying to hold leftist advocacy to a basic standard on reproductive justice are stirring up drama over nothing, destroying coalitions over petty disagreements , and engaging in gratuitous bullying. As if reproductive justice is a fringe issue that can be divorced from economics and the anti-choice movement does not have drastic material consequences for fully formed human beings, especially poor people and people of color. As if the tone with which we defend our rights matters more than our rights themselves. It’s always good to be civil, but this type of respectability politics often masks a deeper hostility to the arguments being made. (These are also the first people to call out “bourgeois civility” when centrist liberals try the same trick on them.)

There are those who believe Bruenig’s un-corrected rhetoric never posed any threat to reproductive rights, as if elite discourse doesn’t directly influence policy. An overlapping group of leftists confuse platform with coalition, saying we should make room in our movement for those with religious objections to abortion, as there are many of them in the international working class. Make no mistake: Groups of people who are personally, even politically opposed to abortion, are welcome to support socialist movements, with the caveat that we’ll make no policy concessions to them.

But that doesn’t mean we should have spokespeople within our ranks whose public positions are anything less than 100% pro-choice. (I’m not talking about Democrats, but actual socialists, although the lines have been looking blurry lately. It’s a topic for another day whether Bruenig is even a socialist or simply a New Deal Democrat. It is, however, relevant to note the Democratic Party has seen its own analogous struggle tip toward the pro-choice side, at least for the moment, although I’d never rely on it to safeguard such an important right.)

Then there are those who’d take it further than Bruenig herself, insisting socialist movements should be willing to compromise on reproductive rights if it gets us, say, Medicare-for-all. This is unacceptable. A healthcare plan that throws half the population’s rights under the bus is hardly universal. It might be better than what we have now, just like the incrementalist, neoliberal ACA was better than nothing. But it’s not what socialists should be fighting for.

It’s also important to draw a distinction between what’s popular and what’s right. Socialism is not about enacting what the majority says it wants, but what’s in the majority’s best interests, and making a compelling case for what that is. That people seek abortions in both red and blue states is further proof that it’s a universal need, regardless of political terrain. If you put it to a vote right now, socialism itself would almost definitely lose. That doesn’t mean we should abandon the whole project.

I’ll conclude with the cautionary tale of Nicaraguan president Daniel Ortega, a self-proclaimed Marxist Sandinista with a social democratic reformist program who caved to the reactionary religious lobby in 2006 by endorsing draconian restrictions on abortion without exceptions for rape, incest, or an unviable fetus that stands no chance of survival. (“Therapeutic abortion” had previously been legal in Nicaragua.)

In its first year alone, this law caused the deaths of at least 82 humans — actual people, not clumps of cells — most of whom were poor women. Much like rich Americans, rich Nicaraguans still have access to abortion care. It’s members of the country’s working class who are dying. It’s worth noting that while only Nicaragua, Chile, the Dominican Republic, and El Salvador ban abortion without exceptions for rape, fetal defects or maternal life, elective abortion is illegal throughout Latin America, with the exception of Cuba, Guyana, and Uruguay. None of the “leftist” Pink Tide governments have touched reactionary anti-abortion legislation.

As Karen Kampwirth argues in her article “Abortion, Antifeminism, and the Return of Daniel Ortega: In Nicaragua, Leftist Politics?” (Latin American Perspectives, Vol. 35, No. 6), this law was the result of Ortega’s FSLN party becoming “a less ideological party, advocating reconciliation rather than revolution,” a process that alienated more radical elements of the Sandinista movement in favor of devil’s bargains with the antifeminist right. This should go without saying, but Nicaragua’s antifeminist movement was not a bottom-up expression of fundamentalist awakening, but an alliance of powerful clerics, state ministries, and other right-wing forces reacting in complex ways to globalization and attempting to strip what was left of the Sandinista movement of its radical, feminist elements. Rather than the inspirational adherent of liberation theology some would paint him as, Ortega is an example of what happens when “Marxists” give up revolution, class struggle, and anti-imperialism to become self-serving, bourgeois politicians.

The DSA should no sooner give a platform to a “pro-life socialist” than it should a pro-choice neoliberal. The violent, often deadly, oppression of people who can get pregnant is not a matter of liberal identity politics, but a primary axis around which socialism must orient itself in addition to race and class. And with reproductive rights hanging in the balance both at home and around the world, the left can afford neither falter nor fracture. Our socialism will be intersectional or it will be bullshit.