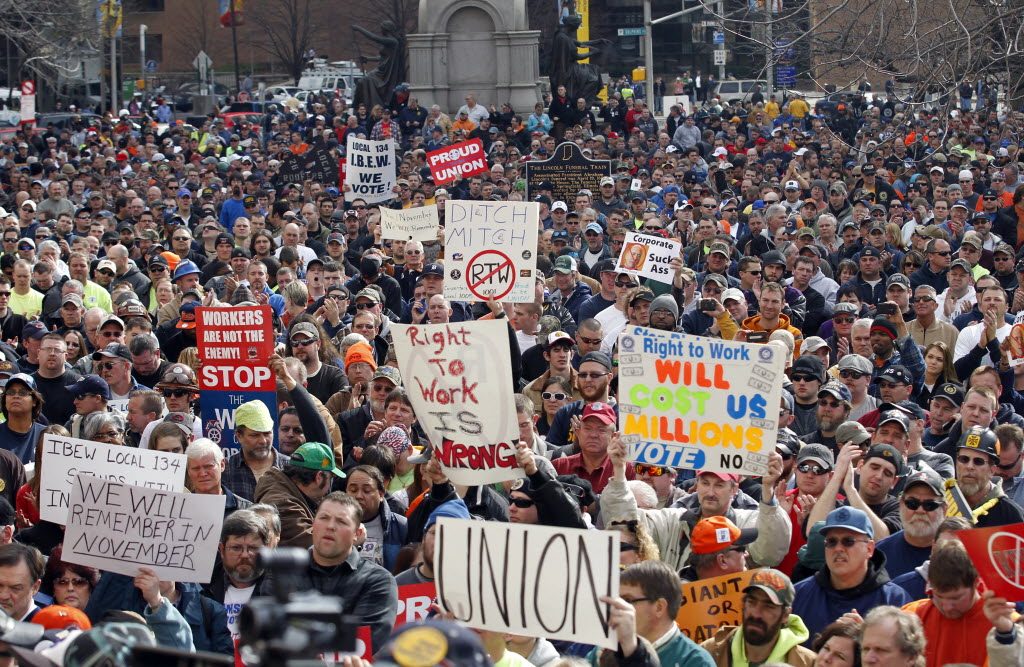 These laws, with their roots in the Jim Crow segregated South, have spread to 27 states. In every state where RTW has passed, the income of working class households has fallen and the unions have been weakened by attacking the unions’ dues base and the union shop.

Last week, the heads of the construction unions — the Carpenters, Laborers, Plumbers and Pipefitters, Sheet Metal Workers – met with Trump to talk about infrastructure spending, praising his decision to dump the Trans Pacific Partnership. Previously, AFL-CIO top Rich Trumka and Teamster head Jimmy Hoffa, Jr. had met with the President and expressed their willingness to work with him.Hopefully, these bureaucrats can come to their senses after their meetings with Trump and fight in the interests of working people.

The campaign for RTW began in the South, where reactionaries played on the fear that unions would lead to “race-mixing and communism.” Fourteen states passed RTW legislation by 1947, the same year the Taft-Hartley slave labor bill was enacted by Congress. One provision of Taft-Hartley made it legal for states to pass so-called Right-To-Work laws. In all, 27 states have passed such laws. The latest state to pass RTW is Kentucky, where the new GOP majority passed a law in their first days in office.

With the ascension of Trump to the White House and Republican majorities in both Houses of Congress, the danger of a national Right-To-Work Law is very real. Trump, playing the populist during the campaign, talked up his support for hard working union members. At the same time he was clear about his support for RTW. Forty three percent of union households reportedly voted for Trump.

“We’ve had great support from union] workers, the people that work, the real workers, [but I love the right to work,” Trump said.”I like it better because it is lower. It is better for the people. You are not paying the big fees to the unions. The unions get big fees. A lot of people don’t realize they have to pay a lot of fees. I am talking about the workers. They have to pay big fees to the union. I like it because it gives great flexibility to the people. It gives great flexibility to the companies.”

The passage of a National RTW law would be the culmination of more than 30 years of a one-sided class war against US workers. This union busting frenzy kicked into high gear with Reagan’s destruction of the PATCO air traffic controllers’ strike and has continued as unions have been pushed to the wall with demands for concessions.

Fighting RTW must be one of the main priorities of the labor movement and the left in the coming period. Our goal should not be limited to stopping this reactionary anti-worker legislation. Instead, we should be strategizing a road forward that rolls back RTW and builds union power in the workplace and society.

We have to turn the defensive struggles against the attacks of workers and the oppressed into an offensive against the capitalist system. Continued subordination of the unions to the Democrats only helps to reinforce our weaknesses. Building trades tops who met recently with Trump noted that not once during Obama’s two terms did he meet with union leaders. Candidate Obama, during the 2008 campaign, had promised to lace on “a pair of comfortable shoes and…walk on that picket line with you…” Early in Obama’s first term, when the Democrats controlled both houses of Congress, they failed to pass any meaningful pro-labor legislation. The often-promised Employee Free Choice Act was forgotten. We can’t depend on capitalist courts or politicians to defend us. It is only through the independent self-organization of working people that we can prevail.

Mass mobilization, united front mass actions and political independence are crucial elements of a fight back. Looking at the struggle in Wisconsin against anti-worker legislation put forward by Scott Walker, the labor movement and its allies hit the streets and occupied the Capitol in defiance of court orders and intimidation. The movement faltered when it was diverted into campaigns for Democrats — some of them with poor records on labor questions. Since the passage of the Wisconsin law, union membership in that state has fallen by 40 percent. Prior to the law, about 8 percent of the workforce in Wisconsin were union members. Wisconsin has lost more than 136,000 union members since 2010.

The labor movement should take a page from the recent Women’s March and the mobilizations in solidarity with immigrants following Trump’s racist Muslim ban. Now is not the time for business as usual. Now is the time to mobilize the power of the working class. Mass mobilization is just one weapon in our arsenal. Work stoppages and other jobs actions are necessary. This includes preparing union members and their supporters to engage in a general strike.

The general strike is a tactic that has rarely been employed in the US. The Great Railroad Strike of 1877, which lasted 45 days, involved thousands of workers in five states. Pennsylvania was the center of intense strike action. During the strike waves of the 1930’s, the general strike was used in Minneapolis during the Teamster strike and in San Francisco when the longshore strike there spread beyond the waterfront. Probably the most famous US general strike occurred in Seattle in 1919. The Seattle strike lasted for 5 days and idled 65,000 workers. The general strike committee ran the city of Seattle making sure essential items like milk for children were delivered. The Seattle action resulted in a temporary dual power situation. The question of the general strike is a serious one for revolutionaries requiring preparation inside the unions and other working class organizations.

In the struggle against Trumpism, we should give our trust only to reliable allies. Too often, Democrats have taken money and support from unions only to stab us in the back later. Tim Kaine’s support for RTW is one example. Another is Democratic NJ Senate President Steve Sweeney’s alliance with GOP Governor Chris Christie’s attack on New Jersey public employees. Sweeney, an official of the Ironworkers’ International union, scabbed against teachers and state workers in a detestable manner. Too often, private-sector unions have lined up against public sector unions.

Building real solidarity, including unconditional support for the struggles of other workers, is essential. Our unions must be re-energized with the type of spirit our predecessors possessed when they built the CIO. We must build fighting unions instead of groveling for crumbs at the bosses’ table.

This article was originally published on Resistance: A Journal of Marxist Politics