This is Class War. Time to Act Like It

The Trump tax plan is an unprecedented attack on working class people. We must organize against the tax cuts for billionaires using working class tactics. 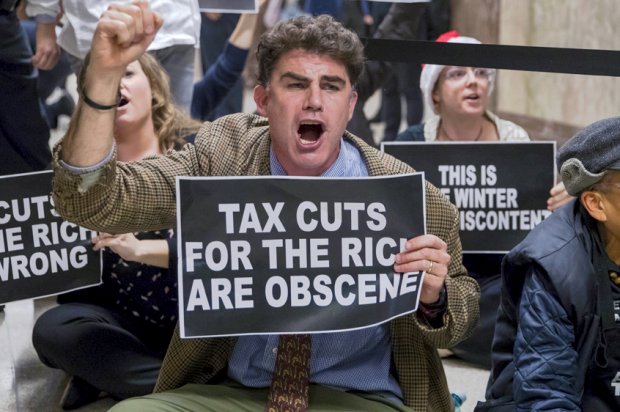 The Trump administration is nearing a badly needed legislative victory after the embarrassing failure to repeal and replace Obamacare. Amid the continued Russia probe — with Flynn pleading guilty to lying to the FBI — the Republican party galvanized enough support to come a step closer to passing the largest tax cut for corporations in recent decades. In a 51-49 vote, the Senate approved Trump’s desired tax plan.

It is described as an “act of class war,” not only by Left Voice authors, but also by the capitalist media. The New York Times Editorial says, “the Senate passed a tax bill confirming that the Republican leaders’ primary goal is to enrich the country’s elite at the expense of everybody else, including future generations who will end up bearing the cost.”

The bill was rushed through the Senate, as the Republicans found themselves desperate to get something done. On November 28, the bill left the Senate Committee. Three days later, at 2 am on Saturday, December 2, the bill passed the Senate. A 500-page long document, the bill had not been analyzed in depth and was largely inaccessible to the larger public before the Senate voted. Furthermore, just before the vote, Senators continued to receive hand-written, last-minute addendums to the bill — many of which were impossible to decipher.

What transpired on the Senate floor flies in the face of democratic processes. It is a slap in the face to the American people, who were not given a chance to even know what was in the bill before it was rammed through the Senate at 2 am. The Republicans have made clear that they don’t care what anyone thinks about their bill and they don’t even want to put up a facade of democracy. They want only a legislative victory for Christmas.

The major tenet of the Senate bill, slightly different from the one passed in the House of Representatives, is the tax breaks for the wealthy. Both reduce the corporate tax rate from 35% to 20%. The bill also raises taxes for people making $30,000 and less per year, and in 10 years, it would raise taxes for everyone making $75,000 or less. According to the Joint Committee of Taxation, this would reduce federal revenues by $1.5 trillion over the next decade.

Lily Batchelder, a New York University professor says, “The bill is investing heavily in the wealthy and their children — by boosting the value of their stock portfolios, creating new loopholes for them to avoid tax on their labor income, and cutting taxes on massive inheritances.”

In order to get this bill passed, the Republicans in the Senate included all sorts of provisions that don’t have too much to do with taxes. These include:

-A nod to the pro-life movement, reminding everyone that Republicans are waging a war against women. The bill refers to a college savings account for “unborn children.”

-The bill lifts the ban on churches (and other non-profits) from participating in politics. This would mean that churches could legally fund political parties.

-It permits oil and gas drilling in protected areas in Alaska’s National Wildlife Refuge — an area that Gwich’in indigenous people live, as well as the home to endangered species such as caribou, polar bears and muskoxen. This land represents 5% of artic Alaska which is not open to oil and fracking companies; the other 95% is open thanks to provisions made under the Carter administration in the 80’s. This part of the bill is a clear nod to Lisa Murkowski (R-Alaska), one of the Republicans who threw a wrench in the Obamacare repeal.

-After the failure to repeal Obamacare and replace it with yet another, worse system, the tax plan also takes a swipe at the Affordable Care Act, ending the individual mandate from that forces people to purchase insurance.

Because slightly different versions of the tax bill passed both the House and the Senate, the conference committee made up of Congressional Republicans will meet to reconcile these differences. The bill will then be sent back to the House and Senate for full votes. Lastly, it will be sent to President Trump to sign into law. Some of the differences bewteen the two plans are:

– Healthcare: the House bill eliminated the deduction for health expenses that exceed 10% of someone’s adjusted gross income. The Senate bill proposes to bring this down to 7.5%– but only for two years.

– The Senate bill has 7 tax brackets, while the House bill has four.

Trump has said that he wants the bill on his desk before Christmas, which seems like a likely scenario. However, there is still time to fight back. As Trump’s popularity drops and the Russian investigation creeps closer, we can still defeat this bill, although it will be an uphill battle.

What will the consequences of this be?

The Republicans, who have always been obsessed with the national debt (except when voting for the military budget), have suddenly decided to ignore it in order to pass this tax bill, which would add 1.5 trillion to the debt over the next decade.

However, the Republicans have only temporarily shifted their attention away from the debt. They are sure to become concerned with the issue again when it comes to social security, healthcare, education and other social services. Marco Rubio said this explicitly in an interview: “We have to do two things. We have to generate economic growth which generates revenue, while reducing spending. That will mean instituting structural changes to Social Security and Medicare for the future.” In other words, tax cuts for the rich and at the same time, cutting services for most of the American people.

As is to be expected, the general thrust of the strategy by the Democrats was to call your Senator to urge them to vote “no” on the tax plan. The impotence of this strategy is exceedingly clear, as the Republicans pass the tax plan without blinking an eye. Only one Republican voted against it.

Why wouldn’t they? The Republican National Committee is racking up record high donations. As Newsweek correctly states, “Trump gives rich donors massive tax cuts, then asks them for campaign donations.” How much effect does a phone call have compared to millions of dollars for a reelection campaign? Passive resistance via facebook or even a phone call is insufficient.

There were some mobilizations against the tax plan, usually numbering a few dozen to a few hundred. There were campus walkouts across the country, particularly as the Senate bill threatened to consider tuition costs as taxable income.

I love #NYC. @realDonaldTrump gets a welcome to @Cipriani on 42nd St this AM from @riseandresistny. Let’s see which cities and towns can up the ante. No safe harbor for any Republican. Follow them home, to their offices, to their watering holes. No justice. No peace. #TaxScamBill pic.twitter.com/TbJgLipU48

This is a class war. Time for us to Act like it

Throughout history, capitalists and their politicians have waged class war against the workers. This tax plan is an act of class war and a naked expression of the policies put forward by Democrats and Republicans that have allowed the wealth gap in the US to climb to exorbitant rates. Since the 1950’s, the top 1% has doubled its share of the national income from less than 10% to more than 20%.

During the past few decades, this war has become an asymmetrical one, characterized by capitalist attacks against the working class. It is time to fight back. We must urge our unions to organize against this tax plan. We must call on left organizations — the DSA, the ISO, and Socialist Alternative, to name a few — to organize mobilizations on the streets as well as in every workplace and place of study. We must take to the streets with environmental groups, women’s groups, workers organizations, and unions to fight this; it is an attack on all of us.

And, given that this is class war, it is time to remember and reclaim the weapons of class struggle: protests, pickets, and strikes. The wealthy have their own political parties to do their dirty work. We must organize ourselves against the capitalists and their tax cuts using our own tactics, our own strategy, and our own working class party.