Last weekend, almost 100 people gathered in the Catalonian coastal town of Palamós for a summer school. The Revolutionary Workers Current (CRT) invited workers and youth for a weekend full of discussions, debate and relaxation. 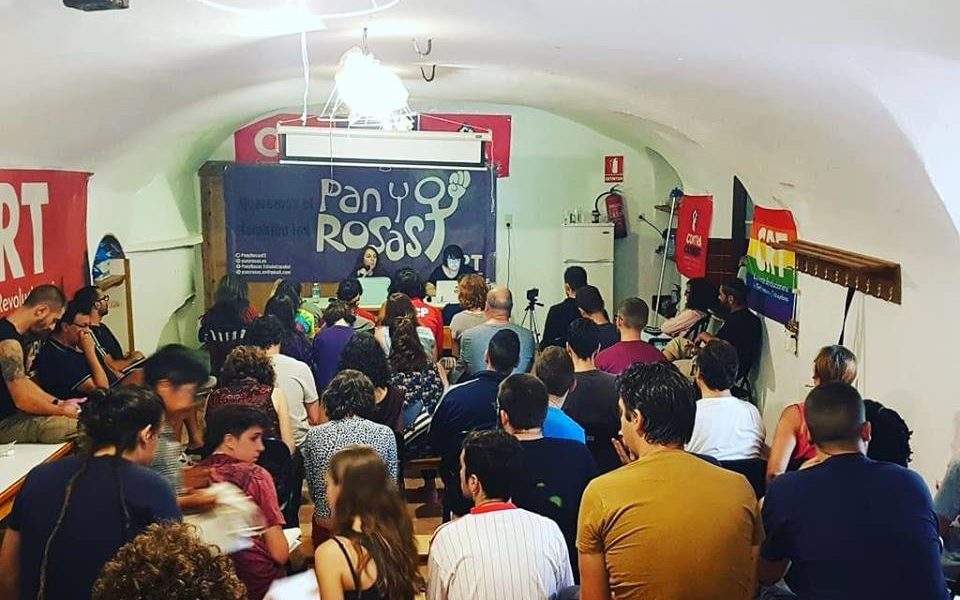 “We are the death of capital!” (“Somos la muerte del capital”) the young people chanted in Spanish as they jumped around on a rooftop terrace after midnight. “We are Trotskyists of the Fourth International!” On Saturday evening almost 100 people participated in meeting under the stars. Speakers from Barcelona, Paris, Bologna and Berlin spoke about the 80th anniversary of the foundation of the Fourth International and its relevance for today.

This nighttime meeting was the highlight of the summer school of the Revolutionary Workers Current (CRT in Spanish and Catalán), which took place from Friday to Sunday. Workers and youth from Barcelona, Madrid, Zaragoza, Vigo and other cities of the Spanish State had gathered in Palamós, a sleepy vacation town on the Costa Brava an hour north of Barcelona.

The school opened with a report from Santiago Lupe, a CRT leader, about the deepening crisis of the Spanish regime, which was especially shaken by the Catalán independence movement last year. Lupe described the kind of revolutionary left that is necessary to unite the struggles of women, youth, immigrants and oppressed nationalities under the banner of the proletariat.

A second panel showed the strong presence of workers at the school. A member of the internal commission of Amazon in Madrid spoke about their recent strikes for a collective contract – the police beat and arrested several workers in order to defend the interests of the richest man on the planet. A hotel cleaner spoke about the campaign “Las Kellys” in Barcelona which is fighting for trade union representation for outsourced cleaners. A domestic worker spoke about how racist laws force immigrants into jobs in private households without legal protections. A worker from Telepizza spoke about the need to force the unions into a united front, to struggle against precarious working conditions.

The school featured several large workshops per day. A workshop led by Cynthia Lub and Marta Clar debated the intersection of gender and class. Josefina Martinez spoke about reform vs. revolution, using debates between Karl Kautsky and Rosa Luxemburg from 1910 to develop a critique of neo-reformism of Podemos, Syriza and similar formations. Diego Lotito developed a balance sheet of the center-left “post-neoliberal” governments of Latin America in the last ten years. There were also special meetings of the socialist feminist women’s group “Pan y Rosas” (Bread and Roses) and the new anticapitalist youth group “Contracorriente” (Against the Current).

The summer school showed the growth of the CRT in the last year, in terms of both political and material accumulation – especially the large presence of workers from different struggles was impressive. The new center-left party Podemos, which is supported by some sectors of the anti-capitalist left, is continuously watering down its reformist program in the hopes of joining a government with the Social Democracy. This, combined with the ongoing political, economic and social crisis in the Spanish state, will make Trotskyist proposals interesting for broader sectors of workers and youth. At the end of the summer vacations, the CRT is well prepared to intervene at universities and workplaces.